Jared Diamond's Guns, Germs and Steel became a seminal work of scholarship for me when it was released in 1997. Diamond, an volutionary biologist, posed an intriguing question: Why did the Spaniards sail to Peru and conquer the 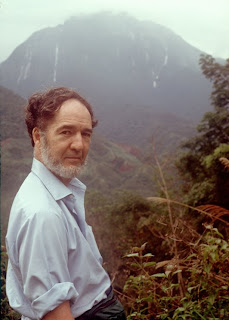 Incas and not the other way around?

His answer is complex, but basically boils down to geography, demography and luck, also known as ecological happenstance.

Guns, Germs and Steel was a bestseller and subject of a terrific PBS documentary, but Diamond has been dogged by controversy, including allegations that he is a racist.

I happen to think that much of the criticism is garden-variety peer envy, but Diamond now finds himself in some pretty deep do-do.

Diamond was born in Boston, Massachusetts to a Polish-Jewish family. His father was a physician and his mother a teacher, musician and linguist. He attended the Roxbury Latin School, earned his A.B. degree from Harvard College in 1958 and his Ph.D. in physiology and membrane biophysics from the University of Cambridge in 1961. After graduating Cambridge he returned to Harvard as a Junior Fellow until 1965 and in 1968 became Professor of Physiology at UCLA Medical School. While in his twenties, he also developed a second, parallel, career in the ornithology of New Guinea, and has since undertaken numerous research New Guinea and nearby islands. In his fifties, Diamond gradually developed a third career in environmental history and become a Professor of Geography at UCLA, his current position.[1]

The book overlooks things like gene-culture co-evolution which could also contribute to population differences (eg. 'The 10,000 Year Explosion: How Civilization Accelerated Human Evolution').