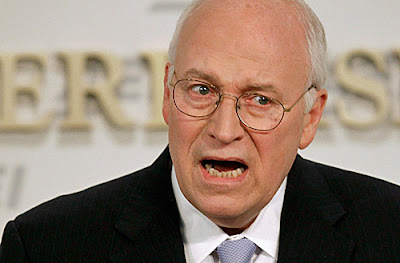 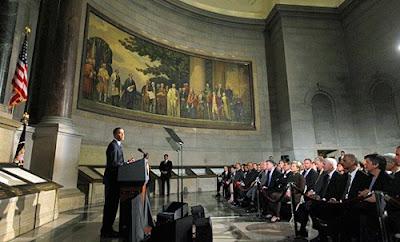 Two things were certain beforehand about the Barack Obama-Dick Cheney national-security cage match today: No minds were going to be changed by the back-to-back speeches delivered by the president and former vice president, and it would be beyond obvious that these two men live in very different universes.

If you found justifiable the extraordinary and extralegal excesses of the last eight years, including a torture regime coordinated by Cheney and a military tribunal system that could claim a mere three convictions out of nearly 800 detainees while disgracing America in the eyes of the world, then you took heart in his latest effort to sabotage the Obama presidency before a friendly audience at the conservative American Enterprise Institute.

If you believe that it is time to begin cleansing the government stables of the Bush administration's offal, then you took heart in Obama's speech at the National Archives, the home of the the Constitution and other bedrock documents that embody America's system of government and justice but were observed in the breech, and often ignored, over the last eight years.

The president reiterated his determination to close the prison at Guantánamo Bay despite growing pressure from scaredy-cat congressfolk, and without using the word "excesses" or other loaded language, stressed that the Bush administration had undermined rather than strengthened America's safety.

Obama reaffirmed his determination to provide the resources for the war in Afghanistan that his predecessor had diverted to Iraq. He noted, which the news media has not, that his administration's hands have been substantially tied by judicial rulings flowing from all of the offal and did not note, as the news media has, that he still reserves the right to use some of his predecessor's more execrable practices.

The former vice president had no time for niceties and his nuance-free bunker mentality and passion for castigating and mischaracterizing his enemies was on full display. He also barely mentioned George Bush in relentlessly beating his own drum.

Cheney accused the Obama administration generally and House Speaker Nancy Pelosi specifically of feigned outrage and using a false narrative to misrepresent the Bush administration's efforts to make American safe. He defended the use of torture as necessary, yet again asserted that thousands of American lives had been saved since there have been no attacks on the homeland since 9/11, and criticized the decision to close Guantánamo as hasty and ill-thought.

The subtle but familiar subtext of Cheney's speech was that those who did not support the Bush terror regime were unpatriotic, as well as Al Qaeda coddlers, and by even debating torture we are playing into terrorists' hands.

"Here is the great dividing line in our current debate over national security. You can look at the facts and conclude that the comprehensive strategy has worked, and therefore needs to be continued as vigilantly as ever. Or you can look at the same set of facts and conclude that 9/11 was a 'one-off' event -- coordinated, devastating, but also unique and not sufficient to justify a sustained wartime effort. Whichever conclusion you arrive at, it will shape your entire view of the last seven years, and of the policies necessary to protect America for years to come. . . .

"There is never a good time to compromise when the lives and safety of the American people are in the balance. . . .

"Behind the overwrought reaction to enhanced interrogations is a broader misconception about the threats that still face our country. You can sense the problem in the emergence of euphemisms that strive to put an imaginary distance between the American people and the terrorist enemy. Apparently using the term 'war' where terrorists are concerned is starting to feel a bit dated. So henceforth we're advised by the [Obama] administration to think of the fight against terrorists as, quote, 'Overseas contingency operations.' In the event of another terrorist attack on America, the Homeland Security Department assures us it will be ready for this, quote, 'man-made disaster' -- never mind that the whole Department was created for the purpose of protecting Americans from terrorist attack.

Another term out there that slipped into the discussion is the notion that American interrogation practices were a 'recruitment tool' for the enemy. On this theory, by the tough questioning of killers, we have supposedly fallen short of our own values. This recruitment-tool theory has become something of a mantra lately, including from the president himself. And after a familiar fashion, it excuses the violent and blames America for the evil that others do. It’s another version of that same old refrain from the Left, 'We brought it on ourselves.' "

And from Obama's speech:

"I believe with every fiber of my being that in the long run we also cannot keep this country safe unless we enlist the power of our most fundamental values. The documents that we hold in this very hall . . . are not simply words written into aging parchment. They are the foundation of liberty and justice in this country, and a light that shines for all who seek freedom, fairness, equality and dignity in the world. . . .

"Unfortunately, faced with an uncertain threat, our government made a series of hasty decisions. And I believe that those decisions were motivated by a sincere desire to protect the American people. But I also believe that -- too often -- our government made decisions based upon fear rather than foresight, and all too often trimmed facts and evidence to fit ideological predispositions. Instead of strategically applying our power and our principles, we too often set those principles aside as luxuries that we could no longer afford. And in this season of fear, too many of us -- Democrats and Republicans; politicians, journalists and citizens -- fell silent. . . .

"Right now, in distant training camps and in crowded cities, there are people plotting to take American lives. That will be the case a year from now, five years from now, and -- in all probability -- ten years from now. Neither I nor anyone else can standing here today can say that there will not be another terrorist attack that takes American lives. But I can say with certainty that my Administration -- along with our extraordinary troops and the patriotic men and women who defend our national security -- will do everything in our power to keep the American people safe. And I do know with certainty that we can defeat al Qaeda. . . .

"This must be our common purpose. I ran for President because I believe that we cannot solve the challenges of our time unless we solve them together. We will not be safe if we see national security as a wedge that divides America -- it can and must be a cause that unites us as one people, as one nation. We have done so before in times that were more perilous than ours. We will do so once again."

My sum-up is that there was an utterly weird dynamic at work here that has been bubbling beneath the surface for some time now: Obama inherited a mess, including myriad foreign-policy failures beyond the Iraq and Afghan wars, that were substantially Cheney's doing, but the former vice president in so many words castigated the president for trying to clean up his mess.

Cheney flailed and castigated, as always has been this demagogue's wont, while Obama was sober and teacherly, as has been his. There were no surprises in either speech, but we can thank God that it is Obama who is in charge and not Cheney.

Obama said we lost our way in fighting terrorism but we are still on the path. We haven't been attacked since 9/11. We are handling terrorism just fine, thank you.