Is Dick Cheney A War Criminal?

Lawrence Wilkerson, a former Army colonel, chief of staff to Secretary of State Colin Powell and a Republican, has been a thorn in the side of Bush torture regime apologists because as an insider he is able to 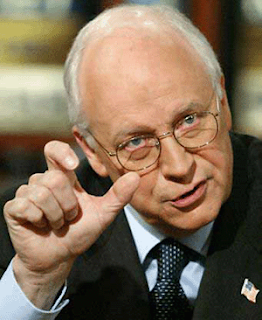 credibly debunk their screed in a way that someone like myself who is working with second-hand information cannot.

Wilkerson, responding to Dick Cheney's latest blasts about how torture saved many lives, puts the former vice president in his place and then some by noting that the administration authorized torture in April and May of 2002 -- well before the Justice Department had rendered any legal opinion -- in a manic effort not to make the homeland safe against future 9/11-type attacks, but to find a smoking gun linking Iraq to Al Qaeda.

So furious was this effort, says Wilkerson, that

"Even when the interrogation team had reported to Cheney's office that their detainee 'was compliant' (meaning the team recommended no more torture), the VP's office ordered them to continue the enhanced methods." 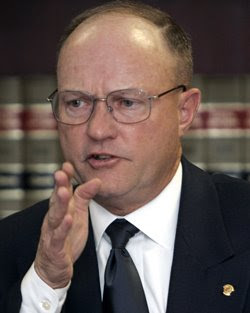 And then this rejoinder:

"When will someone of stature tell Dick Cheney that enough is enough? Go home. Spend your 70 million. Luxuriate in your Eastern Shore mansion. Shoot quail with your friends -- and your friends.

"Stay out of our way as we try to repair the extensive damage you've done -- to the country and to its Republican Party."

To summarize: The vice president of the United States ordered the use of torture to extract false confessions in order to start a war in which more than 4,000 Americans and a shitload of Iraqis have died.

Seems an awful lot like a war crime, no?

Meanwhile, Cheney's request for the CIA to declassify some terror documents has been turned down. The reason is pretty hilarious.

Posted by Shaun Mullen at 12:38 AM
Email ThisBlogThis!Share to TwitterShare to FacebookShare to Pinterest