The Senate Debate That Never Was 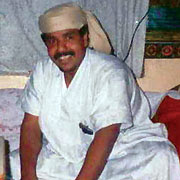 Lyle Denniston, the veteran U.S. Supreme Court reporter, has unearthed a lulu of a side story pertaining to Hamden v. Rumsfeld, a very important presidential war powers case being heard today by the Supremes.

Salim Hamdan (left), who admits that he was a bodyguard for Osama bin Laden in Afghanistan, was captured by U.S. forces and hustled off to the brig at the U.S. Navy base at Guantanamo Bay, Cuba. At issue is whether a military commission (a special war court created to try Hamdan and other detainees) is constitutional.

That's the main event. The side story pertains to an amicus (friend of the court) brief filed by Republican Sens. Lindsey Graham of South Carolina and John Kyl of Arizona. At first glance, it appears to be the transcript of a floor debate on enemy combatants.

As the eagle-eyed Denniston has ascertained, Graham and Kyl constructed their colloquy to make it appear that the statements were uttered on the Senate floor. It contains phrases like "I would like to say a few words" and "I see that my colleague, the senior senator from South Carolina, is also on the floor."

Turns out the whole thing was fabricated and inserted into the Senate record.

Why should any of this matter? Because if our public officials intentionally mislead about little things, it's more than likely that they'll do the same about big things.

Denniston blogs on the Graham-Kyl sleight of hand here and has more on Hamdan v. Rumself here.

SCALIA'S AT IT AGAIN . . .
Justice Antonin Scalia is a man of many talents: Right-wing fruitcake, loose cannon, serial obstructionist, maker of obscene gestures, vice presidential duck hunting buddy. I could go on and on . . .

Hizzoner has been asked to recuse himself (step aside) when the court hears Hamdan because of remarks he made earlier this month in Switzerland that indicate that he had made up his mind about the case before hearing testimony.

Speaking on March 8 to an audience at the University of Freiburg, Scalia reportedly said it was "crazy" to suggest that enemy combatants should receive a "full jury trial" and dismissed suggestions that the Geneva Conventions might apply to Guantanamo detainees, which is exactly what Hamdan's lawyers will argue.

. . . AND AGAIN
Scalia also has been in the news for flipping the bird (an obscene gesture involving the middle finger) at a reporter while emerging from mass at a Boston church on Sunday.

More here.
Posted by Shaun Mullen at 10:43 AM
Email ThisBlogThis!Share to TwitterShare to FacebookShare to Pinterest