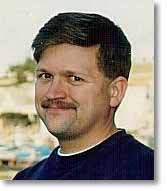 Anyhow, 1995 was the year that an obscure computer engineer by the name of Paul A. Flaherty changed my life -- and the lives of hundreds of millions of computing souls forever -- by inventing the first Internet search engine that could index the World Wide Web, thereby ushering in the dot.com era.

Flaherty, who died earlier this month at age 42, developed the AltaVista search engine at Digital Equipment Corporation's laboratories in Palo Alta, Calif., as a way of promoting DEC's computers.

The original AltaVista search engine could index a puny 16 million Web pages, but within three weeks was handling two million requests each day. That number grew to 22 million within a year.

The rest, as they say, was history.
Posted by Shaun Mullen at 12:32 PM
Email ThisBlogThis!Share to TwitterShare to FacebookShare to Pinterest