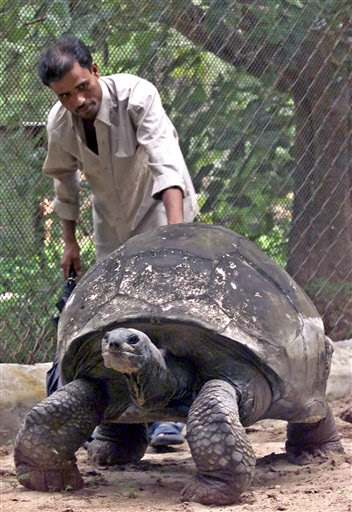 He lived through the Industrial Revolution, two world wars and the Space Age, but Adwaitya finally has packed it in at age 250 or so.

The giant Aldabra tortoise died at the Calcutta Zoo of liver failure.

The earliest years of Adwaitya, which means "the one and only," are a mystery, but records show that British sailors captured him and four other Aldabra tortoises from an atoll of that name in the . He was presented to the legendary British general Robert Clive of the East India Company and spent several years on Sir Robert's sprawling estate before he was brought to the zoo about 130 years ago.

If Adwaitya's age is proved by a post mortem, which will include carbon-dating of his shell, he will take the longest-lived crown from Tui Malila, another tortoise with connections to the .

Tui Malila was presented to the Tongan royal family by Captain Cook in either 1773 or 1777 and remained in their care until its death from natural causes in 1965, meaning that he was about 190 years old.