(UPDATED) Trump's 400-Pound Guy Strikes Back As Tyranny Looms In The U.S.


The mastermind behind the pipe bombs targeting prominent Democrats and Lefties has been identified: It's that 400-pound guy sitting on his bed hacking into the Hillary Clinton campaign whom Donald Trump famously called out in one of his countless denials that Russia was helping him become president.

"It could be Russia," Trump said during the first presidential debate on September 27, 2016 when confronted with evidence of Kremlin meddling.  "But it could also be China," he quickly added.  "It could also be lots of other people.  It also could be somebody sitting on their bed that weighs 400 pounds, okay?"

Do not misunderstand me.  This is not an attempt to make light of a terrible if inevitable situation, and that 400-pound guy is merely a metaphor for Trump's unwillingness to take responsibility and deflect blame on others.

The situation is inevitable because Trump, having been "elected" because of the real hackers, has been on a two-year bender of increasingly violent rhetoric.  We can even put a date on when that bender commenced.  It was the second presidential debate two weeks after the 400-pound guy rejoinder when nominee Trump took advantage of the town hall format by stalking Clinton rather than sitting on his own fat ass.

Actually, a real suspect in the bombings was arrested on Friday morning -- a 56-year-old man with a lengthy criminal history whose van was plastered with pro-Trump and conspiracy theory stickers.  Surprised?

It does not matter that in the closing days of a midterm election campaign that could flip the balance of power in Congress and open the floodgates to investigations into the president's myriad high crimes and misdemeanors, as well as a convulsion of indictments from Special Counsel Robert Mueller, that Trump is doubling down on what worked in 2016.

This is whipping his white and mostly male supporters into hysteria over people of color, women, the news media as that caravan of Trumpian lies -- it's Middle Eastern terrorists disguised as immigrant families! -- wends its way toward the wall-less U.S. southern border. 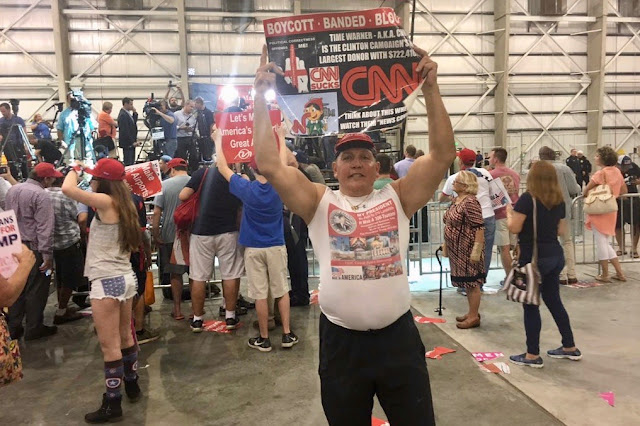 What matters is that a direct line can be drawn between Trump's rhetoric, Fox News's breathless commentaries and the pipe bomber's targets -- the first black president and his vice president, the first woman to be a major party's presidential nominee, a Jew frequently targeted by anti-Semites, other African-Americans and women, and CNN.

It is hardly worth mentioning that when a natural disaster or mass shooting occurs, we expect the president to speak to common purpose and unity.  But Trump predictably mumbles a scripted response and then undercuts that message with radioactive comments.  This time Trump declared with a repulsive smirk that "We have to unify. We have to come together" at a raucous campaign rally on Wednesday night in Wisconsin after the first pipe bombs were discovered before predictably going on the attack and blaming the victims.

The pipe bomb maker sought to make the devices more deadly by mixing bits of metal and glass in with the black powder, so we can imagine the carnage had the device mailed to Robert DeNiro's production company in TriBeCa in Lower Manhattan gone off.  But there is a even greater peril: The shrugs Trump's rhetoric produces as it seeps into the consciousness of a nation moving toward tyranny.

In one respect, Trump is getting too much credit.  To call the 2016 election a fluke is a mistake.

America has been inching toward tyranny one bombing at a time for decades.  Think White Citizens Councils conspiring to murder little girls by blowing up churches.  The bombing of abortion clinics, synagogues, the Murrah Federal Office Building, Olympic Park in Atlanta and the finish line of the Boston Marathon.  The Unibomber.

But with the advent of Trump has come the perfect made-for-primetime vessel for all that hate because Trump hasn't suffered political consequences for his criminality and multiple treasons.

At least not yet.

At another raucous rally in Montana last week, a Trump supporter incited by Trump's praise of a congressman who body-slammed a reporter, looked directly at CNN reporter Jim Acosta, then ran his thumb across his throat and laughed.

Acosta described the throat-slashing gesture as "the Trump effect," which was his way -- an inexcusable way considering the CNN reporter's responsibility to a huge audience -- of normalizing Trump's violent rhetoric.

Jeff Zucker, Acosta's big boss at CNN, blew an opportunity when he responded to the pipe bomb attacks by sermonizing that "There is a total and complete lack of understanding at the White House about the seriousness of their continued attacks on the media."

These people know exactly what they're doing.  As does Fox Business News host Lou Dobbs, who in a tweet he later deleted, wrote "Fake News–Fake Bombs.  Who could possibly benefit by so much fakery?"

As if on cue, a pious Trump tweeted on Thursday morning that "A very big part of the Anger we see today in our society is caused by the purposely false and inaccurate reporting of the Mainstream Media that I refer to as Fake News. . . . Mainstream Media must clean up its act, FAST!"  Which led to an emerging White House meme that CNN had brought the pipe bomb threat on itself.

Has the news media finally arrived at the point where it will say enough is enough in service of what remains of its credibility?  Except for a few outliers like The New York Times, The Washington Post and more recently CNN after the cable news network was one of Trump's prime enablers in 2016, I doubt it.  When Trump pushes, the media will dutifully cower.

What is not in doubt is that we are being traumatized by a madman and his gaslighting surrogates, including alt-right groups whose hateful online attacks on the pipe bomb targets have become so much background noise that they are barely noticed anymore, let alone remarked on.

We keep saying that it can't happen here.  Well, America, it's happening.

Posted by Shaun Mullen at 10:02 AM
Email ThisBlogThis!Share to TwitterShare to FacebookShare to Pinterest

I am getting the same feeling I got before the 2016 election: dread.

There are plenty of women (and children) in those crowds behind Trump at his campaign rallies. They are more well dressed than some of the crowd pictured in 2016. We should feel dread and take someone (or more) to the polls with you next week.

Buna Treks & Expedition Pvt. Ltd. said...
This comment has been removed by a blog administrator.
6:03 AM

Is it “too soon” to say mass murder IS “imaginable,” not at all “hard to believe,” that it’s no longer a “shock,” and that a huge part of the current public wave of prejudice in the nation is attributable to a presidential candidate’s opening salvo of his 2016 campaign?
Is it “too soon” to say that a president’s initial utterance about a tragic mass-death toll arising from a hate-filled gunman ought not to be a recommendation of more firearms amid a crowded congregation inside a place of worship?
Is it “too soon” to say that a lunatic regularly spouting hateful diatribes on public social media and threatening gun violence ought not to be in possession of an AR-15 assault rifle — and that any so-called ‘leader’ insisting that gun laws have “little to do with it” is being willfully ignorant or promoting/protecting gun manufacturers?
Bow our heads and mourn for the dead at Tree of Life. Then take a breath, wipe your tears, resolve to make a different reality, and VOTE!