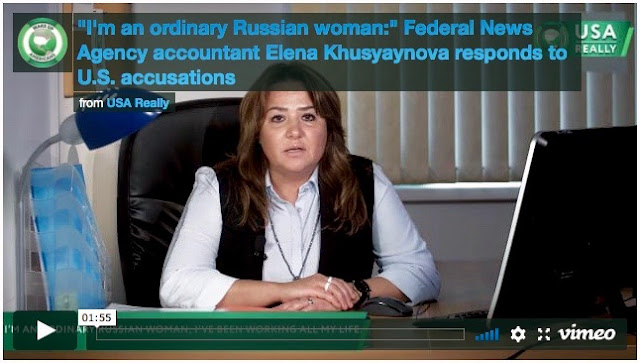 Federal prosecutors have bagged another witch in the Russia scandal witch hunt in charging Elena Alekseevna Khusyaynova with a twofer -- interfering not just in the 2016 presidential election as a player at a by-now infamous St. Petersburg troll farm, but also being a player in a similar influence campaign in the forthcoming midterm and 2020 presidential elections.

Does that make it a threefer?

Khusyaynova, 44, managed the finances of Project Lakhta, which prosecutors described in a criminal complaint as a foreign influence operation with close Kremlin ties but no particular ideological bent that puts forth extreme arguments and disinformation -- or dezinformatsiya in Russian, meaning the spread of information with the goal of deception -- in order "to sow discord in the U.S. political system" about a wide range of divisive political issues.  These include immigration, LGBT controversies, the Confederate flag, gun control and National Football League protests during the national anthem.

Overall, Russia scandal indictments, criminal charges and successful efforts to flip perps now number an impressive 37 witches, including six cooperating Donald Trump insiders who could make his life a bloody hell after the midterms, and some 27 Russian nationals.  All were brought down as the president and the Vichy Republicans in Congress have continued to pretend that Russian cybermeddling is a deep-state plot to undermine Trump's legitimacy.

Their outbursts echo what the trolls on Khusyaynova's team are themselves saying in a creepy reflection of how untethered the predatory Trump and his Republican Party have become from reality.

One troll termed Mueller "a puppet of the establishment" whose work is "damaging to the country," while another sought to incite violence in tweeting "If Trump fires Robert Mueller, we have to take to the streets in protest. Our democracy is at stake."  One Facebook page maintained by these trolls reached over 1.3 million people, while several of their Twitter accounts had tens of thousands of followers.

A warning: This post is seriously inside baseball and probably should be passed by if you are numb from the succession of breathless media stories about the scandal.  But if you are fascinated by the scandal, or alternately fascinated and horrified as is your Faithful Scribe, then these aspects of the Khusyaynova case, which was made public late Friday, are intriguing:


The timing of the complaint being made public was not a coincidence, coming a mere nine hours after the Office of the Director of National Intelligence issued a statement in conjunction with the FBI, Justice Department, and the Department of Homeland Security warning of ongoing campaigns by Russia, China and Iran to "influence vote perceptions and decision making in the 2018 and 2020 U.S. elections."

Khusyaynova is identified in the criminal complaint as having been the chief financial officer for Project Lakhta since about April 2014.  Lakhta was associated with the Internet Research Agency, a troll farm that worked assiduously and to great effect to influence the 2016 presidential election, and has more recently been involved in trying to influence the 2018 and 2020 elections.

Curiously, the legal action is not an indictment but rather a criminal complaint with an accompanying detail-rich affidavit.  To secure an indictment, prosecutors must present evidence that persuades a grand jury that there is probable cause to believe a defendant committed a crime.  But prosecutors can bypass the messiness of a grand jury with a criminal complaint that cites probable cause, which makes it easier to secure an arrest.

That raises the question of whether Khusyanynova may actually be in custody, perhaps in another country, or is cooperating.  Either way or neither way, the exquisite level of detail in the complaint indicates that investigators may have seized or been given a computer hard drive or obtained access to email accunts, but it is obvious the complaint is merely a warm-up act and that at least one more shoe is likely to drop.

That "shoe" is a renewed effort against oligarch Yevgeny Prigozhin, familiarly known as "Putin's chef" and whose companies funded the IRA troll farm.  Two of Prigozhin's companies -- Concord Management and Concord Catering -- were among the three indicted by Special Prosecutor Robert Mueller in February along with Prigozhin and 12 other Russian nationals.  Khusyanynova is said to have been involved with some 14 bank accounts through which Lakhta laundered money.

The complaint is another opportunity to take a whack at Prigozhin and his Concord companies.  They have been waging a legal counteroffensive against Mueller since February, arguing, as did Paul Manafort, that Mueller does not have the authority to be coming after them, as well as a technicality involving the Foreign Agents Registration Act.  The complaint is an effort to make the case against Prigozhin stronger by focusing more on money laundering.

The complaint delivers a blow to Prigozhin and the Concord companies by noting that even after they were indicted for spending lots of money to influence American politics and even after he hired lawyers fight Mueller, the companies continued to spend lots of money to influence American politics, while the day Prigozhin's lawyers were in court in July arguing on his behalf, Khusyanynova was laundering more money to pay for more trolling.

The complaint is another instance in which Mueller, whose plate is quite full, has offloaded a prosecution to others rather than keeping it in house, in this case the U.S attorney's office for the Eastern District of Virginia and the Justice Department's National Security Division, which also is handling the complaint against Russian spy Mariia Butina.  Meanwhile, the prosecution of Trump lawyer-fixer Michael Cohen is being handled by New York prosecutors.

Khusyaynova's response to the criminal complaint was itself an exercise in trolling. She expressed innocent surprise and expressed her wish for America to be made great again.

In case you're wondering, Lakhta is an area of St. Petersburg where Khusyaynova apparently lives and where the IRA was located.  Oh, and the Trump presidency is a troll's dream.

Click HERE for a comprehensive timeline of the Russia scandal
and related developments.
Posted by Shaun Mullen at 10:47 AM
Email ThisBlogThis!Share to TwitterShare to FacebookShare to Pinterest

Of course, all of this troll activity is being done at Putin's behest. So it reflects Putin's belief that Russia's interest is served by creating greater discord in American society. Thus it reflects something of zero-sum-game view of political well-being -- that a divided America somehow bolsters Russian strength. His view of politics brings to mind mercantilism in economics, the long-discredited view that in order for your country to prosper in international trade, you have to force your trading partners into accepting bad terms. Of course, Trump's lack of economic sophistication means he in fact embraces mercantilism. He and Putin are thus both stupidly short-sighted about the "wealth of nations" (to use Adam Smith's phrase), and by extension, the political and social well-being of nations, individually and collectively. Putin maintains a Cold War mentality, and Trump has a let's-screw-the-contractor mindset.

I haven't done it much in the past couple of months, but for a year or so before then I used to loved to check out the wild and wooly comments sections on Breitbart News. I would love to know how much Russian trolling goes on there; one of the major themes of Breitbart commenters is to accuse other commenters of being paid Soros trolls. And where exactly do you sign up to make some spare cash as a Soros troll?