Politix Update: On The Inevitable But Sadly Joyless Ascendency Of Hillary Clinton 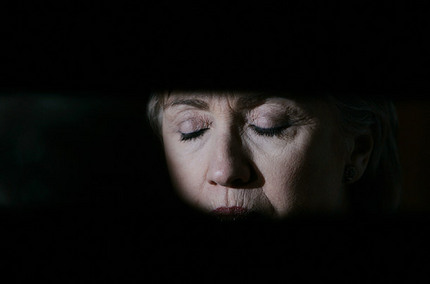 Hillary Rodham Clinton, daughter of our golden age and soulmate of the man who hastened the end of American idealism, will accept the presidential nomination of the Democratic Party of the United States tonight.   It is her second to last stepping stone in a decades-long odyssey of dedication, determination and sacrifice that despite the formidable odds she has faced will culminate in her election as the first woman president.

Clinton's acceptance speech will be stirring, the balloon drop spectacular, and the blare of vuvuzelas resounding, but what should be a moment of unadulterated joy will be a little sad and less than fulfilling for me -- and I suspect for others as well who share my fatigue.  This is because of the brutal beatings this intrinsically decent woman has sustained from an unrelenting right-wing noise machine, far too many otherwise good people who should have known better, and a feckless news media, all befitting the sorry state of politics and the omnipresence of the evil Donald Trump.

I am sad beyond description that Hillary Clinton's coronation will have been tinged with such darkness. After all, this also is a signal moment for women in America an extraordinarily long 96 years after they were given the right to vote, but that and other causes for celebration are being overshadowed by the latest ravings of a boy-man craving acceptance as he bottom crawls through the Republican fever swamp.

History will show that Barack Obama will have been among the greatest of presidents and was the right man for these troubled times.  The clarity with which he has seen the world was on offer in his stirring speech to the convention last night, and Clinton will pick up that theme in her acceptance speech tonight.

But Clinton's presidency cannot merely be a continuation of Obama's legacy.  A third term, as it were, although she will have twin shadows looking over her shoulder when she takes the oath of office next January: Bernie Sanders pushing from the left and Obama just pushing as she strives to try to govern on her own terms.  As Gary Legum well said in a Salon commentary, Clinton's ascendancy recalls the famous line about Ginger Rogers, who had to do everything Fred Astaire did, only backwards and in heels.

Could Sanders have beaten Trump?  How about Joe Biden?

Quite possibly, but we will owe Hillary Rodham Clinton an enormous debt of gratitude because she will dispatch a racist demagogue who in sanctioning violence, denigrating diversity and advocating treason, who in building walls, deporting millions and breaking international alliances, would snuff out decades of progress, threaten democracy as no other foreign foe has, all while bringing the America he claims to love to its collective knees.

Very well stated, Shaun. I am in total agreement with all your points and observations. Thank you. I wish your voice were louder and could carry further. I'm sure there are many other people who agree as well, but it's hard to be heard with all the shouting going on.

I hope you were able to watch and hear Hillary's address tonight which methinks was rather wonderful.

I agree with you as regards the performance and legacy of pres Obama. There comes a time when he will be sorely missed by many. However,what I'm talking about is the fact that the REAL powers that be are not the least bit sentimental and soon there will be an event that changes everything. People all over the world will stop in their tracks and say "What was that??"