The news that state-sponsored hackers backed by Russian President Vladimir Putin stole 20,000 email messages from the Democratic National Committee's email server and handed them off to the obliging Wikileaks organization burst onto the scene over the weekend and within a day had taken on epic proportions as it became clear that the cyber theft was merely the tip of a big and ugly iceberg -- the extensive financial and personal connections between Donald Trump and Russian interests that explained his fawning admiration for the ruler of the former Soviet Union.  But four days later, a story that might have changed the course of the presidential campaign seemed to have been played out, and the biggest reason was that Hillary Clinton, who would have benefitted the most from a scandal over the Russian government trying to sway the U.S. election by helping Trump, wanted it to go away.

Then Trump himself, in yet another extraordinary display of pathological recklessness, invited Russia to commit espionage by hacking Clinton's "missing" private email correspondence while she was secretary of state, elevating the fast fading story to a full-blown national security issue.  (The emails are not literally missing.  They were deemed "personal" by Clinton's staff and were not turned over to the State Department.  They apparently have been deleted.)

"Russia, if you're listening, I hope you're able to find the 30,000 emails that are missing," Trump declared at a bellicose press conference on Wednesday morning at one of his Florida resorts during which he shouted down reporters.  "I think you will probably be rewarded mightily by our press."

Raising anew fresh questions about his suitability as commander in chief in providing a textbook example of treason, Trump added that if Russia, or any other foreign government is behind the hacking, it simply shows how little respect other nations have for the Obama administration.  Love of country, you say?

"This has to be the first time that a major presidential candidate has actively encouraged a foreign power to conduct espionage against his political opponent," responded Jake Sullivan, Clinton's senior policy advisor.  "This has gone from being a matter of curiosity, and a matter of politics, to being a national security issue."

In a stinging rejoinder, the Republican nominee's comments drew a rebuke from House Speaker Paul Ryan, whose spokesman said in a statement that "Russia is a global menace led by a devious thug. Putin should stay out of this election."

Ryan has asked the Director of National Intelligence to deny Clinton classified intelligence briefings and is now in the awkward position of defending why Trump should not also be denied briefings, which he would receive as a matter of course as the Republican nominee.

Trump adamantly refused to answer repeated questions about his Russian business ties during his press conference, and afterward seemed to be attempting one of his patented walk backs following an especially outrageous statement. 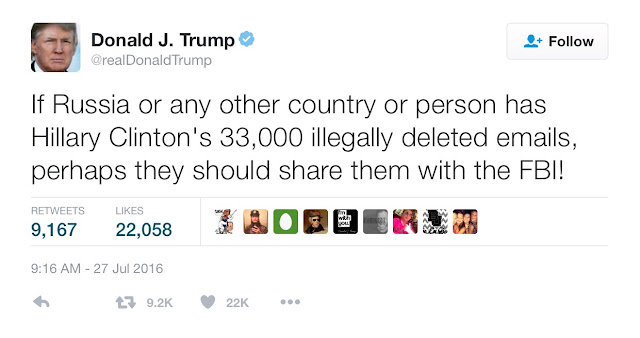 It is not difficult to see why Clinton had wanted the story to go away.

The Democratic nominee has become so paranoid about the stratospherically high negative ratings that have dogged her and made the presidential race much closer than it should be, preferred to throw over an anti-Trump story made in campaign heaven -- the weaponization of intelligence findings to influence the election to her great harm -- rather than endure further coverage.   That coverage would, of course, included mention of the contents of the juiciest of the leaked emails: Revelations that Democratic National Committee Chair Debbie Wasserman-Schultz was in the bag for her and DNC operatives had routinely disparaged Bernie Sanders.

Never mind that the revelations were not new and that Hillary and The Bern' have kissed and made up to the extent that he teared up Tuesday night on the Democratic National Convention convention floor in asking that her nomination be accepted by acclamation.  The hacking story threatened to detract from her coronation and a news media had dutifully played along.

This denouement is rather amazing when you consider what would have happened if Republican National Committee emails had been hacked by the Ruskies on the eve of the GOP convention and it turned out Clinton and Putin were buddying up.  The uproar would have been deafening.

I happen to like Clinton a whole lot despite her proclivity for making bad situations worse.  She will be a good president.  But there's some kind of twisted karmic connection at work here and it is really, really unfair: The vast majority of the negative feelings about Clinton are based on patently false information pedaled in the course of the enormously successful, decades-long right-wing smear campaign against her, and her unwillingness/inability to return fire.  (See the sidebar below for a smear-campaign evergreen: That as a young lawyer, Clinton was fired from the Senate Watergate Committee.)

"So what's going on? The evidence that Putin would like to install Donald Trump in the White House is pretty strong.  The evidence that Trump would pursue Russia-friendy policies in return is much more circumstantial, but still pretty substantial.  Manchurian candidate jokes aside, this is something that deserves a lot more coverage than whatever Trump happened to tweet last night."

This is what Trump tweeted: 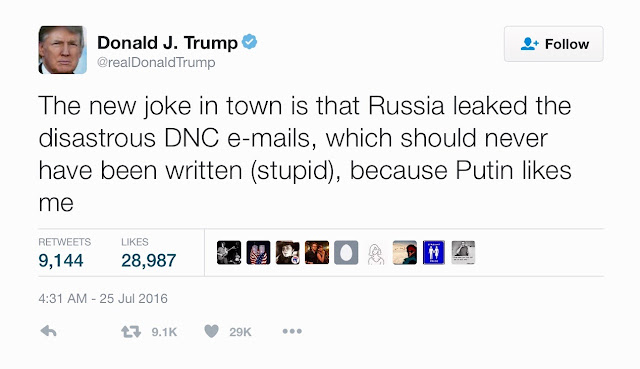 Even Weekly Standard editor William Kristol, the conservative maven who gifted us the Sarahcudda in 2008 and in doing so changed the direction of the Republican Party by greasing the skids for Trump, was unhappy that the Trump-Putin story appeared to have a short shelf life and said it cries out for further investigation:

"If Trump and [his campaign manager Paul] Manafort don't act to allay these concerns by releasing their tax returns (or in other ways), wouldn't it be advisable for a Republican member of Congress to lead an urgent investigation into whether Putin is interfering in the current American election?  Trump and Manafort may be Putin's chumps.  Will other Republicans sit by as the whole Republican Party becomes Putin's Party?"

We'll put aside the fact that Wikileaks, founded by the sainted Julian Assange, is doing the bidding of Moscow and Assange has said he engineered the leaks to try to harm Clinton.

What matters now and matters most is the possibility -- no, make that probability -- that the man who will say and do anything to defeat Clinton is doing the bidding of Moscow, intentionally or otherwise, a view that only a few days ago seemed bizarre but is now being taken seriously by the White House and FBI, and all the more so because of his own reckless statements.  And should be taken seriously by the short-attention-span news media.

"This is what happens when you nominate an egomaniacal bozo as your candidate for president of the United States," Murphy said. "He has jumped the shark into complete embarrassment. . . . He'll please his half of the Republican Party every day until the end, but that's not enough to win a general election."