After Dallas: 'This Is War. Watch Out Obama. Real America Is Coming After You.' 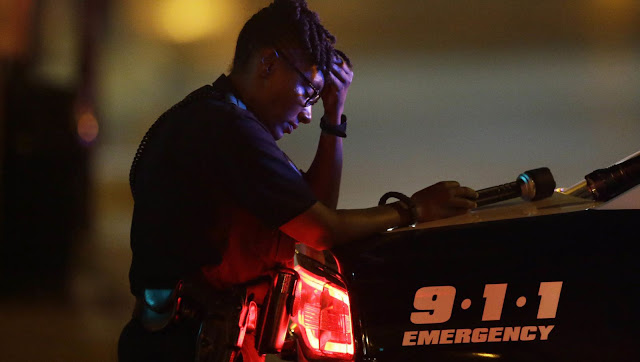 How fitting, in the grotesque sort of way that American society predictably moves from outrage to outrage and carnage to carnage through these lazy hazy summer days, that the sniper attack on Dallas police officers took place a short stroll from the most famous attack of them all.

Texas is indeed the epicenter of all that is wrong in these gun-sick United States, but what is more important at the moment is that the sniper attack on November 22, 1963 at Dealey Plaza that snuffed out the life of John Fitzgerald Kennedy and the sniper attack last night a mere 1,000 feet away at El Centro College that snuffed out the lives of five police officers were attacks on the established order.

Once the historic mists are parted and pet conspiracy theories put aside, and regardless of whether there was one sniper or two on that cold autumn day, the 35th president of the United States was silenced because he and his administration were a threat to the established order, most probably the epidemic of organized crime that had bestowed La Cosa Nostra and its ethnic brotherhood with the status of a powerful shadow government.  And it may turn out that while the sniper who dispatched five police officers on July 7, 2016 was a black who hated whites, and white cops in particular, he also was pushing back against the established order.

I don't really want to go here, but here I go:

Barack Obama has a little under 200 days to serve, and I won't begin to exhale until he is no longer our president, although he certainly will remain a Kenyan-born nigger and the Antichrist to far too many people.  You know what I'm talking about, America.

The usual batshit crazy spokesmen for our sickest were out of their caves and howling before the gun smoke had cleared in Dallas.  Tweeted Tea Party darling and former Congressman Joe Walsh:

This is war.  Watch out Obama.  Watch Out Black Lives Matter punks.  Real America is coming after you.

Most cops are good guys.  Most Americans mean well.  But black people are being killed by white cops at such a rate that most of these killings don't even make the national news anymore. (And if I may say so, black people don't need sympathy; they need respect.) Now police officers merely trying to make sure a peaceful protest over those killings stayed that way are being mowed down.

The hate abroad in the land is palpable.  The dialectic of violence and retaliation is appalling.  Our selective outrage is nauseating.  Mass shootings are occurring with such numbing frequency that they have begun to seem like so many ruffled feathers, and the carnage is the only relief we're getting from a presidential campaign between a racist and a woman who ignores the legal requirements of office because they're inconvenient.  Orlando?  Isn't that where Disney World is?

Then there are Walsh's pals, the sick Republican f*cks in the House who don't want to even minimally toughen gun laws to try to prevent terrorists from buying the killing machines that are easier to purchase than getting a driver's license, and the ever observant Dr. Ben Carson, who lit into Obama for "politicizing" the Dallas tragedy and helpfully reminded us that people need high-powered weapons not to hunt deer, but to be able to defend themselves from their government.

Are you surprised that the Dallas perp is black?

That the kind of befouled mental state we have come to associate with white Christianist nuts, Klans and militiamen doesn't respect racial boundaries in 2016 America?

That despite the yammerings of xenophobic right-wingers, we yet again have another instance of homegrown terrorism?

That the Dallas officers were shot in the back?  Videos show white, black and Hispanic cops using their bodies to protect innocents from the hail of gunfire.

Prayer helps.  Dialogue always is welcome, but talk is cheap.  Nor would a white Dr. Martin Luther King to whom racists and gun huggers might listen begin to turn the tide, as some thoughtful people have suggested.  God is going to let us work this out on our own.  That is if we don't kill each other first.   No, the short-term answer is tough, even draconian gun laws, a ban on all assault-style weapons and severe restrictions on all other weapons.  This, of course, is something that will never happen in a land where the National Rifle Association long ago replaced the mob as a powerful shadow government and could care less who the person pulling the trigger is, only that there are an ever growing number of triggers to pull.

For all the talk of ours being the greatest nation on earth, we're not even coming close anymore, folks.  As for being the sickest, we're there.

PHOTOGRAPH BY L.M. OTERO/THE ASSOCIATED PRESS
Posted by Shaun Mullen at 9:13 AM
Email ThisBlogThis!Share to TwitterShare to FacebookShare to Pinterest

Thanks for your Blog. Peace.

Great blog. I think you have voiced what 60% of the people in this country feel. The people got it wrong when they didn't elect Bernie the Democratic nominee.

Obviously this event is deeply troubling on many fronts. In race relations, hate begets hate. Violence in America is something that affects all of us, black, white, yellow or even chartreuse. Yet, like many problems this country faces, we refuse to face it realistically and try to come together for a solution.

The partisanship in America has hardened into separate pillars of steel. Each side maintains positions which are inelastic and designed to to emulate religious dogma. BLM participants and supporters, with whom I sympathize, have not narrowed their targets to the real problem – bad cops as opposed to all cops. In my anger at police, I have unfortunately been guilty of the same generalizations.

On the other hand, you have a bunch of people who defend cops at all costs. You have people like former Congressman Joe Walsh who blame Obama for Dallas and issued an angry tweet ” Watch out Obama, real America is coming after you”. Read some of the rightwing publications and the comment sections on the recent spate of killings. Far too many Republicans are not satisfied with disagreeing with Obama and Clinton’s policies, they HAVE to HATE those two people. On the Left, I do not see such vicious hatred for republicans but disagreement with policies they feel hurt people.

So here we are, in the midst of a political campaign that seems designed to drive us further apart. Obama has been poisoned by the lies and misinformation his haters have spread over the last 8 years. Even today, reading comments in articles people still spout he’s not only anti-American, but born in Kenya and a Muslim to boot. Clinton has been similarly poisoned and in no position to lead an effort to bring America together. I don’t see an inclination by Clinton to even try and G-d knows Trump isn’t inclined to do so.

Until a white Martin Luther King arrives on the scene, I don’t have much faith that America will heal its wounds of divisiveness any time soon. Until that day, people like Micah Johnson, an Afghanistan army veteran, will be the ones who are the leaders- may G-d have mercy on us.

This is the age of karmic catharsis. There will be an answer. Let it be.