A couple of days after the mudslide, we arrived in Cuzco — the gateway to Machu Picchu.

The city (elevation 11,152 feet) was the capital of the Incan Empire.  The architecture was monolithic, but has been built over in places and sometimes looted by the Spanish conquerers.  The Incan stonework is so tight that you can’t slip a credit card into it.  And all without mortar, just extraordinarily close-fitting boulders.  The Spanish had constructed their buildings over these huge stones.  Quite a dichotomy of stonework!

We found a very cheap ($6) room that we shared with a Colombian friend we had met while traveling.  We broke down the double mattresses beds and made four bunks, and tried to get some sleep since we had to be up early to catch the train to Machu Picchu.  The problem was the bedbugs.  We were bitten and scratched and scratched, and referring to them, I said to the Colombian, "Insectos!" No, he replied, "Animales."

After our fitful sleep, we made it to the railroad station and boarded a second-class train to begin the 150 kilometer, four-hour journey to the mountaintop citadel.

Traveling second class meant our train had to pull onto sidings to let first-class trains chug past, and we stopped at villages where permissios would hop aboard.  These large-hipped Indian women, usually accompanied by a small child or two papoosed to their backs, would be 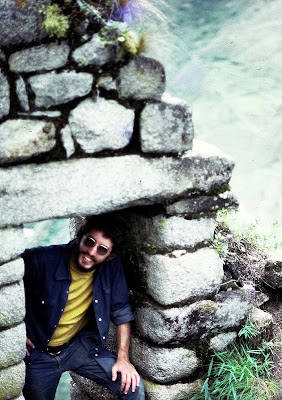 peddling local  foodstuffs.  "Permisio" is what they would say as they hip checked through a train car with the expertise of an NBA center, covering the entire train in the few minutes we were stopped.

The day was sunny and the air clean, so we preferred to stand with other backpackers on the platforms between the cars instead of sitting in the dingy cars.

I went into the rest car and sat down on the open toilet.  I looked up and noticed that the mirror and railing that ran the length of the car had small turds below them.  Then I understood.  These peasants had never seen "modern" bathrooms and they certainly weren’t going to poop in the well, like I was.  I went back and told my traveling companions, and they verified my analysis.

We arrived at the Machu Picchu station at Aguas Calientes (elevation 6,700 feet) early in the afternoon.

We had been forewarned by other travelers to hurry to the quonset hut shelter nearby and claim either a stick rack or hammock so we wouldn’t have to sleep on the wet floor.  (It was rainy season, remember?)  Well, I was ready.  My dad had worked on trains all his life and I sometimes traveled with him, so I had a leg up on these poor, backward people.

The train was slowing as it rolled into the station and I was poised between cars at the steps.  Not waiting for the train to come to a complete stop, I jumped onto the cobblestoned street, my 100-pound pack on my back, and my forward momentum and high center of gravity flipped me.  I body slammed into the cobblestones!

As I laid dazed — the wind knocked out of me — I looked up and these poor, backward people were all pointing at me.  I laughed at the foolishness of my dismount, as well.

I picked myself up and hastened to the hut where I grabbed a bunk and started making our "bean soupa."  No mean feat because at that altitude it took a long time  to boil water.  Eventually it simmered and we shared our repast with our traveling friends.  Without insectos to bother us, we fell asleep that night to hauntingly beautiful music — Crosby, Stills and Nash and the Beatles — sung and played by some fellow travelers, Brazilians perhap, that evoked melancholy thoughts of home. 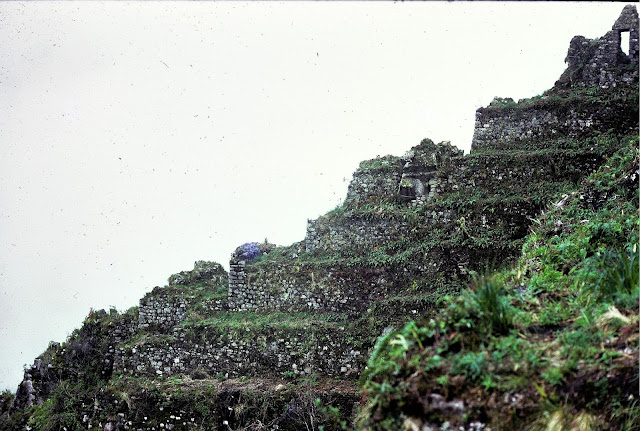 We were up early and began our ascent of Machu Picchu, which is at 8,920 feet.  Because of the altitude, we couldn’t handle the straight-up climb from the base camp taken by the natives who worked at Machu Picchu, so we took the circuitous, serpentine, switchback road, which took a couple of hours longer.

Well worth it, though.  This amazing city on top of the mountain was built in 1450 or so as an estate for an Incan emperor and was abandoned in the 17th century for fear the Spanish conquerors would find it, which they never did.  It was "discovered" by American explorer Hiram Bingham in 1911.

Machu Picchu is roughly divided into an urban sector and an agricultural sector with terraced fields.  There was an upper town with temples, including the Temple of the Sun, and homes for the emperor and upper-class people and a lower town for lower-class people.  There are about 200 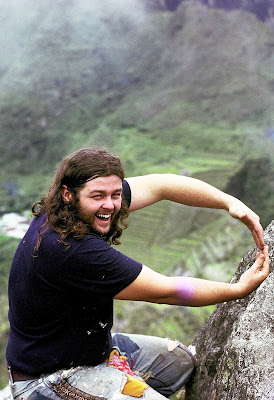 buildings, many of them restored, on wide parallel terraces around a central square.  Sophisticated channeling systems provided irrigation for the fields, while stone stairways set in the walls allowed access to the different levels.

The stonework and courtyards were phenomenal, but that wasn’t enough for the Tres Amigos and we decided to scale Huanya Picchu (elevation 9,843 feet), which looks down on Machu Picchu and was where the Incan priests had lived.  The structures there are even more massive.

This was an ordeal.  Rough hewn cutback stone steps were the only way up.  Granted that we were young (mid-20s), but we were sea level boys and that altitude is hard to adjust to.  But the resulting view was breathtaking and the feeling transcendent.  I suppose the combination of altitude, exhaustion and lack of proper diet had us in a metaphysical state.  Definitely the most amazing place I’ve ever seen!

After descending Huanya Picchu (photo, lower right), which was definitely easier and faster than climbing, we began the northern leg of our journey, which was down the eastern slope of the Andes toward southern Peru and by bus and train.  At one of the many towns we went through, I made the cardinal mistake of eating the local fruit, which had the same effect as drinking the water, and Montezuma’s Revenge ensued.

I needn't tell anyone who has had Montezuma’s Revenge, but this involved severe diarrhea and/or vomiting.  I had the worst-case scenario.  Both ends!  It really hit me when I was on a crowded train on the highest rail line in the world.  I was climbing over people to get to the bathroom, and they were nearly as uncomfortable as I was. I felt -- and looked -- like death warmed over.

Nothing was open, we couldn’t find a place to sleep, and I was week from three days of sickness.  I was carrying that 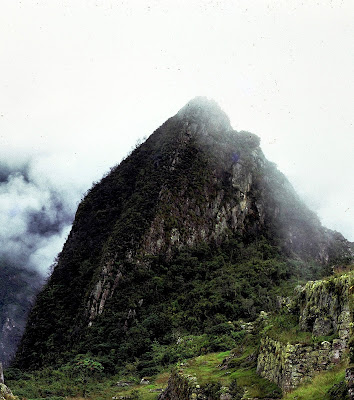 100-pound backpack and finally said, "I’m sleeping here," which happened to be the carport of a car dealer.  We got a few hours of sleep before someone showed up for work and chased us away.

It was at this point that Simon decided to return to Lima and meet us there for the trip back to the States.  Mac and I wanted to see the Plains of Nazca and the famous prehistoric lines on the way back up western Peru to Lima.  The trouble was that the Atacambe Desert stood in our way — the driest place on earth.  Even drier than the Sahara with temperatures well over 100 degrees F.

We talked our bus driver into letting us off at Nazca.  Very interesting place, but hard to appreciate at ground level.  Lots of straight and curved lines running for miles.  After exploring the city, we found a family who let us sleep on their porch and gave us a drink of water.  We left early in the morning, and since we were near the end of our trip, we left behind our trenching tools and other unneeded items.  I wonder if they remember our visit?

Mac and I set out hitchhiking on the Pan America Highway.  We were lucky enough to get a ride in the back of an old stake-bodied truck that let us off about three miles from Ica (elevation a mere 1,332 feet), where we were to catch another bus.  It was the middle of the day and our backpacks were still full enough to make the hike into Ica foolhardy.  We paused at the only grove of trees for miles around and started hitchhiking again.  Not much traffic and not much luck.

We spent about three hours under a tree where I carved "Beet Was Here" with my penknife.  Mac finally couldn't take it anymore and insisted we keep hitchhiking.  It was well over 100 degrees and I tried to reason with him to wait until the sun started to go down (in only about two more hours), but he wouldn't listen.  Mac never listened.  He could be a stubborn ass.

Mac threw his backpack on and started to walk to Ica.  We had already been separated twice before by his obstinance, and suddenly I couldn’t take it anymore!  I threw on my backpack and raced Mac to Ica, telling him along the way what I thought of him, his ancestors and his obstinance.  I had finally dissipated my anger by the time we slogged into Ica, but I still get upset thinking about it today.  Stupid that something would still bother me that much 43 years later.

After catching the bus at Ica, Mac and I had an uneasy truce.  We arrived in Lima and met Simon at the Plaza des Armes.  We got a comfortable room for the night and looked forward to our return to the good old U.S. of A.

We had a good time traveling, saw some amazing things and met some nice people.  But home is home and the U.S. is ours.

When we reached Miami, Simon had to fly back to Newark to work while Mac and I met some friends in the Florida Keys and awaited the arrival of Catbird, Dr. Duck and the old Chevy wagon for the trip north.  The gas cans were still on the roof, and thinking back on it, I can't believe we weren't hassled by the police because of the obvious safety concerns.

Looking back on our trip, I recommend traveling while you're young enough to do it.  Don't wait until your old and it seems too daunting.  And definitely visit Machu Picchu and Huanya Picchu, the neatest place I've ever been. 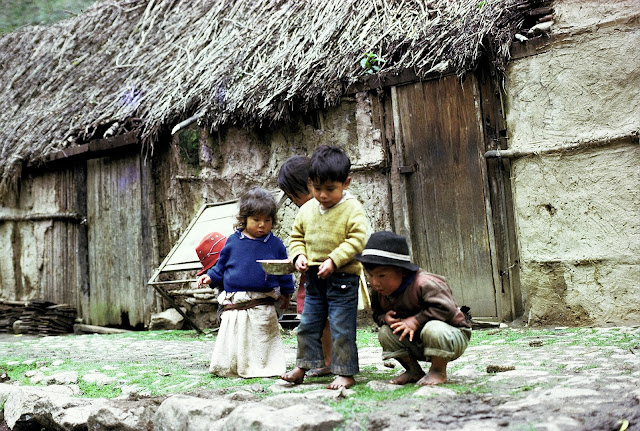 Mac the breeze in the wind said...

Remembered a slightly different version.once back in the USA,i hitched down to the keys alone

Mac the breeze in the wind said...

Remembered a slightly different version.once back in the USA,i hitched down to the keys alone