There Is A God: Run, Rudy, Run! And Other Tales From The GOP Crypt 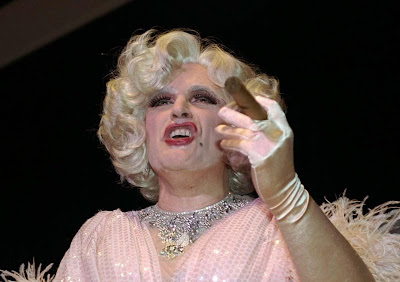 In yet another sign of the weakness of the field of Republican presidential wannabes, America's Mayor is making noises that he might throw his hat in the ring and Bill Kristol, whose almost unblemished record of getting stuff wrong as the doyen of what remains of the neocon movement, is all warm between the legs in a way he hasn't been since he first was smitten with Sarah Palin.

Three years on even Kristol knows that Palin couldn't be elected dogcatcher of Wasilla, but Rudy Giuliani isn't far behind even with the resignation of Newt Gingrich’s top advisers, scuttling a campaign that was a joke from the jump.

Rudy's message, according to Kristol, is that he's a tough guy who will put America's fiscal house in order while protecting us from enemies abroad. You know, E. coli viruses, knockoffs of designer handbags and such.

Republicans with short memories won't recall that Rudy parlayed some stand-up moments as New York City mayor in the wake of the 9/11 attacks into a bid for the Republican presidential nomination in 2008 that took him from frontrunner status to a crash-and-burn also-ran. The collapse seemed stunning at the time, but in retrospect was for the simple reason that voters figured out he was a portfolio without a man.

As it turned out, Rudy's 9/11 halo was considerably tarnished because his administration had failed to address flaws in the response to the first World Trade Center bombing in 1993, and then he sent clean-up workers into harm's way after the Trade Center towers fell knowing full well that the site was a toxic hell.

A died-in-the wool New Yawk liberal, Rudy fooled no one on the campaign trail in tacking hard to the right. This included throwing over his many gay friends and pushing a foreign policy platform that made John McCain seem like Mother Teresa.

Then there was all the crap and corruption, which tended to tarnish his family-values cred. This included adultery, misuse of city police officers and misuse of city funds. Oh, and hiring a disgraced priest accused of sexual molestation to work for his consulting firm. So scummy is Rudy that not even his children from his first marriage would endorse his presidential run.

Then there is Bernie Kerik, who ran New York's Department of Corrections and then was promoted to police commissioner by Rudy, who later recommended him to the Bush administration as the first homeland security czar although America's Mayor was well aware of Bernie's multiple legal entanglements, links to organized crime and other shady dealings.

These included $165,000 in free renovations to his Bronx apartment by a construction company with mob ties, shacking up with his mistress in a Manhattan condominium reserved for police officers with post-9/11 traumas, and that timeless toe stubber: failing to pay taxes on an illegal immigrant he had hired as his nanny, whom he also was boinking on the side.

The White House didn't bother to vet Bernie's nomination because George Bush wanted him, but soon had to drop him like a hot potato when a stream of seamy revelations made it into print.

No word on whether Bernie will be endorsing Rudy, but he won't be campaigning for him. Unless it is among the inmates of the federal penitentiary where he is serving a four-year sentence for conspiracy, fraud and a bunch of other crimes.

Props to Mitt Romney for breaking with the pack of GOP presidential wannabes and acknowledging that there is a human component to global warming. But the sound you hear here is one hand clapping because the Mittster doesn’t have a plan for dealing with it.

And from Rush Limbaugh, the party's de facto head: "Bye-bye, nomination. Another one down. We’re in the midst here of discovering that this is all a hoax. The last year has established that the whole premise of man-made global warming is a hoax, and we still have presidential candidates that want to buy into it."

Tim Pawlenty, desperate to be taken seriously, laid out a blueprint for economy recovery this week..

The plan promises 5 percent growth over 10 years, a rate that could not be sustained more than four years during the Reagan and Clinton administrations, further tax breaks and assorted other hugs for corporations, and a deficit reduction goal that could not be met even by eliminating all non-defense discretionary spending.

Yes, Pawlenty wants to be taken seriously — not by voters in general but the right wingnuts who he needs to punch his ticket.

A THOUGHT FOR OUR TIMES

"What he doesn't understand is that Palin's nutsiness is not a partisan matter in Britain, or anywhere else in the world. It is an obvious truth marveled at by all. Palin's emergence as a serious figure in American politics has made the country a laughing stock across the world. The idea that a stateswoman like [Margaret] Thatcher, in advanced dementia, would be used by such a crackpot is simply unseemly."