Chris Christie Wants It Both Ways 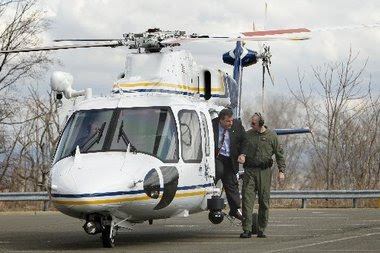 Despite the high marks he gets from Republicans nationally because of his apparent fiscal prudence, Chris Christie is on track to be yet another one-term New Jersey governor.

His reputation for profligate spending as a U.S. attorney has carried over to the governor's mansion, and as if to emphasize his selfishness at a time when the Garden State is in fiscal crisis, he arrived at his son's baseball game on Tuesday afternoon aboard a spanking new $12.5 million State Police helicopter, which landed in an adjacent football field. Christie disembarked from the helicopter and got into a black car with tinted windows and was driven about 100 yards to be baseball field.

Such ostentation also was the norm at University of Delaware football games last season. Both Christie and Vice President Biden are graduates, but while Biden shows up in a single SUV with two or three Secret Service agents, Christie has a four-vehicle motorcade with motorcycle escorts.

A spokesman for the governor said use of the helicopter was necessary because of his busy schedule, but that schedule showed only a single meeting for Tuesday -- a sitdown with a group of Iowa donors who want him to run for president in 2012.

That is probably a non-starter. Besides which, the media scrutiny would undermine any campaign the notoriously short-tempered Christie would mount.

Christie has proved to be adept at talking out of both sides of his mouth.

The New Jersey Supreme Court ruled late last month that the state must provide $500 million in additional funding to its 31 poorest urban school districts, all of which had seen their budgets slashed under a Christie austerity plan.

Meanwhile, the state lost federal matching funds for family planning because of a Christie veto, a precious $400 million was lost because of a bungled application for Race to the Top education money, $60 million to weatherize homes evaporated, and the state has had to return $271 million to the feds because Christie cancelled of New Jersey's share in funding a Hudson River rail tunnel project.

Photo by Aristide Economopoulus/(Newark, N.J.) Star-Ledger
Posted by Shaun Mullen at 12:10 AM
Email ThisBlogThis!Share to TwitterShare to FacebookShare to Pinterest

It's constantly amazing that Republicans seem to think this bloated loose cannon is some sort of secret weapon or ace in the hole who would somehow prove more appealing than the pack of misanthropes and nutjobs they've already got running for President. This helicopter stunt shows he's as arrogant and obliviously self-absorbed as any of them.

I do give him credit for not being a global-warming denialist, but the very fact that that's so unusual shows how far they've sunk.