Remembering Tom: 'We're All Brothers & Sisters On the Surface of the Planet Earth' 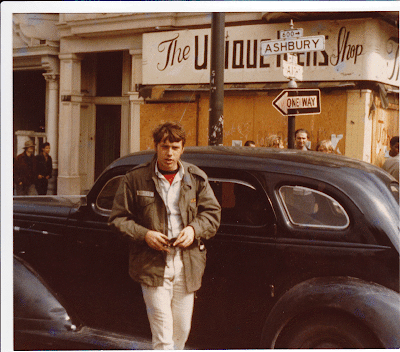 Tom and his beloved LaSalle in San Francisco (1969)
(ORIGINALLY PUBLISHED IN JUNE 2007)
Tom was my oldest friend and probably my closest. I met him when I was a freshman in college and for the next 30-plus years had some great adventures with him, all the while soaking up his down-to-earth wisdom like a big sponge.

There were trips to what we called The Magic Gardens, a replica of a Roman ruins in a great garden behind an estate that could only be trespassed by river and most easily when the moon was full.

Our expeditions, which included anywhere from one to five or six canoes, would put in at the foot of the gardens after . For the next several hours, we would cavort among the ruins, sometimes playing hide and seek with the slow-witted security guards, and then paddle back upriver as dawn broke.

There was a trip to what we called , a mangrove lagoon off the beaten track on Sugarloaf Key in the .

We camped among the air plants and huge and creepy mangrove spiders in a glade hard by the lagoon that teemed with barracuda, octopus and tetras. Tom, a master of many trades, taped into a water main that ran next to the road and ran a series of garden hoses to our campsite so we had running water for cooking and showers.

Then there were our efforts to spot a celestial bust known as Comet Kohoutek, which was supposed to blaze through the southern sky in the winter of 1973-74.

We lugged two big telescopes through a trap door and onto the roof of a farmhouse out in the country and far from ground light in an unsuccessful night-after-night attempt to see the comet. No go, although we later saw Kohoutek from our vantage point in the Keys -- disappointingly, a mere pinprick of light with a hair-thin tail.

There was the morning after one Halloween when Tom knocked at my door. Dressed in a silver lame body suit, his head and hands spray painted the same color, he had left a country road in his Morris Minor at a high rate of speed and in an advanced state of inebriation after a costume party and had rolled the tiny car down a hill and into a cow pasture.

Having scrambled up the embankment and back onto the road, Tom hitched a ride to my house and was in desperate need of a hot soak in my bathtub. I never was able to completely scrub out the silver ring that he left behind.

One summer afternoon I set out southbound from the farmhouse in my VW bus. About a half mile away came Tom in The Pig, a Buick Special that he had customized with a hopped-up engine and a pair of aircraft landing lights bolted to the front bumper. The were no other cars on the road.

We sped closer to each other and then in a feat of mind-reading legerdemain, Tom veered into my lane and I into his as we shot past each other.

But most of my adventures with Tom were at his workshop or across the railroad tracks at the local townie bar.

Tom’s shop looked like the set of Sanford and Son, only more junk filled.

Sorry, it wasn’t really junk. Everything had a purpose, from the industrial-grade sewing machine to the slabs of milled black walnut aging in a corner to the occasional homeless person whom Tom would allow to sleep under a work bench on cold winter nights.

Like I said, Tom was a master of many trades: Working on cars. Carpentry. Electrical work. Tree trimming. Sign painting. Stargazing. Sexing marijuana plants. Crafting beautiful things out of leather, including belts, holsters and bandoliers for the local police department.

I asked him to make a leather vest for my girlfriend one Christmas and he produced a satin-lined beauty that fit her perfectly although he had never taken her measurements. He used only the finest English foundry brass for his belt buckles, one of which I still wear three decades on.

Tom held court in a corner of the townie bar, dispensing four-leaf clover key chains and wisdom to regulars and irregulars alike as he sipped on Rolling Rock beer.

We’re all brothers and sisters on the surface of the planet earth.

Don’t get a tattoo. It’s bad to poke holes in your spacesuit.

There’s no such thing as a longest and shortest day of the year. They’re all 24 hours.

Since Tom’s liver finally packed in 13 years ago this week, I've often wondered when he went around the bend. But it was such a gradual thing that it's impossible to say.

Perhaps when his usual repast of two slices of toast, two strips of bacon and a cup of hot tea at a greasy spoon was replaced with a Rolling Rock breakfast.

Perhaps when he stopped doing leather work and started washing the floor mats at the townie bar for free beer.

Perhaps when he stopped washing his beautiful waist-length hair with any regularity.

Perhaps when he would avert my gaze instead of trying to argue with me that he was okay when I got on his case about letting himself go.

But come to think of it, it probably was when he stopped following his own advice.

I'm sorry for your Tom's passing, Shaun. I'm sorry he couldnt have stayed longer with you all, he sounds like a one of a kind wondrous soul, and you did a your classy craftsman job of giving him a praise-reflection of his life that's honorable and real at the same time. May he rest in peace now. May your heart be at peace too, Shaun. I hate losing our life-witnesses.

It's a lucky man who has one friend in his lifetime like yours.

Luckily, the T-Man had scores of friends like Shaun. Just not so many who can write like Shaun!!

Friends like Tom are rare and wonderful. I'm glad you got to have him in your life. Sorry to hear that you lost him. This is a hard point to be in life when we age to the place where we start to lose friends. I have lost one a year for the past 2 years and hope 2011 will pass with no losses.

Wonderful obit for your friend.

Reflecting on your thoughts, it is all too often that the phone rings and it's a friend who I have not heard from for a while. With news that a friend has passed.

Nicely written. It's a lucky man who has one friend in his lifetime like yours. Friends like Tom are rare and wonderful. I'm glad you got to have him in your life. Thanks for sharing this post so much.
agenzie hostess