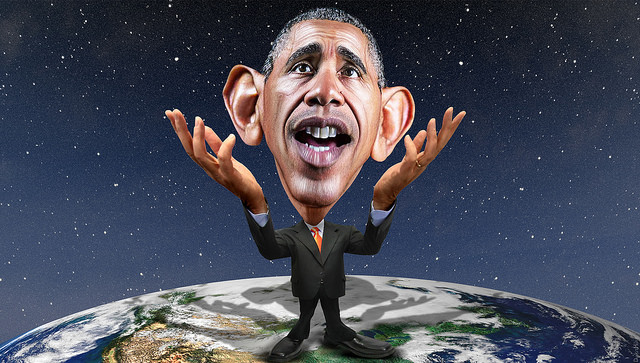 The San Bernardino massacre has brought out the best and worst in American politics.  Unfortunately, there has been little to praise and much to condemn.

On the positive side, Barack Obama's speech from the Oval Office on Sunday night hit all the right notes, but as I wrote the next morning, it had a hollow ring even if offering the appropriate prescription of unity, patience and tolerance.  The president correctly characterized Islamic terrorism as an "evolving threat" that has taken a new shape via the Internet through which extremists can incite terror attacks inside the U.S. without the foreign training and travel that makes such conspiracies easier to detect and thwart.

The U.S. will defeat the Islamic State "by being strong and smart, resilient and relentless, and by drawing upon every aspect of American power," Obama said, while emphasizing that success "won't depend on tough talk, or abandoning our values, or giving into fear."

* Obama may have been elected by a war-weary nation, but many Americans -- and certainly the Republican opposition -- are now demanding action, if not yet another war.  His cautiously incremental policy combining an ongoing bombing campaign with shot-in-the-dark diplomacy did not exactly resonate as a call to arms.

* Hate speech is wrong, but clear speech is necessary.  Obama's euphemistically antiseptic descriptions of of the jihadist threat, such as characterizing one of the San Bernardino shooters as a man carrying a card identifying himself as "a soldier of Allah," have taken political correctness too far.

What was perhaps the most important moment in a speech regrettably short on passion was largely overlooked: The president's call for American Muslims to confront terror as "a real problem, without excuse."

Yes, U.S. policies in the Middle East have fueled jihadist fervor, but this is not the time to remind Americans of that inconvenient truth as did Hussam Ayloush, a spokesman for the Council on American-Islamic Relations, who told CNN: "Let's not forget that some of our own foreign policy, as Americans, as the West, has fueled that extremism."

On the negative side, Democratic presidential frontrunner Hillary Clinton's suggestion that Facebook, YouTube and Twitter should "disrupt"  ISIS by taking down its content, making it harder for the group to recruit fighters and communicate online, was both silly and stupid.

Private companies should not be in the business of deciding what online speech should be censored, and even if these big Internet companies were successful, ISIS would quickly find other ways to communicate.

But more importantly -- much, much more importantly -- faced with the gravest domestic crisis since the Republican president campaign got underway, GOP candidates across the board failed to show that they were capable of leading, let alone doing better than Obama. 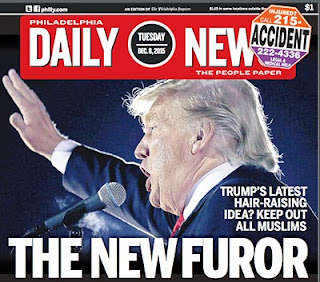 Deeply bigoted frontrunner Donald Trump, of course, led the charge of this lightweight brigade in demanding that all Muslims be barred from entering the U.S.  As usual, he diddled the truth.

Trump cited FDR's classification of thousands of Japanese, Germans and Italians living in the U.S. during the war as "enemy aliens" in rationalizing his draconian plan while failing to note that the U.S. was at war against those countries, but is not at war against Islam, only Islamic terrorists.  And his subsidiary claim that there are parts of Paris where police are unwilling to go because of terrorists has no basis in fact.

He was condemned by most of the rest of the field of poseurs, which had the effect of overshadowing their own unhelpfully feckless responses, which to a person were long on rhetoric and short on everything else.

Ted Cruz, trying to out-macho Trump, said he'd direct the Pentagon "to destroy ISIS . . . We will carpet bomb them into oblivion," adding "I don't know if sand can glow in the dark, but we're going to find out."

Jeb Bush, who advocates banning Muslim war refugees but allowing in Christians, overlooked a thousand years of history and a fundamentalist lunatic fringe that shoots up Planned Parenthood clinics in claiming that "The idea that somehow there are radical elements in every religion is ridiculous."

Marco Rubio helpfully remind us that we should be "really scared and worried," not just because of those shadows in the dark, but because "we have a president that's completely overwhelmed" by ISIS.

And John Kasich outvagued his opponents, declaring "When terrorists threaten us . . .  We need to decisively and aggressively protect our nation and our ideals. We can't delay."

Islamic terrorists still kill many fewer Americans than right-wing and Christian terrorists, but that of course is not being addressed, while the Republican Party's strategy of lying, obfuscating, fear mongering and just saying no while openly embracing nativists and racists keeps coming back to bite it in the collective ass.

This helps explain why a man with a lynch mob mentality, not someone actually qualified to be president is running away from the field, and a creep like Rubio is actually being called a "sane" alternative to Trump.  Is Trump's blanket slander of Muslims the last straw for righteous Republicans?  Of course not.  The party has a hayloft crammed with last straws, and its identity crisis will continue to drag it down and down.  And down.  Is Trump a fascist?  Of course he is.

Has there ever been an instance of a political party being held captive by its most rabid supporters?

It's been seven years since Republicans opted out of the national conversation by working to undermine Obama however, whenever and wherever, and now they can't be a part of that conversation in a time of crisis because they would appear to be capitulating to the commander in chief.  How pathetic they are, in effect siding with the terrorists by being part of the problem and not working for solutions, as elusive as they may be.


Politix Update is written by veteran journalist Shaun Mullen, for whom the 2016 presidential campaign is his 12th since 1968.  Click HERE for an index of previous columns.  © 2015 Shaun Mullen.

IMAGE FROM DONKEYHOTEY/FLICKR.
USED WITH PERMISSION.
Posted by Shaun Mullen at 12:02 AM
Email ThisBlogThis!Share to TwitterShare to FacebookShare to Pinterest