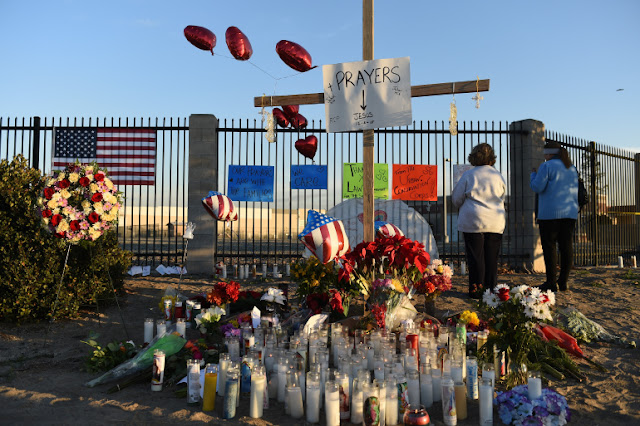 My first reaction when I saw a news flash on the San Bernardino massacre was "Oh my God, it happened again."

My second reaction was "Oh my God, not that" when it was revealed that the assailants may be jihadists.

My third reaction -- and the subject of this column -- was "Oh my God, this is really going to be bad" for Hillary Clinton and Democrats who don't believe the latest mass shooting -- and they're occurring at a horrific rate -- should result in making it even easier for people to buy weapons whose sole purpose is to kill and maim.

That, of course, is the one-size-fits-all default position of the demagogic Donald Trump and the other Republican presidential candidates who draw on a shameful history of advocating macho vigilantism over making us all safer regardless of who the assailants are: A psychopath who taps into his mother's arsenal to shoot up an elementary school in Connecticut, a loser with a history of violence who lays waste to a Planned Parenthood Clinic in Colorado, or a Pakistani-American and his Pakistani wife who unleash their own jihadist carnage.

On more sober reflection, I'm proud that Clinton and many Democrats are sticking to their . . . you know whats.  I'm proud that they refuse to capitulate to the mindless screaming mimis dancing around the National Rifle Association-greased Republican totem poll with their torches and pitchforks.

The profound perversity of our violence glamorizing and gun-sick culture, as well as the way gun manufacturers, dealers and the NRA have played politicians and the system for immense, blood-soaked profits becomes ragingly obvious when viewed from an historic perspective.

Yes, the Second Amendment is peculiarly worded.  But there can be no question whatsoever that when the Founding Fathers wrote

"A well regulated Militia, being necessary to the security of a free State, the right of the people to keep and bear Arms, shall not be infringed,"

they did so in the context of a young republic that was still recovering from the aftershocks of the Revolutionary War, had no standing army and relied on citizens to grab their trusty flintlocks from over their fireplaces and muster in the town square if there was a threat to civil order, whether from Indians, rum runners or the British.

People have been interpreting the Constitution to their own political and ideological benefit in the intervening 232 years.  But there also was no question whatsoever that the Founders could not have anticipated and would be horrified that the day would come when there would be 300 million guns carried concealed in shoulder holsters and belts, stowed in car trunks, arrayed on pickup truck rifle racks, and displayed in cabinets and over fireplaces, in a long mature republic that allows  -- and a sick subculture that encourages -- the purchase, possession and carrying of unlimited numbers of those weapons whose sole purpose is to kill and maim.

The last time The New York Times ran a front-page editorial was in 1920 when it decried the Republican Party for nominating Warren G. Harding for president.  Harding went on to win, and while "The Gun Epidemic" editorial is a powerful example of the genre (I wrote a slew of editorials myself and this one was really good), it will convert very few people and further polarize the debate, such as it is, in calling out politicians for their cowardice and advocating the elimination of large categories of weapons and ammo.

The story to the right of the editorial in the print edition was headlined "Shootings in California Reshape the Campaigns," and noted that the Republican candidates, using apocalyptic terms and with a unanimity previously absent in the race, accused President Obama and his fellow Democrats of failing to mount an assault on the Islamic State.

And so we have yet another self-serving rationalization for ducking the gun issue with a call for a Third World War that ignores a huge reality: ISIS is not a conventional enemy any more than Al Qaida and the Taliban have been.  It would take hundreds of thousands of America troops to make a mere dent in global terrorism.  The Iraq war would seem like a picnic in comparison.  The economy would collapse.  And America would become even less safe, which is a poorly understood consequence of Dubya's Mess in Mesopotamia, which was a crucible for the spread of ISIS.

"Our nation is under siege," declared Chris Christie at a cafe in rural Iowa, his moribund presidential campaign suddenly revitalized as he plunges into the deep end of the I'm Pro Life and I'm Pro Gun conundrum.

Across the state, Clinton spoke not of world war but of the need to ferret out "those folks who are on the Internet radicalizing people" through a more realistic military campaign in the Middle East like that of the U.S. and its allies, while curbing the ready supply of guns at home.

"Part of that strategy, I'm just going to say this," Clinton added, "is to try to prevent terrorists from getting their hands on guns in our country."

David Gergen, an adviser to four presidents, calls the San Bernardino attacks a signal event in the campaign, and correctly notes that it will be widely misinterpreted as a win-win for Republicans.

The reality is that frontrunning Donald Trump, who is so popular precisely because he has no national security experience, or public-service experience of any kind, will benefit most from a nation Republicans are gleefully characterizing as being gripped by a siege mentality.  Meanwhile, Christie and other also-rans will have flash-in-the-pan moments of success as they try to out-tough each other, but at the end of the day -- or rather the election cycle -- Clinton will win in a walk because there still are plenty of Americans who know which side to take in the battle between preserving our values and delusional warmongering layered with Islamophobia thinly disguised as political correctness.

But will a Clinton victory and her more measured response to terrorism and the necessity for gun control with teeth make a difference at a time when Americans are soiling their pants and Republicans claim they're the only people who can properly wipe their backsides?

No.  Because Republicans will simply do what they did in the wake of Mitt Romney's crushing 2012 defeat. Lick their wounds, concede the party has to be more welcoming, less racist and more in tune with the electoral mainstream, and then revert to the same revanchist impulses all over again.  Like voting down legislation that forbids you from flying if you're on a watch list but allows you to buy guns..

Will another spate of mass murders make a difference?

No. Because if the wholesale slaughter of 20 elementary school students and six of their teachers at Sandy Hook didn't move people to re-examine the assumptions underlying easy access to weapons like the Bushmaster XM15-E2S rifle Adam Lanza stole from his mother's home, then another few dozen or few hundred innocents slaughtered won't matter.  It's just another day in America.

Focusing on the crux of the crisis -- the gun industry.  This means comprehensive government oversight, including substantially higher taxes to help pay for the public health epidemic that mass shootings have provoked, and harsh civil and criminal penalties for the manufacturer and seller of any gun used in a mass shooting or terrorist act at home or abroad.  The bleeding will not begin to be stanched without these steps.  The war on terror won't be worth the powder to blow it up with without these steps.

We face something like a a Chinese finger puzzle, notes Josh Marshall: "The things we do to arrest the problem draw us deeper into it, paradoxically deepen the threats facing us. The conundrum requires a mix of force and restraint, vigilance and pluralism. It is genuinely complicated and a balance our politics -- any democratic society's politics -- is challenged to summon."

Barack Obama's plea last night in a rare Oval Office speech that Americans remain united and not give in to fear had an undeniably hollow ring, but it is the right prescription.  "We cannot turn against one another by letting this fight be defined as a war between America and Islam," he said in explaining his administration's incremental approach to containing ISIS while trying defuse the civil war in Syria in the service of focusing on a common enemy.  Republicans predictably responded that the president was misguided in focusing on gun control and "weak" when it came to confronting terrorism.

Clinton and like-thinking Democrats may suffer a ding or two, but like the president their refusal to capitulate to the lock-and-loaders, as well as politicians whose jobs depend on appeasing the NRA and its gun-nut members, shows true leadership and a decency conspicuously absent in an immensely powerful tail-wags-dog subculture that would rather continue to abet mass killers through a flourishing multi-billion dollar gun market than take steps to make us all safer against all comers.

Politix Update is written by veteran journalist Shaun Mullen, for whom the 2016 presidential campaign is his 12th since 1968.  Click HERE for an index of previous columns.  © 2015 Shaun Mullen.

In talking about the issue, some of us are talking about murder and violence while the NRA just likes to talk about guns. they have been extraordinarily effective at making the debate about guns. I foolishly made a stab at engaging in a little on-line discussion about the watch list issue yesterday. My ground rules are that I would avoid name calling, respect the other guys arguments, and try to channel the discussion based on facts, not feelings. I really couldn't find anyone willing to stick with those guidelines. It's really pretty hard to talk about this, not unlike race. I suppose there are (at least) two Americas out there.