She's Way Too Crazy To Be President 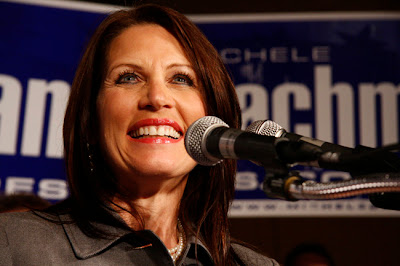 The physical and mental health of presidential candidates has become a paramount concern and Michele Bachmann, who is the frontrunner in some Republican polls, raises troubling questions in both areas.

The timing of the revelation that she suffers from weekly crippling stress-induced migraine headaches and mood swings just as her candidacy is surging is no accident.

Mainstream Republican bigs like Karl Rove, whose weapons of choice are long knives, know that if the Minnesota congresswoman gets the party’s presidential nomination she and the party will be toast in the 2012 election, but are too cowardly to confront Bachmann on policy issues for fear of alienating the junkyard dog wing of the party. And yes, some of the piling on is because Bachmann is a woman.

I presume but cannot say with authority that the 55-year-old Bachmann’s physical issues can be dealt with by medications unless she is, for example, profoundly bipolar and the mood swings are a result of chronic depression.

Besides which, she will be sure to release her medical records if she gets either the presidential or vice presidential nomination. All four candidates in 2008 did so, of course . . . Oh wait, Sarah Palin issued a muddled letter from her doctor on election eve and then refused to release any more information because the McCain-Palin ticket got creamed the next day.

What is troubling to me is Bachmann’s well-documented nutiness, which seems to be driven less by her physical problems than a world view fed by Christianist leanings, gay bashing, Tea Party dogma and outlandish conspiracy theories.

And do we want someone in the White House who rides the apocalypse bandwagon?

My blogging buddy Bob Stein said it best when he wrote that her admirers “may shrug off such revelations as prejudiced attacks on a highly spiritual candidate, but Bachmann has exceeded the speed limit for normal since she was elected to Congress in 2006.”