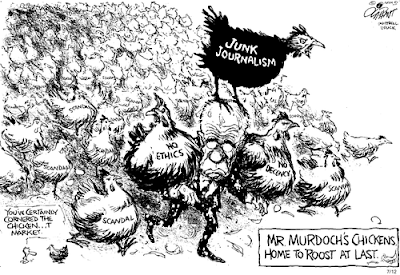 For students of schadenfreude and cheerleaders for the demise of the newspaper, what's not to like about the stream of revelations that Rupert Murdoch's Fleet Street empire is a criminal enterprise? That a man who got filthy rich and amassed enormous political power in Britain, the U.S. and Australia that would have made even Citizen Kane blush is revealed to be a godfather with printing presses rather than machine guns.

Unintentional as it was, the revelations come in the wake of "Gone With the Papers," by Chris Hedges at Truthout, an essay that by my lights is the most compelling take to date on the loss of a culture and ethic that as a reporter and editor put me at the center of some of the most import stories of the late 20th century while enabling me to travel the world and feed and educate my children.

"This loss is impoverishing our civil discourse and leaving us less and less connected to the city, the nation and the world around us. The death of newsprint represents the end of an era. And news gathering will not be replaced by the Internet. Journalism, at least on the large scale of old newsrooms, is no longer commercially viable. Reporting is time-consuming and labor-intensive. It requires going out and talking to people. It means doing this every day. It means looking constantly for sources, tips, leads, documents, informants, whistle-blowers, new facts and information, untold stories and news. Reporters often spend days finding little or nothing of significance. The work can be tedious and is expensive. And as the budgets of large metropolitan dailies shrink, the very trade of reporting declines. Most city papers at their zenith employed several hundred reporters and editors and had operating budgets in the hundreds of millions of dollars. The steady decline of the news business means we are plunging larger and larger parts of our society into dark holes and opening up greater opportunities for unchecked corruption, disinformation and the abuse of power."

Like Hedges, my mourning for the good old days is qualified by the belief that the wounds of newspapers are substantially self inflicted. And although Hedges does not mention Murdoch by name, he probably also shares my belief that the rapacious Murdoch has led the charge away from civil discourse, and in doing so has stripped away "one more bulwark holding back the swamp of corporate malfeasance, abuse and lies," as the former New York Times reporter puts it.

The result of course, is that it is ever harder for us to separate illusion from reality and fact from opinion, which is precisely the winning formula of that Republican Party mouthpiece, Murdoch's Fox News, which has been key to leading the GOP down an ever deeper rabbit hole.

Posted by Shaun Mullen at 12:25 PM
Email ThisBlogThis!Share to TwitterShare to FacebookShare to Pinterest

While it is sure delightful to see the guy who owns Fox get his head handed to him, and many of his staff fleeing, etc., nonetheless, what really is there to gloat at?
I have found the papers in general, as well as TV Cable, so unuseful that I have given up on them. Liberal? oh, sure...we can be smug and go back to the rags and programs we admire. But a careful look would show them wanting in coverage and filled with biases.

Want the news> then you need to go all over the place to fill in what this or that one does not give you or to discover the distortion that need correction--and that is a lot of work on a daily basis.