Musings During A Summer Heat Wave 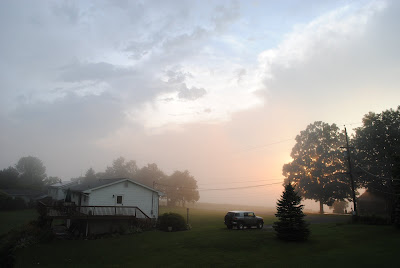 POST-STORM VIEW FROM THE MOUNTAIN RETREAT

I keep asking myself why congressional Republicans are so adamantly opposed to raising taxes and closing tax loopholes for the richest one percent of Americans, the folks who have a greater collective net worth than the entire bottom 90 percent.

The oft-cited reason that the John Boehners and Mitch McConnells offer is that raising taxes on the super rich would somehow hurt employment and therefore the economy, and I suppose it is possible that a few fewer Guatemalans would find jobs washing and waxing Ferraris and Bentleys in the Hamptons or Beverly Hills.

But if Republicans are so determined to pamper the super rich (they walked out of deficit-reduction negotiations the other day when it came time to discuss closing loopholes that could raise tens of billions of dollars), why do they want to cut off the elderly, poor and infirm at the knees?

* * * * *
Speaking of Republicans, it has been my view since the party got cuffed in the 2006 midterm elections that the GOP would have to go so far down that it couldn't see up before it began to loosen the hammerlock that right wingers have on it. That makes the possibility that Michelle Bachmann has a real chance of capturing the presidential nomination such terrific news.

* * * * *
After years of trying, I finally saw the Summer Triangle off the back deck of the mountain retreat the other night.

For the uninitiated, that is the imaginary triangle drawn on the northern hemisphere's celestial sphere. Its defining vertices are Altair, Deneb and Vega, which are the three brightest stars in the constellations of
Acquila, Cygnus and Lyra.

* * * * *
Wealthy shits like Rupert Murdoch who amass fortunes and political influence by not having scruples sooner or later crave respectability more than anything. But respectability can't be bought and the press baron will never have it.

* * * * *
Our chocolate Labradors have extraordinary noses. In fact, I call Nicky a schnoz being followed by a 65 pound dog, but that did not keep Jack from getting skunked during a romp in the woods.

The old home remedy of a tomato juice bath reduced the odor, but not by much. The solution, several wise heads told us, was repeated topical applications of Massengill Douche.

* * * * *
We are teevee free at the mountain retreat, so I find myself loading up on sports when I spend a weekend at the pied-a-terre.

Like the Tour de France (I watch for the spectacular scenery, not the cycling) followed by the Women's World Cup (stoic USA outkicks whiny Brazil) followed by the Philadelphia Phillies decimating the Atlanta Braves vaunted bullpen (14-1). What's not to like?

* * * * *
Who would think it? My book about an unsolved murder has rekindled a long-ago romance. The book has a Facebook page, you see, and through it a guy and a gal who were in love 30 years ago have been reunited. Now if we can just solve the damned murder.

* * * * *
The Dear Friend & Conscience and I attended a Fourth of July cookout. There were 15 other people, 14 adults and a teenager in all.

The hostess is an old friend and meant no harm, but she pointed out that no fewer than seven of her guests, including the teenager, are taking seriously powerful medications for depression and anxiety.

Is this what our society has begotten?

The Phillies have not seen the last of the Braves.

You'll get no disagreement from me on that. This is the best Braves team in years.

Just a gratuitous note from an ex-blogger to say how much I enjoy reading some real quality for a change.