The Staggering Ignorance Of John Yoo: The Rule of Law Is 'Largely Irrelevant' 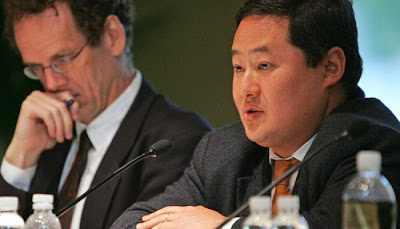 The greatness of the United State of America, no matter how tarnished it sometimes may seem to be these days, is substantially a result of it being founded on and dedicated to the Rule of Law. America's judges, prosecutors, lawyers, legislators and citizens have pretty much hewed to that hallowed concept over the republic's 230-plus year

history, which makes the assertion of Bush Torture Regime legal architect John Yoo that the law is "largely irrelevant" so staggering.

The leaps of logic in reverse-engineered opinions written by Yoo at the Justice Department's Office of Legal Counsel to provide legal backfill and ass covering for torture regime policies already well in place have been amply documented, as well as criticized in a yet-to-be-released report from Justice's Office of Professional Responsibility for "sloppy legal analysis, misjudgments and possible political interference in the process."

These leaps of logic include Yoo's disingenuous commingling of World War II prisoners of war with post-9/11 enemy combatants to make a point that misses the entire point, the defense of CIA 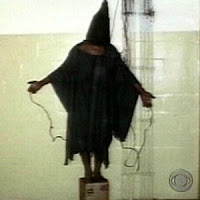 officials who overstepped even his own justifications for torture because to prosecute them would be an assault on the entire agency, as well as the assertion of Michael Mukasey, who was easily the most dangerous of the three Bush administration attorneys general, that Yoo and his brethren cannot commit crimes when they act under the orders of the president and the president cannot commit crimes when he acts under the advice of his lawyers.

This bring us to Yoo's latest defense in his vigorous and ongoing pushback against his critics.

Writing in the Chapman Law Review, Yoo finally acknowledges Ex parte Milligan, the most important legal opinion pertaining to habeas corpus in the history of American jurisprudence, as well as several related opinions that also seemed to have eluded him when he crafted

those OLC opinions. But in acknowledging Milligan et. al., Yoo jumps the shark in spectacular fashion in asserting that case law such as these is "largely irrelevant."

My legal background certainly is not as extensive as Yoo's, but I fall well short of his legal flights of fantasy. Meanwhile, habeas corpus in general and Milligan in particular have been of substantial interest to me since the 9/11 attacks and because this is the bicentennial year of Abraham Lincoln's birth.

interpret and use laws as he sees fit.

Just as Bush's constitutional sleights of hand were repeatedly rejected by the Supreme Court, most notably in three rulings that the Military Commissions Act was out of legal bounds because of its suspension of habeas corpus and other kangaroo court trappings, Lincoln was rebuked by the Supreme Court of his day in several rulings and then after his death in 1866 in Milligan, which stated unequivocally that habeas corpus can only be suspended by Congress and then only in a situation where civilian courts are not operating.

As Mary explains at Emptywheel, Yoo bases his argument on why he has been ignoring Milligan on the beyond astonishing claim that when the courts try to impose law on the Executive branch, both the president and Congress will respond "by disenfranchising and enfebbling the 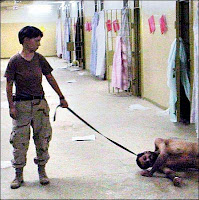 courts, so if courts know what is good for them, they'll butt out."

I urge you to go back and reread that extraordinary statement -- that courts should not carry out their constitutionally mandated duties -- while considering not only was Yoo the go-to guy for the torture regime, but today is a tenured professor at UC Berkeley's Law School as well as the leading legal eagle for the dregs of the Bush sycophancy when it comes to justifying the use of torture.

* * * * *
Meanwhile, the Obama administration has asked a federal appeals court to dismiss a lawsuit accusing Yoo of authorizing the torture of terrorism suspect Jose Padilla, saying federal law does not allow damage claims against lawyers who advise the president on national security issues. 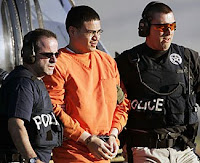 Such lawsuits ask courts to second-guess presidential decisions and pose "the risk of deterring full and frank advice regarding the military's detention and treatment of those determined to be enemies during an armed conflict," Justice Department lawyers said in arguments to the Ninth U.S. Circuit Court of Appeals in San Francisco.

And you know what, for as vile a person Yoo and culpable as he should be, I have to agree with the feds in this instance. Which doesn't mean Yoo shouldn't be disbarred, which he probably won't, or be dismissed by UC Berkeley, which he most definitely won't.