Guantánamo Meets Lord Of The Flies 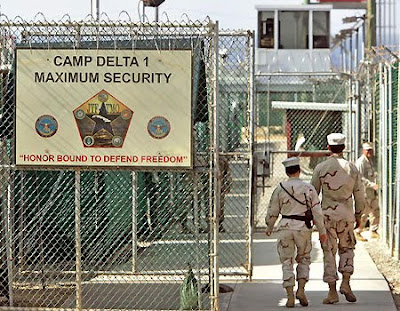 The effluvia of lies from the Bush Torture Regime (some of which have been repeated on Barack Obama's watch) spewed forth with such regularity that they eventually became so much background noise. But the story of the simultaneous deaths of three Guantánamo Bay detainees on the night of June 9-10 2006 in one of the most patrolled and monitored prisons

anywhere is bizarre to say the least.

What we were told at the time was that the three detainees had somehow managed to commit suicide at the same time on Alpha Block at Camp Delta in what the Pentagon termed an example of "asymmetrical warfare."

What we now know thanks to the summary (pdf file) of an investigation by the Center for Policy & Research at Seton Hall University Law School is that:

* The prisoners had been on Alpha Block less than 72 hours and were separated by other occupied cells.

* The prisoners somehow had been hanging for two hours with rigor mortis when they were discovered.

* Each of their bodies were found to have a rag stuffed deep down their throats.

* Each of the three somehow braided a noose by tearing up his sheets and/or clothing, made a mannequin of himself so it would appear to the guards he was asleep in his cell, hung sheets to block vision into the cell, tied his feet together, tied his hands together, hung the noose from the metal mesh of the cell wall and/or ceiling, climbed up on to the sink, put the noose around his neck and released his weight to result in death by strangulation, hanged until dead and completely unnoticed by guards.

Meanwhile, in the service of a cover-up, Seton Hall found that there is no explanation as to why:

* The guards were ordered not to provide sworn statements about what happened.

* The government seemed to be unable to determine which guards were on duty that night.

* The guards who brought the bodies to medics did not tell them what had happened to cause the deaths and why the medics never asked how the deaths had occurred.

Words again fail, but this thought does occur: What is the Pentagon covering up? And this one, as well: Some of the Camp

Delta detainees were and are very bad people, but the Rule of Law is not an adjustable wrench where rights and responsibilities diminish with a defendant's alleged badness.

To underline that, note that the investigative report is the eleventh in a series on Guantánamo by the Seton Hall Law, including one establishing that over 80 percent of the prisoners were captured not by Americans on the battlefield but by Pakistanis and Afghans, often in exchange for bounty payments.