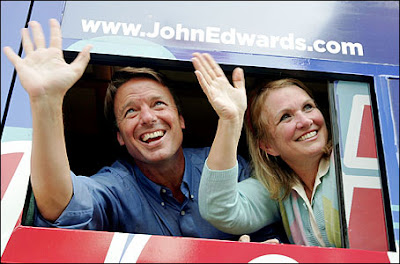 I promised myself that I would not blog on the Jennifer Aniston-John Mayer smash-up, and it's been like only 72 hours since I last wrote anything about the John & Rielle Show, which actually had more to do with electrocuting horses than short circuiting political careers.

But a newly-published account concerning Edwards shamelessly using his wife's cancer to try to guilt trip a newspaper editor into the presidential wannabe's own Cone of Silence cannot go unnoted.

"Edwards told me that the allegations were not true.

"He said The N&O was the paper that arrived on his doorstep every day, the one read by friends of him and his wife, Elizabeth.

"He said he'd never called before to complain or state his case. Given Elizabeth's health -- she has cancer -- he said it was especially important to him that the story not run in The N&O."

Drescher says that as it turned out, The N&O did not run the story on the National Enquirer's scoop because it was based on only a single source, and there is an element of sour grapes in his account because when John Boy finally realized that it was curtains he blabbed to ABC News and not his hometown paper.

Still, is this guy a shameless sonofabitch or what?

Posted by Shaun Mullen at 1:19 AM
Email ThisBlogThis!Share to TwitterShare to FacebookShare to Pinterest