Who Are The Grateful Dead, And Why Do They Still Keep Following Me Around? 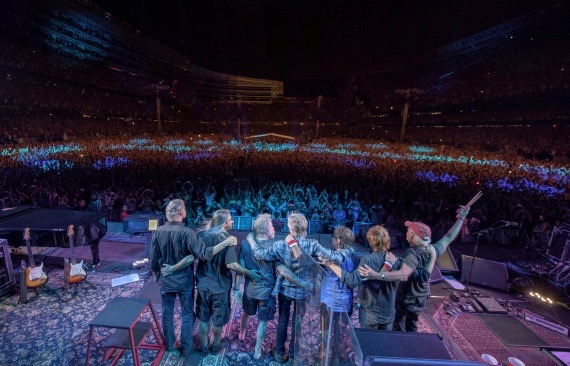 Back in the day, I saw 100 or so concerts by the Grateful Dead and their various offshoot bands, and I actually remember most of them.  So it stands to reason that a musical family that belted out the Zen-like lyric "Once in a while you can get shown the light in the strangest of places if you look at it right" would never be too far from my consciousness even 25-plus years after my last show, which happened to be the last show at a venerable pile called JFK Stadium in Philadelphia on the very weekend before that concrete monstrosity was condemned and razed.

I bring this up in connection with the latest instances in which the Dead keep following me around. (And because this is my blog and I can write whatever I want.)

The first latest instance is a serendipitous blast from the past: I had recently replayed in my head aspects of a particular concert -- August 4, 1974 at the old Philadelphia Civic Center -- that was memorable for its awesomeness and all of the friends who were along for that particular ride.  I do that replay thing from time to time.

Anyhow, an outsized number of these concert-going friends have come cartwheeling back into my life because I blogged the other day on the occasion of the would-be 70th birthday of one of them. Who actually didn't give a fig about the Dead and was not at that concert although he was invited. Everyone who did go knew him, but that's not the point.  Lest we forget a mere three paragraphs on, being shown the light in the strangest of places is.

In addition to all the friends, a couple three things stand out from that concert, which was one of the band's best during their Wall of Sound era.

* We got seriously, up-to-the-axles stuck in the driveway at the farm leaving for the concert.  This was back when the short driveway was impassable and we used the long driveway, which was awash in mud after a full moon deluge.  Our stuckage owed to the fact there were about 1,600 pounds of hippie crammed into my VW bus, which when relieved of all but the driver -- moi -- managed to motor out of the mud.  And so off we went.

* Muddy, but no worse for wear, when we finally got to the Civic Center, Phil Lesh put on a bass guitar clinic for us, and during the intermission performed snippets from the under appreciated  Seastones album with pioneering electronic keyboard player Ned Lagin.

* The second set, which opened with a snappy rendition of  "Take a Step Back" because of the crush of people in front of the stage, morphed into an extended jam that went places not found on any map, although possibly visible using the Hubble Space Telescope.  The set included a full "Weather Report Suite," something Deadhead readers will appreciate.

The serendpituous thing came about 4 in the morning on the day after my August 4, 1973 reverie as I settled my sleepy-headed self into the cockpit of Deborah's rice rocket for a pre-dawn sprint to Delaware.  Before I pulled away, I tuned in the Dead Channel on SiriusXM satellite radio just as a soundboard recording of that second set at the Civic Center commenced.  Whew!  The encore was thump thumping out of the speakers some 90 minutes later as I crossed the state line into Delaware.

The second latest instance is a bit of fascinating new news regarding the band's "Fare Thee Well" reunion/retirement shows last year.   The two in Santa Clara were filmed in virtual reality, some nine hours in all, which reminds us that even on the cusp of retirement, the band kept innovating as it had throughout its 50-year history.

The shows were filmed with five cameras -- three on stage and two in the audience -- to allow viewers to look in all directions.  (Talk about being shown the light!)  Only "Truckin'" from one of the shows has been shown in public, but the band and producers are in talks to release more footage.


PHOTOGRAPH BY JAY BLAKESBURG
Posted by Shaun Mullen at 12:03 AM
Email ThisBlogThis!Share to TwitterShare to FacebookShare to Pinterest