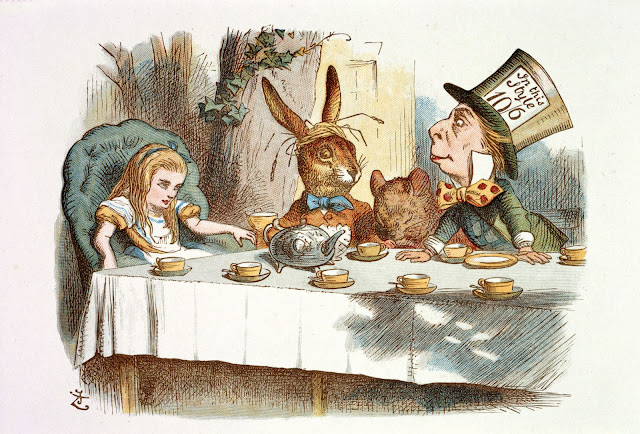 Exhausted of clichés, meaningful analogies and pertinent precedents, I have arrived at a point when even Through the Looking Glass comparisons do not capture the . . . uh, pornographic nature of the Republican presidential campaign.

I'm not talking about blow jobs and butt sex on a flying trapeze, but a nihilistic tawdriness so graphic that, like filmed smut, is no longer shocking after repeated exposure.  Alice was right when she said "We're all mad here."

And what is curiouser and curiouser, to steal another Lewis Carroll-ism, is that things kept getting curiouser still as Donald Trump fits the crown of "presumptive nominee" on his peculiarly coiffed head, Lyin' Ted Cruz immolates as he faces the prospect of cutting crushed in the must-win Indiana primary today, and faux moderate John Kasich fades to gray.

It is a sign of the sickness of our determinedly sexist society and the perversity of the lavishly fawning media coverage that Donald Trump receives 24/7, that he actually is being praised for taking the gender "issue" head on.

By gender, I mean that Hillary Clinton happens to be a woman.  That the fact she has lady parts where the guy with small hands has man parts makes supportable the unrelentingly oafish and deeply unpresidential attacks of this career misogynist against his likely opponent in November, as well as the swiftboating of any skirt that doesn't suck up to him.  That somehow Trump's allegations that Clinton is "playing the woman card" are valid, while it is out of order to suggest that he is playing the man card, whatever the hell either of these cards might be.

Trump's attacks are, of course, exercises in delusion.

His already memorable line that Clinton would get only 5 percent of the vote if she were a man is not merely a strategic misstep in a clumsy effort to deflect scrutiny of his own weakness among woman voters.  It pretty much guarantees disaster because women -- even Republican women -- are more likely to vote than we menfolk, and they tend to be a lot smarter and clear-eyed about it.  They know that although Clinton has weaknesses, she has worked tirelessly for women in a world where authority and power are perceived to be male qualities.

As it is, the former presidential wannabe has chosen the firing squad in tepidly endorsing The Donald, and a lot of people seem to be following suit as Cruz's popularity crashes with a new Gallup poll showing that the Texan has a net favorable rating of negative 6 percent among likely Republican voters, and we're not even taking the GP (general population) here.

Cruz's popularity beyond Bible-thumping Evangelicals has been tentative, at best, and the man described as the most loathed in Washington has been tanking since mid-April despite -- or perhaps because of -- striking a deal with John Kasich to gang up on Trump and then naming Carley Fiorina as his running mate should he get the nomination, which now seems most unlikely.

The 2014 midterm elections were a disaster for the Democrats, who lost the Senate -- and with it the only buffer for President Obama between the White House and Capitol Hill insanity.  But redemption is rearing its head in the form of Donald Trump, the deep unpopularity of that cud-chewing obstructionist Majority Leader Mitch McConnell, and good old electoral math.

The Republicans picked up nine seats and a Senate majority in 2014 because of Obama fatigue and the significant number of vulnerable Democratic seats.  But this year, Democrats have only 10 seats to hold onto while Republicans have a whopping 24, including seven in states that Obama won in 2008 and again in 2012, and Trump is having the salutatory effect of poisoning down-ticket races because he not only won't have coattails, but he is so deeply unpopular that few Republican Senate incumbents dare endorse him.

Republican Senate seats in Wisconsin and Illinois appear ready to be flipped, while seats in Florida, New Hampshire, Ohio and Pennsylvania are leaning Democratic, and seats in Arizona, Indiana, Missouri, North Carolina and even Iowa could be in play.  That's 11 seats, the Democrats need only five to recapture a majority.

"All the money in the world is not worth what a good presidential candidate would be worth," explains Kyle Kondik, a political analyst at the University of Virginia.  "The members who pay the price for extremism [at the top of the ticket] are not the extreme members."

And how about this factoid: McConnell's Senate is on track to be in session a mere 124 days in 2016, its lightest schedule since 1956, which seems outrageous until you consider that the Greatest Deliberative Body in the World doesn't do jack when it is in session.

"People will be judged by where they stood at this time," writes The New York Times op-ed columnist and house conservative.  "Those who walked with Donald Trump will be tainted forever after for the degradation of standards and the general election slaughter."

One of the sadder spectacles of this mad election season has been the Pianos Keep Falling on My Head dismay of Brooks, who has always been about being nice and worshipful of the Republican Party.  Unfortunately for him, the GOP he's long worshiped is the Big Tent party of his father, or perhaps even grandfather, when conservatism a la William F. Buckley and Nelson Rockefeller was valued and moderation honored.  It died years ago right under Brooks' nose, and only in the last few months has the stench reached him.

To give credit where it's due, Brooks has come around to acknowledge the new normal in all its obsceneness, and he's right that the Republican stalwarts embracing Trump in droves, including a fair number who had been on the Ted Cruz bandwagon, will be tarnished for their sycophancy long after the celebrity billionaire loses to Hillary Clinton in a landslide of historic proportions and becomes a history book asterisk.

And damned well should be.

Andrew Sullivan is baaack after a long hiatus, and not a day too soon:

"[As] I chitchatted over cocktails at a Washington office Christmas party in December, and saw, looming above our heads, the angry pulsating face of Donald Trump on Fox News, I couldn't help but feel a little nausea permeate my stomach.  And as I watched frenzied Trump rallies on C-SPAN in the spring, and saw him lay waste to far more qualified political peers in the debates by simply calling them names, the nausea turned to dread.  And when he seemed to condone physical violence as a response to political disagreement, alarm bells started to ring in my head.  Plato had planted a gnawing worry in my mind a few decades ago about the intrinsic danger of late-democratic life.  It was increasingly hard not to see in Plato's vision a murky reflection of our own hyperdemocratic times and in Trump a demagogic, tyrannical character plucked directly out of one of the first books about politics ever written.

I urge you to read the whole thing.

POLITIX UPDATE IS WRITTEN BY SHAUN MULLEN, A VETERAN JOURNALIST AND BLOGGER FOR WHOM THE 2016 PRESIDENTIAL CAMPAIGN IS HIS 12th SINCE 1968.  CLICK HERE FOR AN INDEX OF PREVIOUS COLUMNS. © 2015-2016 SHAUN D. MULLEN.

ILLUSTRATION BY JOHN TENNIEL FROM THE NURSERY ALICE