Politix Update: Trump, The Ghost Of Lee Harvey Oswald & Future Of The Republic 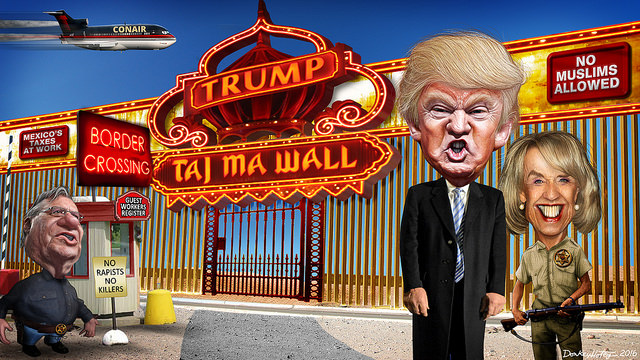 With malice toward none, with charity for all, with firmness in the right as God gives us to see the right, let us strive on to finish the work we are in, to bind up the nation’s wounds.  ~ ABRAHAM LINCOLN

Never let it be forgotten that on the day Donald Trump all but clinched the Republican presidential nomination he again intimated that there would be blood in the streets of Cleveland if he is denied that reward, mocked foes long gone from the race, and accused the father of his last remaining credible opponent of being connected to the assassination of John F. Kennedy.  That is what we have to look forward to over the next six months, let alone what would transpire in the nightmarish event that this Frankenstein of a man were actually to assume the mantle of the most important job on the planet.

That reality seems not to have sunken in, and even this pundit who saw the future in the not too distant past, continues to grapple with its enormity.

Meanwhile, the cable news and television networks went about their post-Indiana primary coverage with a customary fickleness that quickly lapsed into gross irresponsibility as the usual talking heads treated the ascendancy of a billionaire with a profoundly vile world view and a nativist lynch mob to cheer him on to the Republican nomination as just another event in the long slog to another Election Day and Ted Cruz as just another politician with a bruised ego.

There were the usual references to the reality show star with the small hands and peculiar hair having tapped into some mysterious wellspring of discontent, but not a peep that a 160-year-old political party that traces its roots to a guy by the name of Abe Lincoln has been neutered through  a hostile takeover by a white nationalist whose diamond-encrusted ring a good many Republican lemmings are now getting in line to kiss. And then it was time for the taking heads to move on -- to Hillary Clinton, the death of a Navy SEAL in northern Iraq, and didn't Beyoncé look just lovely on the red carpet at the Met Gala in her pearl-embroidered Givinchy Haute Couture latex gown?

The media is responsible for creating this latest iteration of  Trump, as opposed to real estate tycoon Trump, sports team owner Trump, casino magnate Trump, National Enquirer fanboy Trump or "The Apprentice" Trump, as well as enabling his dizzying takeover of the Republican Party.

But now that Trump has succeeded beyond the wildest dreams of the Nazi, hate and other crypto-terrorist domestic groups who have enthusiastically endorsed him and extremism has become the new normal, only the Republican Party itself -- the very folks who enabled Trump through its racism, obstructionism and hatred of Barack Obama -- remains an obstacle to him skating dangerous close to winning it all should Clinton immolate.  In 2016, implausible does not mean impossible.

The GOP could make the implausible impossible by manning up behind a credible third-party sacrificial lamb who would assure that Trump would lose.

But as the acrid smell from Indiana slowly dissipates, the party is far more concerned about "unifying" what remains of a dissolute conservative movement than what is a moral necessity, let alone could be an historic act of altruism in taking responsibility for having created something a great deal more consequential to the future of the republic than a cleanup in Aisle Five.  And then there are the party bigs who disingenuously hint that if only the substance-free Trump would "tone down his rhetoric," they'd clamber on board, or are going through the rhetorical contortion of saying that they will "support" him but not "endorse" him.

That sound you hear is Dwight Eisenhower, a Republican from the good old days who happened to have help save us from fascism, spinning in his grave.

IMAGE FROM DONKEYHOTEY/FLICKR.
USED WITH PERMISSION.
Posted by Shaun Mullen at 3:00 PM
Email ThisBlogThis!Share to TwitterShare to FacebookShare to Pinterest

The Party of No has become the Party of Know-Nothing, and it's reaping the bitter fruit of its intellectual bankruptcy, obstructionism, and duplicity. Couldn't happen to a nicer bunch. Trump's likely going to go down in a Goldwater-esque defeat, and let's hope he drags the GOP majority down with him.

Methinks that if Donzilla does indeed become president it will be because
he was destined to do so. Then comes amazing success for a little while
followed by martial law followed by.........Oh well,you know the rest.......

I’ve voted mostly Democrat for the last 50 years, but not exclusively. I live in Delaware and regularly voted for Mike Castle because he seemed like a decent man with a level head, and I thought the Republicans needed more folks like him.

When, in 2010, Delaware Republicans voted for Christine O’Donnell to run for the Senate against Chris Coons, effectively ending Mr. Castle’s career, I merely shook my head and lamented, once again, about the state of the Republican Party. A once noble political institution degraded to a loosely bound coalition of venomous special interest groups, each with their own axe to grind.

Ms. O’Donnell ran a vicious, slanderous campaign against Mr. Castle, and yet the Republican voters ate it up – dispatching a respectable, moderate individual to the political dustbin.

I had hoped Mr. Castle would, at that point, come out and endorse Mr. Coons over Ms. O’Donnell, not for the sake of revenge, but as a way of trying to bring the seemingly few remaining centrist Republicans back to thinking about the good of the State and nation, rather than “winning” or “losing”.

However, Mr. Castle chose to close ranks and picked “party loyalty” over intelligence and decency.

Donald Trump is not the problem. Donald Trump represents the problem. He would not be in the position he is now without the support of millions of angry half-wits - the same ilk of narrow-minded, vitriolic, phobic individuals who brought Christine O’Donnell to the forefront in Delaware.

The citizens of this country who would choose a volatile, self-absorbed, greed-driven, buffoon to lead them, are the problem. How many of them are out there? If there are enough of them to elect The Donald, then the country is truly doomed. The Donald will simply become the master of ceremonies presiding over the sunset years before the rest of the world will be forced to kill the wounded, rabid, berserk beast of a “Great” United States.

If we have any hope of restoring moderation and clear thinking in our political process, the Republican leadership who are still capable of rational thought needs to denounce The Donald and renounce the Republican Party. They don’t have to become Democrats, they can announce themselves to be Independents and then regroup after the elections. Maybe such an act would shock some sense back into some of the saner potential voters who are getting sucked into The Donald’s cranial vacuum.
If there are enough mad men and women out there to elect Mr. Drumpf, then the nation should get what it deserves. Hello, Armageddon.

Hopefully, things aren’t as bad as I fear, and Ms. Clinton will win by the largest margin of victory in the history of U.S. Presidential elections, even if the election also sets the record for the lowest ever percentage of participation. Considering the alternative, I’ll take it.

Since when has altruism been a characteristic or a human value to anyone who counts himself a Republican these days? . . . Watch as the entire party cadre embrace and salute Heir Drumpf rather than acknowledge Hill's resume.