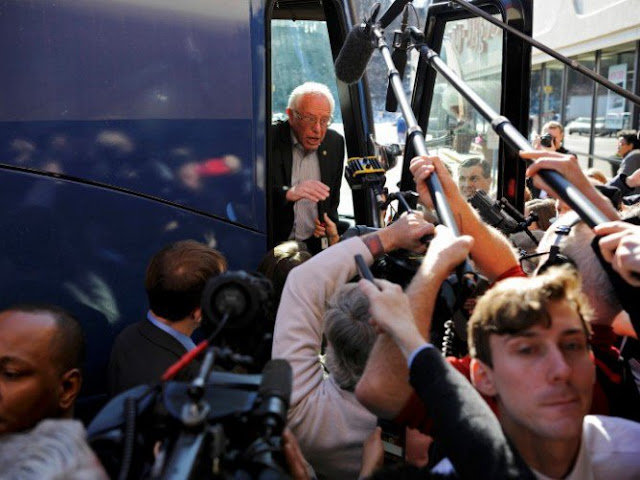 There is only one thing you really need to know to understand why the news media has done such a craptastic job of covering the 2016 presidential election campaign: Donald Trump has received twenty-three times more network nightly news time than Bernie Sanders although their level of support is similar in national public-opinion polls.

This is doubly unfortunate -- no, make that outrageous two times over -- because the campaign is exciting and demanding of good coverage while the voting public needs an informed and vigilant news media more than ever.  Yet the media has been irresponsible in not just failing to warn people about Trump, but in validating this celebrity fascist with a qualms-absent free ride only occasionally interrupted by a story or broadcast calling into question his racism and xenophobia, utter lack of qualifications, lies, slanders and preposterous policy prescriptions.

Then there is the matter of the pitchfork sycophancy that has propelled Trump to the verge of the Republican nomination.  The news media was not merely slow in catching on to who Trump's supporters are and why they're so frigging angry.  Then once it belatedly began to decipher this riddle -- My God! There is an Other Half and you wouldn't believe how they live! -- the media failed to grasp the larger picture.

This presidential campaign is my 12th as a journalist and blogger since my first as the proverbial cub reporter in 1968, while I directed campaign coverage for a large metropolitan newspaper in 1984, 1988, 1992 and 1996.  Each campaign started with similar exhortations from my bosses: We were to cover the campaigns aggressively and from a what-it-all means perspective.   Most importantly, we were to get out ahead of the pack in not just breaking stories but determining the overall direction of the campaigns.

These marching orders typically lasted a month or two, at most, and then with a Law of Gravity inevitability, events started getting away from us, we ended up riding on the candidates' press buses with the rest of the pack instead of forging ahead on our own in rental cars, and before you could say "Lee Atwater is a weenie," were reacting and not proacting. In other words, we were covering the campaign like pretty much everyone else.

That dynamic has not changed because missing a story no matter how incidental it may be remains a cardinal sin in 2016, which while not diminishing the importance of the "exclusive" or "scoop" -- being first with a story -- is a powerful disincentive for breaking away from the pack for all but the most deeply resourced outlets like The New York Times.  Yet The Times, while occasionally calling out Trump, was pretty much as slow as the rest of the pack in figuring out who Trump's supporters were and why they were supporting him despite its deep bench, more analysts than the RAND Corporation and one of the best pollsters in the business.

This brings us to the larger picture.  Writes the great Will Bunch at Attytood, a blog that is one of the few remaining gems in the once glistening Philadelphia newspaper crown:


"The next president -- whether it's Donald Trump or Hillary Clinton or Bernie Sanders or Boaty McBoatface -- is going to have to be honest and admit that the type of unfettered capitalism that America has practiced since 1981 has failed most, if not 99 percent, of its citizenry.  It's a cancer of lost jobs and lost wages that started with the de-industrialization of the inner city and has now metastaszed in the rural areas and some suburbs, leaving too many voters too willing to succumb to the basest appeal from the lowest common denominator.  And that low number turned out to be not the short guy with the funny mustache that some folks were nervously waiting for, but a billionaire reality-show host with an orange comb-over."

Yes, many of Trumps supporters are walking an economic tightrope and there is indeed much truth to their real-life agonies.  But to say, as has the media in deciphering the first part of the riddle, that Trump's ascendancy is a legitimate expression of their pain masks the second, undeciphered part of the riddle -- the sulfurous stench of racism and the not so transparent hope of this uniformly white and mostly male constituency that Trump can somehow restore the racial hierarchy upended by Barack Obama.

The Trump vs. Sanders network evening news example at the beginning of this post is a little misleading.  The once widely watched and admired anchors for ABC's World News Tonight, CBS's Evening News and NBC's Nightly News have become dinosaur riders in an era of the 24/7 cable news cycle, and it is social media that candidates go to when they want to connect with the public. The big problem with social media is, of course, that it turns even the meatiest pronouncement into hashtag minutia, and we have obediently responded by training our minds for increasing shorter attention spans.

If you are a quasi-dinosaur like myself who has a Facebook page but resolutely refuses to tweet, blame Barack Obama and the so-called Facebook election of 2008.  All of the candidates in 2016 are more or less social media savvy, with Ted Cruz live streaming on Periscope and Hillary Clinton on Spotify.  Bernie Sanders attracts two million Facebook followers, but Donald Trump -- described by one pundit as a natural-born troll -- is the master with his often offensive and usually provocative tweets, which go to four million followers and enable him to further dominate the media.

The truth few dare to speak is that the biggest reason for the craptastic coverage is that politicians and the news media have become extraordinarily reliant on each other.

Politicians rely on the media to grease the skids of the primary campaign-nominating convention-general election cycle and the media relies on politicians to justify their existence, indirectly remunerating them for their coverage and rewarding them with celebrity and stature.  (Can you say Megyn Kelly?)  The consequence is that the relationship between pols and the media -- what I have called the Political-Media Industrial Complex -- is so incestuous that they have have become intolerant of the people who sustain them.

For the Political-Media Industrial Complex, Donald Trump will have just been a horrible dream from which they mercifully awoke as the 2016 campaign begets the 2018 mid-terms and then the next big dance in 2020.  Joan Didion, that diminutive woman of letters, covered several presidential campaigns, concluding that:

"It came to my attention that there was to writing about politics a certain Sisyphean aspect.  Broad patterns could be defined, specific inconsistencies documented, but no amount of definition or documentation seemed sufficient to stop the stone that was our apprehension of politics from hurtling back downhill."

The old story line will become the new story line, and the rules will be observed and obeyed. Political con men will go on being con men without being called out because the media once again will have its head collectively up its ass.  But for the rest of us, the nightmare of a complacent and compliant media will continue.

© 2015-2016 SHAUN D. MULLEN.
PHOTOGRAPH BY REUTERS
Posted by Shaun Mullen at 12:03 AM
Email ThisBlogThis!Share to TwitterShare to FacebookShare to Pinterest

"In a new segment titled "How the F--- We Got Here," Noah slammed the media for creating Trump, targeting CBS chief Moonves in particular for comments he made at an investor conference last month when he said, "The money is rolling in, and this is fun." Added Moonves: " "They're not even talking about issues; they're throwing bombs at each other, and I think the advertising reflects that. This is going to be a very good year for us. Sorry, it's a terrible thing to say, but bring it on, Donald.' "

But what would you or I have done differently in Moonves place, other than not being quite so candid? The news biz is a tough place these days, and the media players are going to make money while they can. There's an insatiable demand for all things Trump. He's a once-in-a-lifetime political freak show. I'm going to enjoy the show while it lasts, confident the American people as a whole have far too much intelligence and decency to let him near the White House.

I wonder if you recall that in the '72 campaign, when Curtis Wilkie filed from the road that a hotel maid informed him that the Wallaces took all the soap and shampoo from their room when they left, the News-Journal news editor then (what WAS his name?) spiked Wilkie's report BECAUSE nobody else had that tidbit!

Pack journalism may start in fear on the campaign trail but it continues on the editors' desks. It takes guts to go with the outlier report that offers true insight, and courage and independence remain in short supply in newsrooms, like most workplaces.