Politix Update: A Gadzillionaire, An Evangelical & A Neo-Nazi Walk Into A Bar . . . 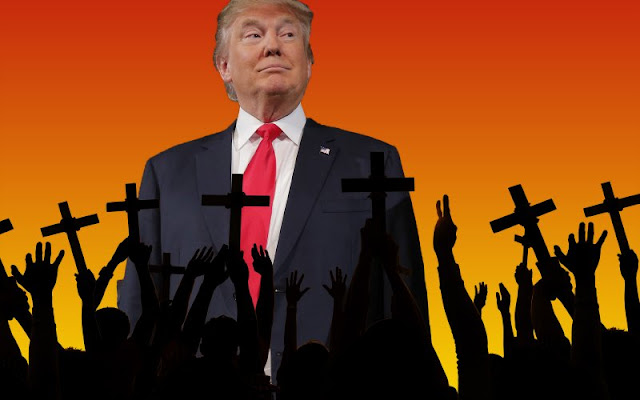 Donald Trump couldn't tell the difference between a communion plate and a Frisbee, yet he is attracting substantial numbers of Evangelicals in what has to be the oddest phenomenon of a very odd political season.

Never mind Trump's stunning primary election successes, including decisive victories on Tuesday in Michigan, Mississippi and Hawaii.  The Republican Party elites still believe that -- please God -- the man with the peculiar hair can somehow be stopped.

Speaking of God, Trump's support among Evangelical voters has grown steadily, and he has been getting a substantially larger percentage of their votes than Cruz, the son of a minister who talks like a preacher teaching the gospel.  So how is it that a thrice-married, foul-mouthed narcissist who has been pro-choice and pro-gay is resonating with the God Squad?

Because Trump is articulating the fears of Evangelicals since Barack Obama, who we all know is not really a Christian, let alone an American, became president and they realized that the Republican Party establishment has sold them down the river in repeatedly promising to fight their battles.  And he, like Cruz, is keen on waging religious wars.

"The problem with fear is that fear causes us to basically shut down," says  Tony Perkins, president of the Family Research Council and a Cruz supporter.  "Fear and faith are incompatible."

Some voters demand to see a person's record, notes Ken Klukowski, senior counsel at the Liberty Institute, which seeks to defend religious freedom.  "Others, if they are hearing the right things, they feel so abused by some elected officials in the Republican Party they thought they could rely on, that they are cynical of politics in general."

Evangelicals, bless their pointy little heads, also seem to be forgiving.  They got behind Mitt Romney even though he once was a pro-choice Planned Parenthood guy, and they backed Newt Gingrich despite his seamy record of extramarital affairs.

It also may be that the definition of Evangelicals has been bent a bit out of shape.

"In the past, Evangelicals were people who had moral and culture conservative values and they cared less about the economy and jobs," says Michael Cromartie, vice president of the Ethics and Public Policy Center.  "Either they have put on deep dark sunglasses and are saying they like a person who speaks bluntly and emphatically about the fact we don't win anymore or the definition has grown too broad."

Understanding that Evangelicals are not monolithic, and that the people supporting Trump are sometimes referred to as "soft Evangelicals," it is more accurate to understand that many of them are Christianists, self-righteous churchgoers who use their faith as a cudgel for political and personal gain, and are members of the Religious Right, which as anyone who has watched their attempted takeover of the Republican Party knows, are people who believe not in the politics of hope, let alone a vision of a common good for all people as preached by the Son of God, but a nihilistic cynicism fueled by deep resentment.

Yes, those nice fellas impeccably dressed in black suits with black briefcases and black bound Bibles in hand, who always pick the worst time to come to your front door to proselytize, surely are good souls.  But as a group, Evangelicals have tarnished their halos by tying their fortunes to the success of Republican politicians, let alone those who use their God like a cudgel to bludgeon we heathens with their neanderthal social agenda like Cruz, or Mike Huckabee and Rick Santorum before him.

That Trump doesn't swing the God cudgel doesn't matter, because it's not really about faith or spirituality for Evangelicals.  It's about intolerance.

A quick riff on the state of play after the Tuesday primaries:

Bernie Sanders squeaked by Hillary Clinton.  Good for him, but that does not alter the dynamic of the race.  He's still toast.

Marco Rubio needs to drop out.  Now, not after he gets crushed next week in Florida.

The Kasich campaign is on life support.  He'll probably pull the plug after the Ohio primary next week.

The most hated man in the Senate won Idaho.  Whoopie!  I'll give Ted Cruz another month, tops.

The Republican Party elites may still believe that the man with the peculiar hair can somehow be stopped, but they've run out of warm bodies.

Some new insights on your recent post. It reminded me of what I have observed about an evangelical I knew 35 years ago. They sit in their pews two to three times a week and listen to and believe every word the preacher says to them. They are not allowed to think for themselves or interpret scripture according to how they read their Bible. I questioned this fellow parent along the lines of my more liberal Christian (Disciples of Christ/ Christian Church) upbringing I had experienced for she seemed to be fairly intelligent though not college educated. She was somewhat amazed that I was allowed to think for myself in my church. It had never dawned on her that it was a possibility.

So if many other evangelicals are like this woman they listen to the guy in the pulpit (Trump?) and follow like sheep. He is preaching to their baser instincts which even their ministers would not do. The fact that he is behind a podium and certainly thinks of himself as god like must be a natural for many of them. My question would be whether Trump is aware of what is actually going on or if he just lucked into it and is riding that wave.

I’m a little worried and it all makes me a bit sick to my stomach. All the while knowing the Republicans will be using their dirty tricks as a party through the election and continuing with a Democratic president being elected. I sure hope Hillary hangs on to be elected because it feels like the only sanity out there. Then I hope there is a strategy in place to keep the Republicans from dragging her off task as they tried with Bill for his entire 8 years.

Will it never end?