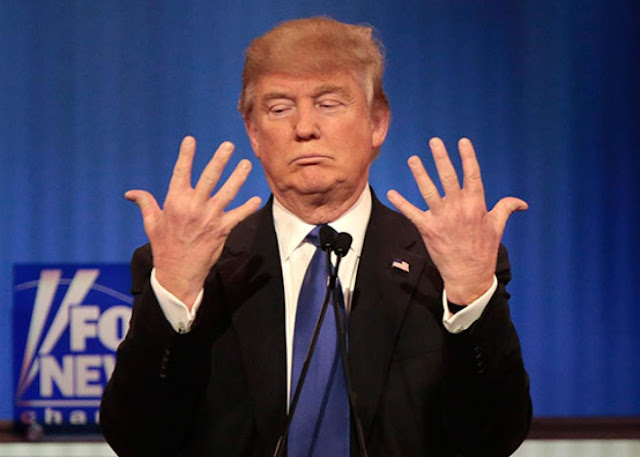 I have a confession to get off my hairy masculine chest before we move on to the main event, the Fox News-sponsored Republican presidential debate last night: I am sick of reading and hearing about white fears and white resentment, and my heart is breaking over the toxicity that has bubbled up and into our lives with the ascendancy of the man with the peculiar hair and small hands who preaches that racism and rank nativism are as American as apple pie.

And so we had the spectacles this week, among far too many other examples of the vileness abroad in the land, of a discussion on CNN about the virtues of Donald Trump's Ku Klux Klan compadres and how those damned Democrats are dividing people by race by calling Klan members terrorists, as well as high school basketball teams facing off in rural Iowa with fans from an all-white school taunting their opponents from a black and Hispanic school with chants of "Trump! Trump! Trump!"

Only a few hours before the candidates "debated" in Detroit, a "stern" Mitt Romney called front-running Trump "a phony" and "a fraud" and urged Republicans to rally around one of Trump's rivals in an "impassioned" speech that had the stink of last-ditch desperation about it.

The setting for the seventh (or is it eighth? who the hell is counting at this point?) Republican debate could not have been more appropriate since the Rust Belt city has been way down on its luck, something you may not have heard about at the previous debates, but about which the last Republican presidential nominee -- the aforementioned Romney -- wrote an opinion piece headlined "Let Detroit Go Bankrupt," an exercise in what once was quaintly referred to as compassionate conservatism.  I also vaguely recall Romney's own history with Trump in 2012, whose endorsement he eagerly -- and now, it seems, hypocritically -- accepted although Trump was sniping at President Obama with accusations that he was a Muslim-educated Kenyan who was not born in the U.S.

Well, the stage last night certainly was smaller.  Dr. Ben was gone, as were that Crispie fellow and Jeb!  Oh, and Mean Carly, too.  But the evening still had the ambiance of a séance for crazy uncles at an insane asylum with Nurse Megyn presiding.

Trump, of course, missed the last Fox News debate because Nurse Megyn insisted that he take his medicine.  But a lot has changed beyond those other crazy uncles and Aunt Carly getting their discharge papers, along with complimentary packets of Prozac, we hope.  Most notable is that Vladimir Putin's authoritarian fanboy was confirmed in the lead role of Randle McMurphy on Super Tuesday after weeks of boffo previews in other primary states.  (You may recall McMurphy as the recidivist anti-authoritarian in One Flew Over the Cuckoo's Nest.)

Nurse Megyn's hormone balance seemed to be just fine, but Trump was thrown off his game time and again, even if he mostly acted impervious to relentless attacks from Ted Cruz and Marco Rubio, who picked up where Romney had left off.  (John Kasich showed up, but was a no-show).

In an exchange that will have people shaking their heads from Paris to Penang, Rubio and Trump traded innuendos over who had the larger penis after a Fox moderator criticized Rubio for abandoning his pledge to run a positive campaign, which has included a taunt that Trump wet his pants under pressure at the last debate.

The Mine's Bigger Than Yours kerfuffle started with Rubio, who had said of Trump at that last debate, "He's like 6'2", which is why I don't understand why his hands are the size of someone who's 5'2".  Have you seen his hands?  And you know what they say about men with small hands?"

"He hit my hands.  Nobody has ever hit my hands.  I never heard of this," he whined, and then riffing off previous boasts about his sexual exploits, puffed up his chest and insisted that what lurked between his legs was not small.

When Rubio later asked Trump whether he had ever answered a policy question substantively, Trump responded: "Don't worry about it, little Marco."  Rubio fired back: "Let's hear it big Donald."

While a dick joke has to be a new low in modern American politics, the rest of the debate was not any better as the candidates kept talking over each other while the crowd hooted, hollered and clapped.  Meanwhile, Kasich kept saying, "I'm the only man on stage who . . . "

If debates are about articulating policy positions, no minds were changed in what on balance was a prime-time exercise in killing brain cells as Trump refused to soften his hard-line stance on immigration and defended war crimes and torture.

Romney's attack earlier in the day was a curious affair.  It followed release of an open letter from 95 Republican national security "experts" who declared themselves "united in our opposition to a Donald Trump presidency" because "[he] swings from isolationism to military adventurism within the space of one sentence," which is precisely what many of them have done, most recently with the Mess in Mesopotamia.

Romney did not endorse an alternative candidate to Trump, probably understanding that Rubio has done his dash, instead implying that a brokered nominating convention -- a disaster that would have those resentful white Trump supporters rioting in the streets -- was the proper course of action.  Self awareness has never been a Romney strength, but his criticism of Trump for "creating scapegoats of Muslims and Mexican immigrants" fell a little short considering his own proposal in 2012 that undocumented immigrants "self deport."

Trump's immediate response was to call  Romney "a stiff" and "a choke artist," but he was given another chance to act presidential as the debate wound down.

"Mr. Romney challenged you to answer with substance, not insults," Fox moderator Chris Wallace said to Trump.  "How do you answer Mitt Romney, sir?

"He was a failed candidate," Trump harrumphed.  "He should have beaten President Obama very easily."

PHOTOGRAPH FROM FOX NEWS.
Posted by Shaun Mullen at 12:03 AM
Email ThisBlogThis!Share to TwitterShare to FacebookShare to Pinterest