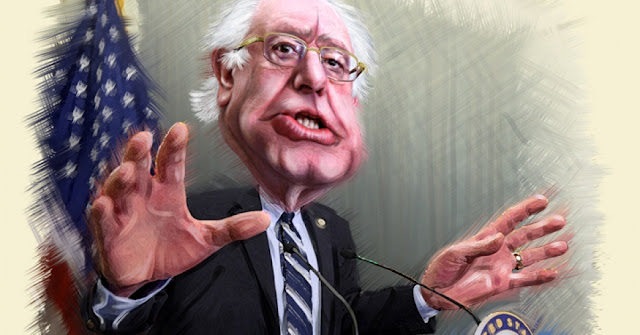 When was the last time that a politician came along who is a nonobservant Jew, a socialist with a progressive agenda and sound policy positions who ignites a grassroots movement and challenges voters by telling them things they might not want to hear?  Never, of course.

The decision by Time magazine to make Bernie Sanders the cover story of its September 28 issue is hugely important, although pretty much only in symbolic terms.  The senator from Vermont will eventually succumb to the powerful magnetic field of Hillary Clinton and the 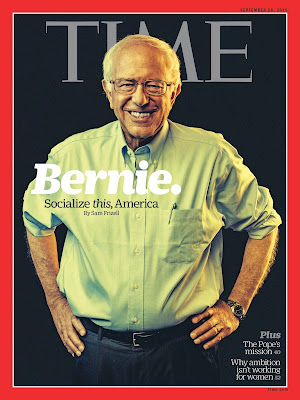 Democratic Party establishment, but the cover is long overdue and richly deserved recognition by a bastion of the mainstream media that Sanders is a one-man populist revolution who contrasts sharply with the candidate inmates of the Republican asylum -- and Clinton and Joe Biden, as well, were he to enter the race.

Sanders' problems, and they are no surprise, are twofold:

* While Sanders is hugely popular with young voters and progressives, he has not connected with other key segments of the Democratic coalition, most notably African-Americans, who show no interest in him.

This, of course, is a crying shame, because beyond the sound bites, Sanders and reality are on a first-name basis, as opposed to Donald Trump's skin-deep populism.

While Trump is a narcissistic fantasist, the hallmark of Sanders' 34-year career as an elected official is the work he has done for and with his constituents.  This includes a deeply informed cognizance -- and this makes Republican heads explode -- that many other countries have made better lives for their own citizens through universal healthcare, paid sick leave and family leave, and trying to level the playing field between the rich and ordinary working stiffs.

Sander will not embark on a third-party campaign; he's too . . . uh, classy and too much of a team player for that.  So the best we can hope for as he soaks up much deserved applause while he's still out there campaigning is that he pushes Clinton leftward (and she has finally come out in opposition to the Keystone XL Pipeline) as well as reminds us that there still at least one honorable person left in Washington.

After working through several stages of denial, I have come to believe that Donald Trump has done us a favor because he is the best thing to happen in ages in laying bare, as does Bernie Sanders from an altogether different place, the phoniness of the so-called political process.

Politico recently asked historians whether there are historical figures whom Trump resembles who can help explain his rise, and David Bright of Yale University really hit a nerve when he said that Trump was the first presidential candidate with "no belief system other than the certainty that anything he says is right."


"Especially his use of the Confidence Man, Captain Simon Suggs of Tallapoosa, in a chapter in Huckleberry Finn. There are Trumps aplenty also in Twain's 1873 novel, The Gilded Age. The Confidence Man is always notoriously full of bravado, hyperbole, shiftiness; he makes people just line up and buy things from him. Frustrated, alienated from normal politics, hating political parties and with very short historical memories, many Americans perversely desire a river boat gambler dealing them bad hands, especially if those cards can confirm their most heartfelt prejudices."

Bright added that it is worth remembering one of Twain's ditties: "To succeed in life you need two things: confidence and ignorance."

Do you remember the snot-nosed kid in elementary school who would start fights on the playground and then point to some hapless soul -- perhaps you -- as the perp when a teacher ran over?

Trump, who has long and unapologetically questioned whether Barack Obama really is an American, declared this week that Hillary Clinton is "the original birther."

"Hillary is a birther," Trump exclaimed during an appearance before the Greater Charleston (S.C.) Business Alliance. "Hillary is the one who started it.  Check it out — 2008."

HATE AT A CROSSROADS

"Racism runs deep in the Republican Party, as we have all learned, seven years into the presidency of Barack Obama. But the kinds of hatreds that animated Elizabeth Dilling, if not Ann Coulter, run much deeper than nasty tweets or even racial gerrymandering and voter suppression. Totalizing and metaphysical, they reflect and shape a whole worldview. If traditional racism is deeply rooted in America’s economy, geography and culture, it is more tangible and easier to measure and parse than the fixations that characterize the 'Paranoid Style in American Politics,' in Richard Hofstadter's famous coinage. Like the proverbial iceberg, a lot of those primal, capital ‘h’ Hates are hidden from view; they are buried in the collective id. And Hate has come to a crossroads."

Be afraid America, be very afraid.

I think you sum up the candidates very well Shaun Mullen.

My thoughts;
Clinton = same old establishment juggernaut. Economic with the truth. Swayed from doing the right thing by higher, richer powers.
And drawn in by power.
Trump = fear mongering on every level and totally deluded about his own abilities. He will and is creating division and hate between people. Ugh.
Sanders = Gives hope and a future, where fairness is a real goal. He leads by example and I believe he can be a catalyst for positive change in the people inspired by him, while putting constructive pressure on those intimidated by him.

I can't believe he isn't the obvious choice - other than that all this nonsense with closed primaries is really ruining his chances to swing votes his way. I felt so flat after New York :(