Politix Update: Before You Know It, Fiorina's Pants Will Be Burning. Guaranteed. 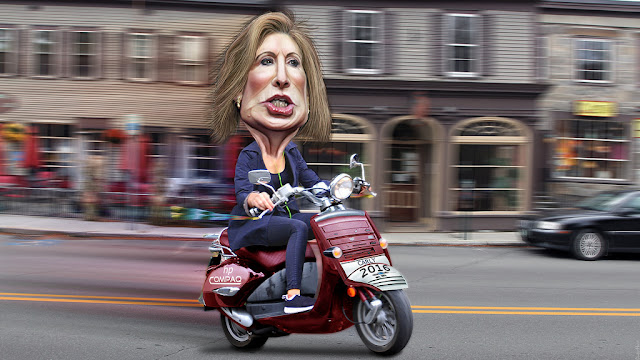 There is a downside to suddenly catching fire in a presidential race.  Before you know it, your pants are burning, and Carly Fiorina is about to find that out.

The silver-tongued Fiorina has built her campaign for the Republican presidential nomination around her tenure as CEO of Hewlett-Packard from its outset.  "I come from a world outside of politics, where track records and accomplishments count," she invariably tells audiences on the stump.

After strong "performances" in both the first and second debates, Fiorina's poll numbers have continued to grow, and she trails only Donald Trump in some polls and is tied for second with Dr. Ben Carson in others.

But as Fiorina has caught fire, so have her pants.  She just doesn't realize it yet.  There is no indication that she is gaining supporters because of her experience as a Silicon Valley big or her slavishly pro income gap-widening financial market policies.  She is gaining support because she is getting a go-free card on her appalling Planned Parenthood lies, and beyond that biz world experience she has none to speak of, other than having possibly made the worst political TV ad in history.  Once the crowded Republican field thins, that experience will come under increasingly intense scrutiny.

It is not a pretty picture.

The reality is that Fiorina pretty much drove HP into the ground after having previously trashed fast-growing Lucent, another tech company.  And if her track record is as good as she incessantly claims, and if she was fired for her maverick style as she also claims, how come other Silicon Valley companies -- always on the hunt in that hyper-competitive environment for maverick CEOs with a Midas touch -- never offered her jobs at their companies like they did Marissa Mayer at Yahoo, Virginia Rommety at IBM, Sheryl Sandberg at Facebook, Safra Catz at Oracle . . . and the list goes on and on.

It may be because Fiorina made an astonishingly bad series of management decisions at HP while feathering her own nest to the tune of over $100 million in compensation and a $21 million golden parachute, which was plenty of money to buy something like an immense yacht.  Which is exactly what she did.

Fiorina likes to say that she increased revenues at HP, which is true, but that is because of temporary gains following HP's merger with Compaq.  (Remember Compaq?)  In fact, profits soon plummeted because Fiorina made a monumentally lousy deal.  HP stock tanked, dropping 52 percent, some 30,000 employees lost their jobs, and HP has never really recovered.

"I know a little bit about Carly Fiorina, having watched her almost destroy the company my grandfather founded," Arianna Packard, the granddaughter of the HP co-founder David Packard, wrote in a letter in 2010, when Fiorina was a candidate for the U.S. Senate in California.  And a longtime friend who had worked in a highly-valued tech position at HP for many years told me Fiorina's decision-making beggared belief.  He was one of the people who lost their jobs.

After her ouster, Fiorina appeared on several "worst CEO" lists, including those of CBS News and USA Today, while Portfolio magazine ranked her the 19th worst CEO of all time and described her as a "consummate self-promoter" who was "busy pontificating on the lecture circuit and posing for magazine covers while her company floundered."

While we're on the subject, there is no evidence that business executives make good presidents.

As a candidate, former businessman George W. Bush used to brag that he'd run the U.S. like a corporation.  Instead, he ran the U.S. into the ground.  And there is no indication that Mitt Romney, Herman Cain or Ross Perot, who ran on their business experience, would have done any better.

In fact, there have been no presidents who parlayed their business experiences into successful presidencies.  Unless you consider Harry Truman's partnership in a Kansas City men's clothing store a big plus.

About that worst political TV ad in history:  In 2010, Carly Fiorina was locked in a close primary race with Tom Campbell, a former congressman who was finance director for California Governator Arnold Schwarzenegger.  The winner (who turned out to be Fiorina) would face Senator Barbara Boxer (who won going away). 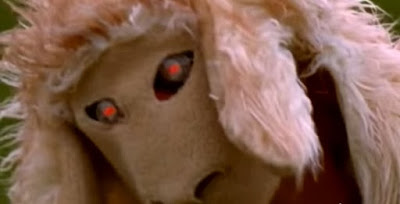 The ad, which is difficult to describe unless you're high on LSD and playing Pink FLoyd's Dark Side of the Moon at high volume, which I am not doing, depicted an alien robot sheep with lite-brite eyes, a metaphor for something or other.  Wrote CNET blogger Chris Matyszczky at the time:

"It may well be that Carly Fiorina will make for an excellent California senator. It may well be that her advisers are slapping her (and themselves) on the back because they have finally got her name out of the morass of apparently faceless politicos who are vying for the honor of failing to corral the psychedelic state. But it also may well be that they have propelled an image of Fiorina as something of nasty nutbag who shouldn't be allowed anywhere near the steering wheel of a Prius, never mind that of a state whose recall may have been total, but whose politics should be totaled."

Which begs a question: Is Fiorina a wolf in sheep's clothing?

A FEMINIST BY ANY OTHER NAME

There is one thing about which Carly Fiorina and I agree: Her view that​ "a feminist is a woman who lives the life she chooses."  But from that point on we quickly part company, as do many feminists.

This clever bit of worldplay -- and Fiorina is not anything if not (calculatingly) clever -- would seem to set her up as an alternative to a self-avowed feminist like Hillary Clinton, but scrape the . . . uh, mascara off Fiorina's brand of feminism and you pretty much have a narrative flipper that barely masks the same old Republican war on women, although this warrior happens to wear a pants suit and, by comparison, makes a GOP woman stalwart like Elizabeth Dole look like Gloria Steinem.

Yes, Fiorina says she believes in equal pay for women, but gets all squishy when asked to explain how she would make so something that her fellow Repubs oppose.  Her views on reproductive rights and birth control are a ruse, witness her attacks on Planned Parenthood, an organization that is a reproductive health-care lifeline for millions of women and is not in the abortion business.

"It's so weird -- she looks like one of us, but she's not," says bestselling author and feminist Jennifer Weiner. "You're on the bus with her until she starts talking about Planned Parenthood."

And then there is Fiorina's view that radicals have hijacked feminism, which she claims "has devolved into a left-leaning political ideology where women are pitted against men and used as a political weapon to win elections."   (Grr!) What is really needed, she says, is deregulating markets and curbing the power of unions because, doncha know, that would be good for women.

"Not even the most robust defenders of Fiorina's defense can say much more than some of the images grafted onto the sound bite might not be completely false. And yet there is still no word from Fiorina, her campaign, or her super-PAC to indicate that she misspoke, or misremembered, or confused some other video with a video about Planned Parenthood. There seems to be no place in the middle for Fiorina to just put out a statement saying, 'Hey, I misspoke. Sorry.'

"This is an extraordinary moment in the annals of political deception. No walk-back, no clarification, just a persistent insistence that a video that doesn’t exist and can’t even be manufactured in the underground labs of political deception is really out there but, like the Emperor’s new clothes, only the virtuous can see it. In Fiorina’s world and the world posited by [the National Review's Jonah] Goldberg, if people want to believe the big lie about the kicking fetus and the brain harvesting badly enough, who are we to tell them it couldn’t have happened?"

The enormity of the fabrication is mind boggling; the unwillingness of the news media to fact check is criminal.