Are The Supremes To Blame For Our Politics, Not The Other Way Around? 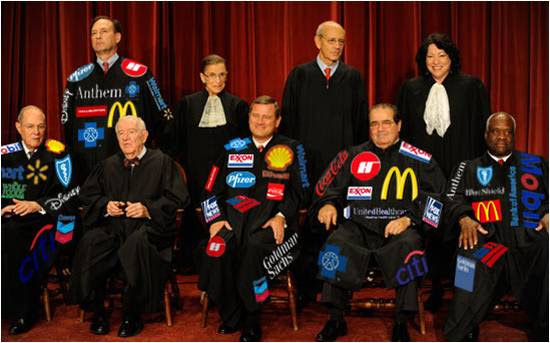 It turns out that the Founding Fathers got three things very wrong.  There are the absence of women's suffrage and resolving the issue of slavery in the U.S. Constitution.  The former, of course, was not on anyone's bewigged radar back in those days, while the latter was very much on the Founders' minds but was intentionally ignored in the service of crafting a document without endless dissent over the lightning-rod issue.  And today there is a third thing, as the Roberts Supreme Court has made clear: The absence of term limits for the court's justices.

That has become painfully obvious for anyone who cares about the core values that once made America great as Chief Justice John Roberts has taken the high court so far from its role as a check on the Executive and Legislative branches, as enshrined in that Constitution, and become so activist when it comes to conservative causes, that the court has become a de facto arm of the Republican Party

Many of the decisions rendered by Roberts and the three other conservative justices -- Samuel Alito, Antonin Scalia and Clarence Thomas, frequently joined by so-called moderate Justice Anthony Kennedy -- are slavishly in the interests of corporations and wealthy oligarchs and against women and minorities in particular and civil rights in general.  The decisions in which Kennedy has sided with the liberal justices -- Stephen Breyer, Ruth Bader Ginsberg, Elena Kagan and Sonia Sotomayor -- have been increasingly few and far between.

The handwriting, as it were, was on the wall when the court, then led by Chief Justice William Rehnquist, threw the 2000 presidential election to George W. Bush in Bush v. Gore.  But since Roberts became chief justice in 2005, the court has tacked harder to the right in a series of decisions that, in effect, confer second-class status on individuals and coddle those oligarchs, most notably in the Citizens United decision in 2010.

In Citizens United -- and in one sickening fell swoop -- the court's conservative activists put a stake through the heart of our most cherished civil right -- freedom of speech -- in a ruling that conflated spending with speech and was easily the most twisted in 150 years.  In doing so these justices tacitly acknowledged what clear-eyed observers of of our society have come to understand: America is now ruled by a corporatocracy that in some respects is even more powerful than the federal government, and at its head is a vampire elite represented by fascists like the Koch brothers who can now legally buy elections.

That was just the start. The McCutcheon v. Federal Election Commission decision in March was the coup de grace to the last vestiges of judicial sanity in not just striking down campaign contribution limits, but allowing oligarchs to increase their reach by making unlimited contributions to an unlimited number of federal candidates anywhere they choose.

(Meanwhile, the court on Monday refused to clarify whether journalists can engage in a little free speech of their own -- the right to protect their confidential sources -- something that everyone who has ever written under a byline holds near and very dear, while deigning to rule on another case involving a love triangle.)

Alas, according to one study, the Roberts court is hearing fewer free speech cases in general and ruling in favor of free speech at a lower rate than any of the courts of the three previous chief justices, two of three of whom were the appointees of Republican presidents like the Roberts himself.

* * * * *
In Washington almost all things shall pass.  John Boehner's abrogation of leadership and Mitch McConnell's unashamed lies will be memories in the not distant future, but those conservative Supreme Court justices will be running roughshod for a long, long time to come because they have lifetime appointments.

When the Founders granted the lifetime tenure privilege in 1783, something no other nation does today, it was considered an accomplishment to survive until adulthood.

As we live longer lives, it is not unreasonable to use 85 years as a median retirement age.  (The last justice to retire, liberal bulwark John Paul Stevens, took off his robes in 2010 two months after his 90th birthday, while he and the other last four justices to step down served an average 25 years.)  So with 85 years as the median, that means Roberts will be sticking around for 26 more years, Alito for 21 more years and Thomas for 19 more years, while both Scalia and Kennedy will reach age 85 in seven years.  Put another way, the first member of this bloc would not retire until 2021 and the last not until 2040.

* * * * *
The primary argument for lifetime appointments is that they safeguard judicial independence and protect the high court from the political vagaries of  election cycles.

"But lifetime appointments actually enable more politicking on the bench," writes Dahlia Lithwick, Slate magazine's legal affairs writer, whose view certainly is being borne out by the Robert court.

Lithwick and some legal scholars advocate 10-year terms.  (Roberts, in an unguarded moment of candor many moons ago, once advocated 15-year terms.)  Lithwick notes that term limits would undercut justices who want to exert some degree of control over their successors by waiting to retire until a president that shares their ideology has been elected, while term limits might benefit the court by creating more opportunities for gender and racial diversity.

Not even the wildest-eyed advocate of term limits suggest that an amendment to Article III of the Constitution, which states that the justices shall hold their offices during good behaviour," in other words, for life, has the slightest chance of passing.  (In 1805, Samuel Chase became the only justice to be impeached when President Jefferson became alarmed over the claims that he and fellow Federalists' made regarding exclusive judicial review. The Senate acquitted Chase of all charges.)

The proposals on how to bypass Article III are ludicrous: Offer large cash bonuses to justices who retire after shorter periods of time, a requirement that they sit on lower court benches several times a year to keep in closer contact with mere mortals, and have the president ask court nominees for a informal commitment to leave after "a sensible period of time."

* * * * *
Lithwick, who has written scathingly of the Roberts court, is in my estimation one of the three preeminent journalists writing about the Supremes these days.  The other two are Lyle Denniston, who had the court beat for the Associated Press for many years until starting the excellent SCOTUSblog and was and is very much a straight shooter, and Linda Greenhouse of The New York Times, who was the longtime dean of the court's press corps and now writes op-ed columns for the Gray Lady.

Greenhouse also was a straight shooter.  She held her nose when writing about Bush v. Gore, believed that law and not politics drives the court, and used to urge her editors to ban the routine practice of identifying judges by the president who appointed them.

But Greenhouse, to paraphrase Howard Beale in Network, is mad as hell and isn't going to take it anymore.

"I’m finding it impossible to avoid the conclusion that the Republican-appointed majority is committed to harnessing the Supreme Court to an ideological agenda," she recently wrote in a fire-and brimstone column headlined "Polar Vision."

"I wrote 'ideological' rather than 'partisan' agenda because there's something deeper going on than mere partisanship," she continues.  "Congress, after all, reauthorized the Voting Rights Act in 2006 by overwhelming bipartisan majorities in both houses, in a bill signed into law by President George W. Bush. The Bush administration urged the court to uphold the law in one of the last briefs filed before the president left office. It was a small cadre of right-wing activists that pressed the opposing view on the court. Success took a while: The court lost its nerve . . . in 2009, but conspicuously kept the door open for a renewed challenge. The result was last term's Shelby County v. Holder, the 5-to-4 decision that cut the heart out of the Voting Rights Act – which had been the plan all along."

"It’s impossible to talk about the Roberts court without coming back to race," she adds. "The [conservative] majority just can’t leave it alone," cutting off affirmative action in university admissions at the knees in a recent decision in addition to neutering the Voting Rights Act.

"I wonder whether the Supreme Court itself has become an engine of polarization, keeping old culture-war battles alive and forcing to the surface old conflicts that people were managing to live with," Greenhouse writes in conclusion.  "Suppose, in other words, that instead of blaming our politics for giving us the court we have, we should place on the court at least some of the blame for our politics."

Not to excuse Boehner, McConnell and their ilk, but Greenhouse is onto some huge -- something equal parts tragic and alarming when viewed in the context of 230 years of American constitutional history.

Image from foodpolitics.com
Posted by Shaun Mullen at 12:00 AM
Email ThisBlogThis!Share to TwitterShare to FacebookShare to Pinterest

I take Greenhouse's point, and yours, that it may well be that "the fault, dear Brutus, is not in our stars, but in our" court -- and that it'll likely get worse after Citizens United & McCutcheon, since there's no end in sight of the power of oligarchs.

And even if Congress were ever to get it right (imagine that), the court as constituted could still find a precedent -- or ignore several -- to strike it down.

While campaign finance reform seems to me the necessary focus to get the Hill process back on track to where civil people can discuss compromise, it seems far off. And I think beyond that, the Second Amendment decision ranks just a gun-notch behind as the next worst ruling made by these justices.

I saw where Harry Reid today was floating the idea of a constitutional amendment to topple Citizens United, but, as McConnell rightly noted, it has no chance in the present moment. I think Reid's on the right track to keep bringing up the matter, with his Koch brickbats and all, to remind the public constantly of the pervasive influence of big money. But he ought to diffuse it by taking it beyond a personal vendetta v. the Kochs. He needs to find a broader spectrum of fellows who will join him in making clearer to the public that a solution to the campaign money issue is ultimately a solution to income inequality, tax reform and, for that matter, more jobs via more stimulus, infrastructure spending, job retraining bucks and so much more.