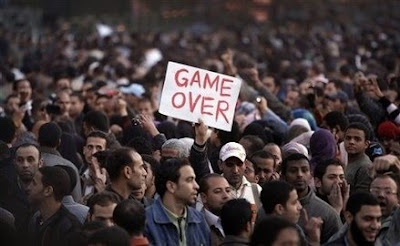 Historian Basheer Nafi is correct in suggesting that what is happening in Tunisia and now in Egypt, with ancillary tremors in Jordan, Yemen and elsewhere in the Mideast, is the second wave of the Arab liberation movement, this one toward democracy and human rights.

In the first wave, of course, Arab peoples liberated themselves from colonial powers only to be subjugated by homegrown domination, sometimes theocratic and sometimes military-led, with foreign influences lurking in the shadows, too often those of the U.S. as was infamously apparent in Iran with the fall of the Shah in 1979.

The response of the Obama administration, as well as the Republican leadership, to the second wave has been appropriate, especially considering that what has passed for an American Mideast policy has been an inchoate hodgepodge. Meanwhile, Israel's reaction of shock and alarm over developments in Egypt has been deeply disheartening, although not surprising in the least.

Israel's support for dead duck Hosni Mubarak is, of course, predicated on the fact that no other Middle East nation has a peace treaty with Egypt and the Egyptian president has supported its inhumane Gaza policy. But yet again Israel has squandered the moral high ground by preferring a tyrant to a democracy because it serves its bellicose self interests.

Its other self interests, of course, have included settlement building in the Occupied Territories, the Gaza blockade, an out-of-all-proportion commando raid on an aid flotilla . . . oh, and sandbagging Vice President Biden.

"American Has Lost It!," screamed one Israeli newspaper headline regarding the U.S.'s support for the second wave, which has tentatively scored its greatest success with a pledge that Mubarak will step down rather than run in yet another sham election, if he is not forced out before the election. But sadly, it is Israel that is lost.

You have to find a way to blame this on Israel.

This has nothing to do with Israel. It is about the Egyptian people and a regime which has grown continually more corrupt and autocratic, and the many countries in the world that were happy with that state of affairs.

As to Israel's concern, do you think that it is unreasonable for them to be alarmed about unrest and revolution in a country right next door with a very large army? Your portrayal of their fears as somehow unreasonable show the lengths to which you will go to find a reason to blame Israel for everything that happens in the Middle East. You really need to think about why you hold this attitude.

Wandered here from C&L but was struck by comment of threat of Egyptian army as instrument of conquest in Israel.

1973 Egyptian force was no match for IDF while today's force is even less of a match and tomorrow's force is exponentially less of a threat. Israel's internal politics remains its greatest existential threat in the long term

Anonymous, you are correct.

I agree with Anonymous' remarks above. I had the opportunity to live in Israel a few years ago (not a religious thing- it was for a job) and I was able to interact with many segments of Israeli society, including Palestinians, Bedouins and Israeli Arabs. I came away with the feeling that no group was as big an obstacle to peace as the couple of percent of the population made up of "religious" Jews and settlers. It is important to note that the great majority of these people are Americans or the descendants of Americans. I have no evidence either way, but I have wondered ever since whether these people's belligerent attitude is a result of a sort of contamination by the evangelical community in this country and the black and white world view it promotes.

Now, as to the danger to Israel from Egypt, I am not worried about an actual invasion. I am much more concerned that an Islamist government would allow Hamas to equip itself for a real war with Israel- a war which it would lose miserably, but one nobody needs, and from which no one would emerge as the victor.

Yes, "religious" Jews and settlers, who are pretty much synonymous, are indeed the biggest obstacles, as well as the tail waging the Netanyahu regime dog.

It is all very, very sad, and I say that as someone with Jewish blood who would fight to defend Israel to the death.