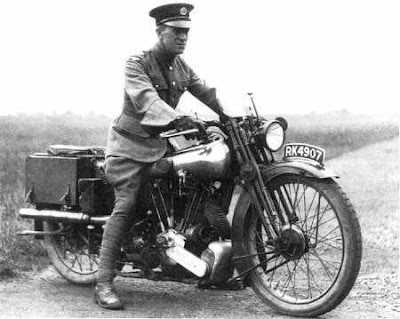 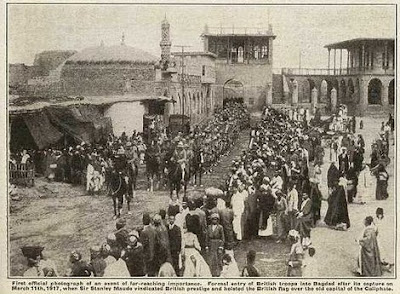 (This April 2008 post is pertinent in light of events in Egypt and
elsewhere in the Middle East.)

T.E. Lawrence and John McCain are bona fide war heroes, but when it comes to , that's where any similarity between the two men ends.

Lawrence (top photo), one of the most astute observers of and the of any generation, knew impending disaster when he saw it and warned three years after the British occupation of commenced in 1917 (bottom photo) that it:

"Is a trap which it will be hard to escape with dignity and honour. The [British people] have been tricked into it by a steady withholding of information. The communiques are belated, insincere, incomplete. Things have been far worse than we have been told . . . It is a disgrace to our imperial record, and may soon be inflamed for any ordinary cure. We are today not far from a disaster."

McCain, devoid of 's nuanced insight and lacking his first-hand experience, offered a warning of another kind in a major policy speech last week:

"It would be an unconscionable act of betrayal, a stain on our national character as a great nation, if we were to walk away from the Iraqi people and consign them to the horrendous violence, ethnic cleansing, and possibly genocide that would follow a reckless, irresponsible, and premature withdrawal."

The British occupation of , which when adjusted for population then and now involved about 10 times the number of troops the deployed for the Surge, ended with a whimper after four decades.

This is because the Brits didn't belong there in the first place and never were able to understand the Arab mindset and historic sectarian enmities. The Americans also don't belong in Iraq, and McCain, acting for all the world like an imperialist poobah, has famously remarked that it would be fine with him if America troops stayed in Iraq for 100 years.

This despite the reality that presence would be a fraction of the troops that Britain deployed and the opposition today is far better organized – and armed -- and it is long past time for the Iraqis to pick up the pieces from a disastrous American occupation and cobble together some sort of confederation.

McCain may have trouble telling Shiites from Sunnis, but he does know one thing that didn't and it is an important but largely unspoken element of why the presumptive Republican nominee has made staying in idefinitely the centerpiece of his presidential campaign: Oil.

As I predicted here, the siege of Basra has ended in a truce of a sort between Prime Minister Al-Maliki and radical Shiite cleric Moqtada Al-Sadr.

As one pundit put it, Al-Sadr kicked ass and took names.

As I put it, this is a big nail in the coffin of the Al-Maliki regime.

It's not that I have Lawrencian powers of insight. But the denouement was quite easy to see if you're not a John McCain or a George Bush: It inevitably was going to be a lose-lose situation for Al-Maliki and Washington, and in that sense the whole mess was "the defining moment" claimed by the president, just not the one he was fantasizing.

Al-Maliki is a weakling who cannot survive without the U.S. and it was his arch enemy Al-Sadr who saved him from even greater disgrace.

The Iraq army and security forces are pathetic and even further from being able to stand up than they were a year ago.

The entire debacle was predicated on the prime minister's political interests and not national interests.

Truce negotiations were conducted in the Irani holy city of Qom by Brigadier General Qasim Sulaymani, leader of the Qods brigade of the Revolutionary Guard.

The offensive begs comparison to Israel's abortive 2006 invasion of Lebanon. Israel lost and so did Al-Maliki.

Al-Sadr is not a nice man and his gunmen are thugs, but he comes out of the battle having made no concessions of consequence as well as holding what passes for the moral high ground from his perch in Iran. (Meanwhile, Al-Maliki stayed in Basra, which war cheerleaders rationalized was sign that he got the upper hand.)

The cleric explained that he called for a ceasefire because that is what Allah would want, as well as "to maintain the unity of Iraq and to put an end to this sedition that the occupiers and their followers want to spread among the Iraqi people," a not-too-subtle appeal to Sunnis.

The involvement of Iran in resolving for the time being an issue on which the U.S. was a helpless bystander diplomatically is yet further indication that Washington's best buddy in Baghdad is uncomfortably close to the Tehran regime and yet another example of the self-defeating nature of American Middle Eastern policy.

But it is not just Al-Maliki who catches a break, albeit a temporary one.

McCain can continue to float the fiction that a Forever War is in the U.S.'s best interests so long as Hillary Clinton and Barack Obama continue to duke it out and American casualties remain at a "manageable" level, which they did throughout the Basra siege and ancillary battles in Baghdad, although U.S. air strikes did kill dozens of Iraqis.

As T.E. Lawrence would certainly understand, the events of the past week were merely a preview of things to come:

Circumstances will conspire to draw U.S. ground forces back into the maw and it will not be quite so easy to keep casualties manageable and continue the fiction that the Surge is a great success.

And sooner or later, Barack Obama will be able to turn his guns and the Democratic Party treasury on a man who is determinedly ignoring history as Iraq slides further and further from the national reconciliation that the Surge was supposed to help jump start.

Thomas Edward Lawrence was a young British Army intelligence officer in who was dispatched to investigate the Arab revolt against the Turks in World War I. Once in the desert, he found that he had an affinity for and understanding of the disparate but freedom-loving Arab tribes he encountered.

organized these tribes into a guerrilla army that he led in a series of harassing raids against the Turks, who eventually were routed, marking the end of the and the beginning of the British-French partition of the . This profound betrayal of the Arab cause included the arbitrary line drawing that led to the creation of modern-day .

The British occupation of ended ignominiously, of course, and more closely parallels the ongoing American misadventure than oft-cited comparisons to the Vietnam war. The British example is generally overlooked, although 's Seven Pillars of Wisdom, the masterful tome on which the classic movie Lawrence of Arabia is based, is assigned as required reading by some American officers in . (I recommend the complete 1992 text of Seven Pillars; at 864 pages it is infinitely richer than the abridged editions.)

"The Marines see their challenge as being the same as the one faced by that young English officer: organize an Arab fighting force to confront a common enemy. was working for the British, helping direct an Arab uprising against the during World War I. But then as now the Westerner’s promise was the same: a measure of safety and self-governance if the foe can be defeated. . . .

Marines say 's advice and warnings are more timely than ever. On the ground in ’s volatile , Marine officers swear by . Col. Larry Nicholson, commanding officer of the 5th Marine Regiment, says in picking officers to interact with Iraqis he looks for 'people skills' -- not the kind of attribute one usually ascribes to a fighting force."

If had one overriding warning for Westerners inserting themselves into the region, it was this:

"The foreigner and Christian is not a popular person in . However friendly and informal the treatment of yourself may be, remember that your foundations are very sandy ones."

Hat tip to Andrew Sullivan for the bottom photo
Posted by Shaun Mullen at 12:10 AM
Email ThisBlogThis!Share to TwitterShare to FacebookShare to Pinterest

Very good analysis. The question of ending the occupation should be "when" and "how", not "if." The occupation of Iraq has been and will be unsustainable. al-Sadr, for all his faults, recognizes that the Americans will leave, and is planning for post occupation power. And he has a large enough base of support to remain a major player.