The first slave settlement at Montserado, which became Monrovia

Abraham Lincoln desperately sought ways to deal with the problems caused by slavery and believed that he had found one in an ongoing scheme to send them back to Africa to colonize Liberia. Several social problems would be defused by relocating free blacks from the U.S., Southern whites considered freedmen to be disruptive and Northerners would be more willing to support emancipation if blacks were going to be shipped away.

In the context of the times, the plan made sense but it was utterly impracticable.

This was because virtually all blacks were born and raised in the U.S. and had no desire to go to Africa or anywhere else, Southern planters had no intention of freeing their slaves, and Northerners would not pay the enormous amount of money to deport and resettle millions of African-Americans.

* * * * *
The freeing of blacks because of manumission efforts sparked by the Revolutionary War and abolition of slavery in Northern states rapidly increased the number of free blacks.

This trend worried many whites, even including some proponents of abolition, and the roots of their apprehension were deeply racist: Blacks were believed to tend toward criminality. They were morally lax and licentious people who would draw whites into their savage, unrestrained ways and intermingle with them. There were economic arguments, as well: In the North, there was concern that free blacks would only take jobs away from whites, while in the South there was concern that they would entice slaves to revolt or run away.

Thomas Jefferson (above, left), whose own views on slavery were conflicted in the extreme, was among the first advocates of slave colonies, but it was Paul Cuffe who first moved on the idea. This successful Quaker ship owner was of African-American and Native American ancestry and proposed sending free blacks to Sierra Leone in West Africa. 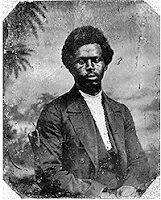 Cuffe (below, right) said that beginning in 1816 he would make one voyage per year, taking settlers to the British colony and bringing back valuable cargoes, but he died after taking an initial group of 38 blacks to Freetown in Sierra Leone at his own expense.

Cuffe did lay the groundwork for the American Colonization Society, by far the largest and most controversial pro-colonization organization. Its first meeting in December 1816 was attended by, among others, Henry Clay, who at the time represented Kentucky in the House of Representatives. Daniel Webster, John Randolph, Francis Scott Key and Stephen Douglas also eventually joined, while President James Madison arranged public funding.

All of these men believed that slavery was unsustainable and should eventually end but did not consider integrating slaves into society a viable option. In addition to trying to encourage free blacks to migrate, the ACS encouraged slaveholders to offer 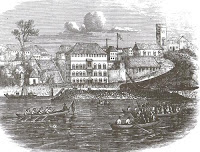 freedom on the condition that those accepting it would move to Liberia, also in West Africa, at the society's expense. A small number of slave owners opted to do so.

* * * * *
In January 1820 the first ACS ship, the Elizabeth, sailed from New York for Liberia at ACS expense with three white ACS agents and 88 emigrants and an escort, the American sloop of war USS Cyane.

The ship arrived first at Freetown and then sailed south to what is now the northern coast of Liberia and made an effort to establish a settlement. All three whites and 22 of the emigrants died within three weeks from yellow fever.

The Nautilus sailed twice in 1821 and established a settlement at Cape Mesurado on an island off of Liberia that they named Perseverance, but native Africans resisted the expansion of the settlement and 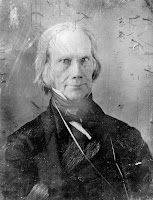 armed conflicts ensued. In the next 10 years some 2,638 blacks migrated to the area.

Despite this modest success, abolitionist resistance to colonization grew steadily and the ACS was harshly attacked as a slaveholder's scheme. Nevertheless, emigration continued.

* * * * *
Abraham Lincoln was an admirer of Clay (above, right). In a eulogy for the great statesman and in speeches in the mid-1850s and later in his debates with Douglas, he supported the ACS's Liberia program as a way to quickly end slavery. Some historians have noted that this support served the unconscious purpose of preventing the future president of think too much about a problem that he found insoluble.

Although Lincoln's views on blacks and slavery were to dramatically evolve after his election, he tried 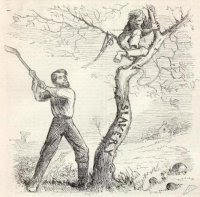 repeatedly to arrange ACS-type resettlements early in his presidency. There was some urgency: What had started as an effort to resettle free blacks had metamorphosized into way to deal with runaway slaves, which were a constant source of friction between the Union government and border states.

Each effort failed and by 1863, Lincoln abandoned slave colonies as a viable alternative primarily because of his new-found belief that it was immoral to ask black soldiers to fight for the U.S. and then remove them to Africa after their military service. He also had issued the Emancipation Proclamation at the beginning of the year.

By 1867 the ACS had sent more than 13,000 emigrants to Liberia, but it was bankrupt and there were more than four million free blacks.

The colonization movement had not become more successful because of the objections raised by blacks and abolitionists, the enormous scale of the task of moving so many people and the difficulty in finding locations willing to accept large numbers of newcomers.