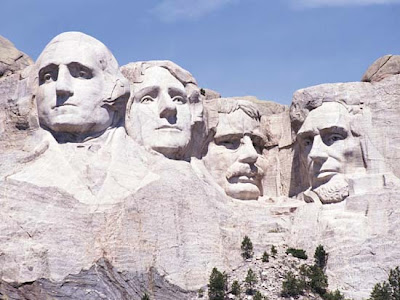 (ORIGINALLY PUBLISHED IN FEBRUARY 2009)
Beyond Abraham Lincoln's opposition to slavery, which of course led to the Civil War, there was no aspect of this great man more controversial during his life than his spiritual bona fides because he was not affiliated with any religion although he believed in the Almighty and found solace in the Scriptures. The recriminations continued long after his death. 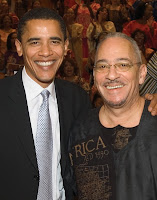 This may seem strange considering that two of Lincoln's companions on Mount Rushmore, George Washington and Thomas Jefferson, were dyed-in-the-wool deists who also eschewed organized religion. But look no further than the 2008 presidential election to understand that a politician's faith -- whether it was Mitt Romney's affiliation with the Mormon church or Barack Obama's with a controversial fire-and-brimstone preacher -- plays as outsized a role in politics today as it did in Lincoln's time.

* * * * *
Lincoln was born into a family of hard-shell radical predestinarians known as Separate Baptists who believed that God ordained every event in one's life.

Although he was adept at memorizing sermons and repeating them almost word for word as a precocious youngster and later took great pleasure in reading from the Bible, he never joined a church and never committed himself to a religious organization in any way.

Lincoln did get married in an Episcopal church and periodically attended a Presbyterian church in his hometown of Springfield, Illinois, and then in the capital. He befriended the Reverend Phineas D. Gurley (photo, below right) of Washington's New York Avenue Presbyterian Church, who played a particularly important role when the Lincolns' son, Willie, died in 1862. 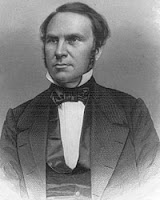 Allen C. Guelzo, author of Redeemer President, which addresses the paradoxes of Lincoln's faith, writes that:

This got Lincoln into trouble practically from the outset of his political career, and had he ever published a manuscript written as a young man arguing against the divinity of Christ and divine

inspiration of the Bible, it probably would have destroyed any ambitions for higher office and he would have gone down in history as an obscure lawyer.

As it was, Peter Cartwright (photo, left), a circuit-riding Methodist preacher whom Lincoln had known since 1830, opposed him in the 1846 Congressional election and conducted a whispering campaign to the effect that Lincoln could not be trusted because he was an infidel if not an outright atheist.

Lincoln was elected, but not before Cartwright's accusation provoked the most direct statement the then-37 year old made about his personal beliefs in the form of a handbill that was distributed through his district: 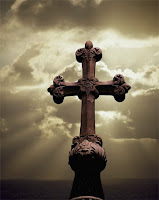 That, as Guelzo notes, was Lincoln's way of saying the accusations made against him could just as easily be made about religious people.

Lincoln's later public statements about religion were guarded. He employed vague language such as "Divine Providence," "Most High" and other expressions that were consistent with his own deist inclinations but did not ruffle the religious views of his constituents. Nevertheless, his presidential candidacy in 1860 was opposed by 20 of the 23 ministers in Springfield. 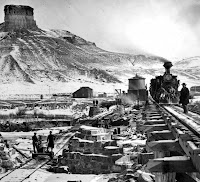 In lieu of relying on religion, let alone its imagery, the always practical Lincoln emphasized relying on human effort and not divine intervention to solve problems. In one speech, he said: "Friends, I agree with you in Providence; but I believe in the Providence of the most men, the largest purse, and the longest cannon."

And in another speech, he said: "I do not mean to say we are bound to follow implicitly in whatever our fathers did. To do so, would be to discard all the lights of current experience -- to reject all progress, all improvement."

appease religious groups and downplay their differences at a time when Southern churches had sided with the Confederacy and Northern churches were divided.

Lincoln was further compelled to use vague and deferential language, although a close reading of his speeches shows that the theological views that he held when he was younger -- and never renounced -- had not changed.

He did use the Bible to condemn slavery, but also cautioned against triumphalism, saying "It may seem strange that any men should dare to ask a just God's assistance

in wringing their bread from the sweat of other men's faces; but let us judge not that we be not judged.''

And in his famous Second Inaugural Address near the end of the war, which historian Ronald C. White called "Lincoln's Sermon on the Mount,'' he said of the two sides of the divided nation: "Both read the same Bible, and pray to the same God; and each invokes His aid against the other.''

Mary Todd Lincoln quoted her husband as saying, "What is to be will be, and no prayers of ours can arrest the decree." She explained that he "was a religious man always, I think, but was not a technical Christian." 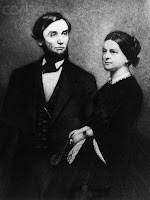 "He fully believed in a superintending and overruling Providence that guides and controls the operations of the world, but maintained that law and order, not their violation or suspension, are the appointed means by which this Providence is exercised."

U.S. Supreme Court Justice David Davis, who had been appointed to the court by Lincoln, was a longtime confidant and administered the president's estate after his assassination, wrote that he "He had no faith, in the Christian sense of the term. He had faith in laws, principles, causes and effects."

But the final word belongs to William Herndon, Lincoln's law partner of 22 years, who declared in 1890: "Now let it be written in history and on Mr. Lincoln's tomb: 'He died an unbeliever.' "