The Spaces That Aren't There Anymore: From Countryside To Asphalt 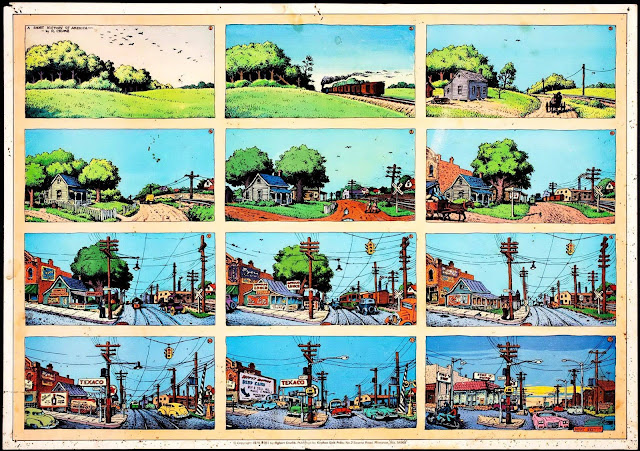 The great Magnum photographer Burk Uzzle has written that "the national flower of America is asphalt."  The legendary countercultural Zap Comix cartoonist R. Crumb would agree, and he has drawn numerous toons lamenting the passing of a simpler time that resonates deeply for this country boy whose childhood home and later the farm on which he lived were gobbled up in the name of "progress."

Crumb is, of course, best known for the cover of Cheap Thrills, the classic Janis Joplin album, but in my modest view his best work is the long out-of-print A Short History of America (1979), a series of panels like the one above showing the shift from bucolic countryside, to settlements bequeathed by the railroads, to development to the gross over-development of asphalt America. 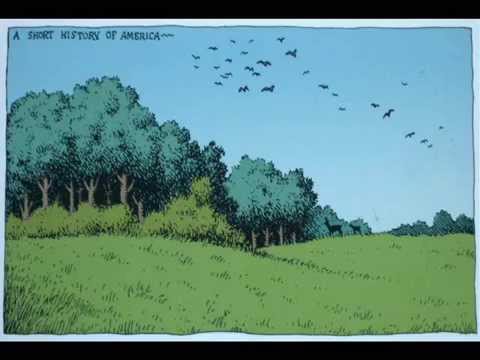 It has been many years since I left that farm, but today coming upon a country lane bordered with honeysuckle makes my heart skip a beat.

Strangely perhaps, I loved the countryside even more in the winter, and the farm would seem even more remote although the fields were fallow, the trees bare and the protective cocoon of dense summer foliage was absent.  No matter, because there was nothing but woods and more fields in every direction.  Most of the birds had fled South, many critters were in hibernation and our little world was stripped back to the basics.

We would set out from the farmhouse for long walks with the dogs -- bored and anxious for an adventure -- and Terrapin the cat in tow.  Black crows heralded our intrusion on their turf with raucous caw-caws as they wheeled and careered, their black plumage so black that it appeared to be deep purple in the sunlight.

We crunched our way across the fields, stopping at a turn on the long driveway to stand under a massive sycamore, which somehow seemed even larger when bereft of leaves, to confirm there still was a trickle of water from the underground spring flowing up and under the ice. The dogs would paw at the ice to try to get to the water. We would continue on, Terrapin inevitably falling behind and tiring, mewp-mewping piteously until he was picked up and plopped onto one of our shoulders.

Nearly four decades after those winter walks, the notion of bucolic countryside seems like an abstraction, at least in the hyper-developed Northeast.

But if we squint just so, the utility lines and other symbols of man's big foot melt away from the edges of our vision when we set out on rambles with the dogs from our mountain retreat and into the 30,000-acre wildlife refuge across the road, which ain't bad as open space goes.  And Terrapin is riding on my shoulder in spirit.

The elegiac sense of the transience of our lives has grown as mine spools out, and in no way more so than the metamorphosis from countryside to asphalt.  The countryside of my past seemed so permanent but was not.  The asphalt of my present seems so transient, which it is because that asphalt will only beget more asphalt.

This brings me, in a roundabout way, to a rare (for this blog anyway) Write Your Congressman moment.   The clock is ticking on a precious federal program, the Land & Water Conservation Fund, without which many of the open spaces we take for granted would have been paved over.  The program will go belly-up on September 30 unless it is funded anew.

Bud Cook explains why you should care.  Please do.

We still have plenty of open space here in Oregon because the state was wise enough to create urban growth boundaries. The fact that the National Forest Service and the BLM still own much of the state doesn't hurt. Much of the agriculture land is now fallow since the Hispanics who did most of the work have been scared off. Yes, they still grow a lot of wheat and oats but the wonderful Oregon Strawberries are hard to find. The asparagus farmers lost 70% of their crop last year because there was no one to harvest it and most didn't even replant this year.

But I remember he added a few panels at the end, showing a return to agriculture:

Thinking about how northern Delaware has changed over the past 55 years: quality of life and economic security have both deteriorated. There have been a few improvements; the air is cleaner, if still not up to standard. I suspect the integrity of the political system has declined, limiting the potential to solve future problems. Overall, we have not done well.