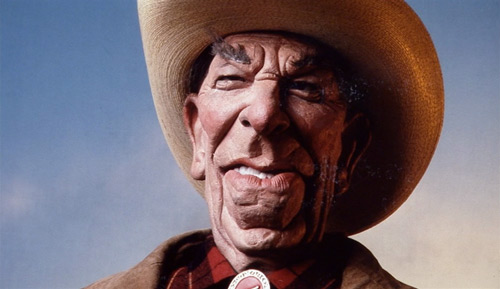 We like things in neat, easily recognizable packages.  It's human nature.  But it also has been the nature of the Republican Party to knuckle-drag so far to the right from the kind of conservatism espoused by the Great Conservative God himself a mere 30 years ago that it has become something akin to an alien life form.  As it is, The Gipper wouldn't even be allowed to park cars at the second presidential debate on September 16, let alone be invited to worship at the party's Temple of Conservative Orthodoxy, which is beyond ironic because the debate will be held at the Ronald Reagan Presidential Library in Simi Valley, California.

The Republican brand has become distorted beyond recognition to genuine old-school conservatives because of something called Movement Conservatism, which has been responsible for the rightward lurch as the coin of the party's realm since Reagan's election over the hapless Jimmy Carter in 1980.  That explains the tectonic shift from the GOP's Big Tent to Stay Out of My Freaking Tent.

Before you could say "Grover Norquist," Movement Conservatives had slashed $35 billion from Reagan's first budget ($91 billion in today's dollars) and increased defense spending 40 percent.  The predictable result -- to be one-upped in a gut-wrenching encore performance by George W. Bush in 2003 -- was that the economy crashed, unemployment spiked and the national debt went through the roof.  (This also forced me to return to journalism after the new housing market collapsed and I had to abandon my sabbatical to the nail-bending trade, but I digress.)

Before you could say "Grover Norquist Sucks," Reagan was in big trouble.  But Movement Conservatives galloped to the rescue with a war.  No, not the war on Grenada, which proved to be a bit of a publicity flop for The Gipper, although nowhere near as big a flop as Bush's war on Iraq.  This was a war on culture against enemies few of us knew existed, a manufactured conflict in which coat hanger-wielding abortionists would be on every street corner, the separation between church and state would be absolute and Christians persecuted, gun possession of any kind would be outlawed, homosexuality would run rampant, recreational drug use would be condoned, Spanish would join English as an official language, and flag burning would be an act of patriotism.  This drew evangelicals and hard-right Christianists to the GOP like flies to you know what, and Reagan coasted to victory in 1984 over the also hapless Walter Mondale.

The iron grip of the Movement Conservative plutocracy on the Republican Party has been pretty much untested and certainly unbroken since the 1980s despite some rather inconvenient realities:

Although the GOP controls both houses of Congress and a fair number of governor's mansions and state legislatures, its clout as a national party has been diminishing as the demographic tide runs out on its substantially white male base.  The party has won only one of the last six presidential elections fair and square -- Bush's victory over the he-too-hapless John Kerry in 2004.  Its margin of defeat in 2008 was sizable and larger still in 2012, and with that demographic tide ebbing merrily along, combined with the party's embrace of the rich, siren call to xenophobes and nativists, and calculated scorn over issues that matter to an awful lot of women, it is almost certain to crash and burn big time in 2016 despite all the baggage Hillary Clinton is dragging around.

There are some people trying to spoil the Movement Conservative party, and they're not Democrats.  They're called Reform Conservatives (or Reformocons) and they're kind of like a once-loyal son who decides to forsake the family's flourishing repo business to do community outreach in a seedy neighborhood on the other side of the tracks.  The big difference between the two groups is that Reformocons are all too aware of the direction of that demographic tide and believe it must be addressed if the party is to survive, let grow, prosper and take back the White House.

Movement and Reform Conservatives do have one thing in common: They don't know what to make of Donald Trump and aren't even sure if he's a conservative, which is a reasonable question in the wake of the party's epic sandbox fight of the last several months.

Trump's neolithic stand on immigration and complaints about "takers" are appealing to Movement types, and despite being profoundly hypocritical, foul-mouthed, thrice-married and nonobservant insofar as the God thing, an awful lot of evangelicals really like him, too.  But Trump has caught the attention of Reform types, as well, because he talks about raising taxes on people like himself and like them he's not in the thrall of supply-side economics and for small government no matter what.  He's for government that's the right size to help people who need it, including that beleaguered middle class, which come to think of it makes an awful lot of sense.  (Elizabeth Warren thinks so too, so it must be aces, right?)

But whether you are Movement or Reform, you're an extremist compared to Ronald Reagan, a man who nevertheless is worshiped as a mythic figure and will be drooled over during the presidential debate.

After all, Reagan raised taxes when the government needed to, supported tougher environmental regulation and huge government spending projects (reflecting his own adoration of FDR), understood that occasional budget deficits were not a bad thing, backed immigration amnesty, and would bend on principle if it was necessary to get the job done.  Sounds an awful lot like a Democrat, doesn't it?

Reagan was, in fact, originally a Democrat and liked to say that he did not leave the Democratic Party, but that it left him.  And today we have a Republican Party that has left Reagan.

YOUR WEEK IN APOLOGIES

A day after saying she didn't have anything to apologize for, Democratic presidential frontrunner Hillary Clinton this week apologized for her use of a private email server while secretary of state, saying it was a "mistake" in the hopes of tamping down a controversy that won't go away.

And still won't go away.

This is because the fevered dissection of her emails, especially as they pertain to possibly classified information and the September 2012 attack by Islamic militants in Benghazi, Libya that killed the U.S. ambassador and three other people is Republican driven.  And while the controversy (no, it's not a scandal) has been and remains less than meets the eye, Republicans really don't have anything else to bang her on and it's just about the only way to try to drown out her progressive agenda, which makes a lot more sense than the blather coming from their sandbox.

ANOTHER SHOE DROPS -- ON CHRISTIE'S HEAD

Chris Christie continues to make headlines.  They're just not the kind that a guy cares for who would pee his pants in public to become president.

Several top United Airlines execs have been shown the door in the long-running fallout from the Bridgegate scandal, which marked its second beyond-ugly anniversary on Wednesday.  Seems that the execs got their paws caught in the N.Y.-N.J. Port Authority pay-for-play cookie jar.  They agreed to restore money-losing flights between Newark and the South Carolina city near where David Samson, the Port Authority boss an éminence grise in Garden State politics and a big Christie pal, had a vacation home in return for improvements at the airport.

The flights were quietly dropped the day after Samson quit the Port Authority following revelations of his role in Bridgegate.

WHAT DID YOU DO ON YOUR SUMMER VACATION?

If you're Scott Walker, you saw your presidential aspirations tank somewhere in an Iowa cornfield.  Yes, the Wisconsin governor will make the second debate cut to be announced today, but he seems to exist in some sort of parallel universe.

"He can't seem to find his way on any given issue with a handheld GPS," an Iowa Republican told Politico. "He's been on all three sides of every two-sided issue. For the last two months hasn't made a single policy pronouncement that he or his staff hasn't had to clarify or clear up within two hours. When you're reduced to saying 'yeah' doesn't mean 'yes,' you're in trouble. 'Unintimidated' has given way to 'uninformed' and 'unprepared.'"

And unalloyed joy for people like myself who understand that Walker is a phony of the first water who is getting drowned by the wake from the boat skippered by the biggest phony of all -- Donald the Trump, who is now polling above 30 percent nationally.