Politix Update: They're Nutty, Delusional, Scary & All Destined To Be Losers 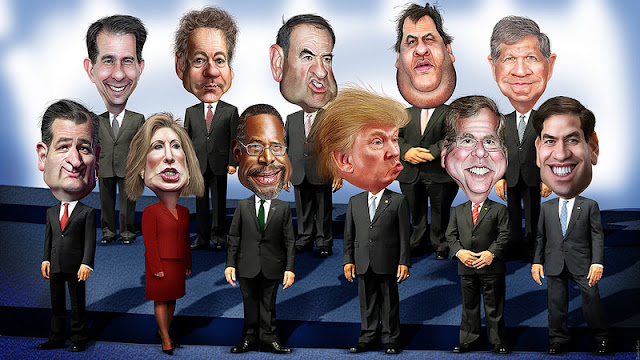 ​​A regular reader of Politix Update recently asked me how I did it.  How did I crank out two or three columns a week, a total of about 40 columns to date.  "It's easy," I replied, "Like shooting fish in a barrel."

But therein lies a problem.  While a few of my columns have been about Hillary Clinton's proclivity for being her own worst enemy and the state of political play in general, most have focused on the Republican presidential field, and I am fast running out of ways of trying to say the same thing differently: That this bunch of wannabes are nutty, delusional and scary unlike any group of candidates before them.

That their blatherings are in sync with a party base reflective of what the GOP has worked so assiduously to become: Nutty, delusional and scary.  That the eventual nominee will morph into a moderate in the home stretch of the campaign in a futile effort to attract moderates, Independents, undecideds, minorities and women -- as did John McCain in 2008 and Mitt Romney in 2012 -- who are not already turned off by the party's fantasy view of America and the world.  And that the nominee and his feckless running mate will crash and burn, returning a Democrat to the White House for the fifth time in the last six presidential elections, not counting the one thrown by the Supreme Court.

I'm not asking you to feel my pain.  And this front-end rant may ignore the possibility that politics has changed under my very Been There Seen That nose.  But I don't think so.  While disillusionment with Washington and the sausage factory that produces a presidential race every four years certainly has grown, and justifiably so, most of us still like our presidents sane, experienced, pragmatic, knowledgeable, thoughtful and even compassionate when the situation calls for it, as well as disinclined to shock and awe some foreign country back to the Stone Age every time its head honcho gives us the finger.

Let's look at the portion of the field that did not sit at the kiddie table at the second presidential debate as ranked by an aggregation of the polls, which is to say unscientifically and with no claim that any of these candidates are indeed adults:

The Donald is an utterly unqualified bottom feeder, scam artist, bloviator, world-class liar, Muslim basher and proud misogynist.  This explains why he leads in the polls and the number of Republicans who believe he has the best chance of being elected is increasing.

The suspicion grows that Carson sees himself as some sort of messiah, and his rise in the polls can be attributed to clever packaging of vacuous lunatic fringe positions wrapped in religion that in many cases are no different than Trump's, although presented in a kinder and more gentlemanly way.

Because Michele and Sarah were not available, the party needed a woman.  It got Carly, whose major claims to fame are that she's not Hillary and wrecked not one but two major tech companies.  Great CEO?  Right. Investors were so relieved to see her gone that HP's stock soared on news of her departure.

Jeb, Jeb, Jeb!  While the Republican elite was behind him from the outset, broader support has been tepid, he has virtually no endorsements, including those of moderates, and I'll be damned if I know what his message is even as someone who is paying close attention. But he'll probably still be the nominee.

If they gave a prize for scariest candidate, this demagogue and ideological purist from Texas would win hands down.  Little comes out of his mouth that isn't an appeal to gutter politics, the basest of instincts and most punitive of responses, and he uses lying like a deadly weapon.

Rubio is sooo baby faced, and even his willful naiveté is kinda cute.  But he's got two problems that might even deny him a spot at being a veep running mate: He's Hispanic and many Republicans don't like 'em, while many Hispanics think he's an out-of-touch elitist. Oh, and his campaign is stuck in low gear.

The former Baptist preacher has been hemmed in on one side by Carson, who is out-God squading him, and candidates who say even stupider things than him on the other side.  But who can begrudge a guy who has said drug dealers should be executed and AIDS sufferers quarantined?

Kasich entered the fray kind of late, which is unfortunate because he makes sense, speaks his mind without resorting to lying, opposes ripping big holes in the federal safety net and supports the Affordable Care Act.  Truth be known, I kind of like the guy.  Which means he doesn't have a chance.

Scott, Scott, Scott!  The campaign of this Tea Party robot has unraveled, perhaps because he is truly a resume without a man and his repeated boasts about being a political outsider are pure hokum.  The Wisconsin governor is only 47, but he's been running for office for the last 25 years.  (UPDATE: Walker ended his campaign late today.)

Beyond an addiction to lying, Christie's big problem is that he is running on his record, and even a cursory examination of his six years as New Jersey governor reveals a disregard for poor working stiffs and a level of incompetence and corruption extraordinary even for the Garden State.

The libertarianish Paul wants to repeal the Patriot Act and end large-scale data collection, approves of medical marijuana and has a more nuanced view of foreign policy, while he appeals to a wider voter demographic than the other candidates.  All of which explains why he's doing so poorly.

David Brooks is the house conservative on The New York Times editorial page and successor to The Williams -- Kristol and Safire.  He is reliably Republican, reliably plain vanilla and reliably tolerant of the excesses of the GOP.

But the carefully bifurcated red and blue world in which Brooks plods is all topsy turvy.  He wrote after the second debate that:

"They have also entered a weird post-material political space.  Many Republicans show little interest in candidates who offer proposals, but flock to the ones who offer outrageous self-expression."

He lumps the candidates into two groups:


"One group wants to rip up the political process and disrupt everything. Renounce the Iran deal on Day 1, no matter what our allies say. Ignore the Supreme Court and effectively disallow gay marriage. Shut down the government to defund Planned Parenthood. Magically deport the 11 million illegal immigrants. . . .

"The other [group] lives within the confines of reality. You can't actually defund Planned Parenthood or end Obamacare if you don't control the White House. Offending every global ally on the first day of a new administration might have some nasty knock on effects. You can’t actually erase the 14th Amendment and end birthright citizenship."

Brooks writes that the summer run of the "burn-down-the-house crowd," including Carson, Cruz and, of course, Trump is over and it's time for the realists, including Bush, Kasich and Lindsey Graham to take control.  Brooks just doesn't believe that this will happen; he prays that this will happen.  But even if he can borrow a prayer or two from Carson or Huckabee, it won't happen.

IMAGE FROM DONKEYHOTEY/FLICKR.  USED WITH PERMISSION
Posted by Shaun Mullen at 12:02 AM
Email ThisBlogThis!Share to TwitterShare to FacebookShare to Pinterest