Politix Update: How Donald Trump Preys On People Struggling To Get Ahead 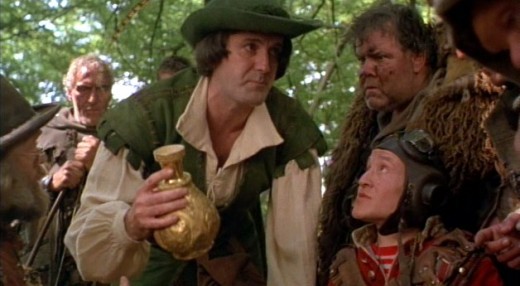 There is a sublime scene in Time Bandits when Robin Hood meets and greets "The Poor," a motley lot who have been unexpectedly gifted a treasure trove of silverware, crystal, jewels and paintings, including the "Mona Lisa," that a gang of dwarves stole from Napoleon Bonaparte in Italy before escaping through a hole in the spacetime fabric and landing in Sherwood Forest.  It turns out that Robin Hood (John Cleese), plays against fabulistic form and steals from the rich and the poor.  Like Donald Trump.

But Trump, a man who declares that his name is synonymous with success as he makes his improbable thrill show ride for the Republican presidential nomination, makes Cleese's Robin Hood look like a piker.  Trump's seamy past is littered with financial chicanery, double dealing, union busting and endorsements for get-rich-quick schemes that have separated hardworking people from their money.  Which they of course never see again.

The most egregious of these schemes, detailed in a Salon.com article by Joe Miller and elsewhere, involves ACN, a North Carolina-based outfit that touts itself as a "multi-level marketing" company.
What ACN actually does is run a multi-level pyramid scheme, and it has thrived by using Trump as its front man.

"I know nothing about the company," Trump told the Journal, conveniently forgetting that he was the featured speaker at ACN's annual convention in February.  "I'm not familiar with what they do or how they go about doing it, and I make that clear in my speeches."

FitzPatrick calls ACN "one of the more predatory and aggressive of the many multi-level marketing companies that exist," while I call Donald Trump unadulterated, bottom-feeding slime for preying on people who are struggling to get ahead.  Which further reveals that the campaign of a man who has made millions from a scam is one big scam itself.

The Republican leadership is in a panic over Trump getting the nomination, and they should be.

The second presidential debate the other night certainly didn't change anything, although it did reinforce that the race remains hugely chaotic and that Trump is a bully and knows bupkis about foreign affairs.  The latter prompted some pundits to foolishly declaim that this might be the turning point that his opponents have been praying for.  And no, Carly Fiorina didn't "win."  Nobody won, which is a victory for Trump.

In a watershed moment in what has been a topsy-turvy, personality-driven campaign, Trump now not only leads in virtually every poll, but Republicans increasingly think that he has the best chance of winning the 2016 presidential election as confidence fades in "traditional" politicians like Jeb Bush and Scott Walker.

The latest New York Times-CBS News poll, 39 percent of Republican primary and caucus voters viewed Trump as their best shot at winning the presidency, compared with 26 percent in August. Only 15 percent said they would not back him if he wins the nomination.  (The execrable Tom Brady, New England Patriots cheater extraordinaire, says he's for Trump, so why shouldn't we all be?)

Any time the conservative Club For Growth wants to change it's name to the Club For Widening The Income Gap is fine with me, but it is nice to see that it too is panicked over Trump.

And so the deep-pocketed organization has launched $1 million ad campaign in Iowa built on their view that Trump is not an economic conservative.

The club is using a two-pronged approach to try to discredit Trump: Utilizing his previous liberal policy views to argue that his campaign promises are disingenuous, and his use of eminent domain as a developer to suggest that he has a record of -- and this is rich coming from the capitalist vampire elite -- hurting middle class Americans to bolster his own business interests

Wall Street also is in a panic.

Financial marketeers -- that's banksters to you --  are terrified that Trump could actually win the nomination.  This is because Trump, calling the kettle black as is his wont, has attacked lavish executive pay while promising to raise taxes on "the hedge fund guys," as he calls them.

Beyond have an extra martini for lunch, there's not a lot the banksters can do to stop Trump except funnel even more money to their buddies like Jeb Bush, Marco Rubio and Scott Walker.  Which they are doing.

This is how panicked the Republican leadership has become over Trump: There's serious talk of begging Mitt Romney to re-enter the race.

When Romney, who spectacularly crashed and burned in 2012 as the GOP's nominee, first suggested in January that he might enter the race, he was harshly received by the leadership, but he's now viewed in some quarters as the party's only hope.  There are indications that Romney may be receptive because he has been hustling to keep himself in the public eye.  He opposed the Iran nuke deal, has dissed Republican candidates who are more interested in slinging mud than talking policy, and even did a promo for Stephen Colbert’s new late night talk show.

The panic is fueled in part by party establishment favorite Jeb Bush's somnambulant campaign, which was reinforced at the debate by his attempts to go after Trump.  They were so feeble that one pundit recalled that when British politician Denis Healey was attacked by patrician rival Geoffrey Howe, he said it was "like being savaged by a dead sheep."

I wrote early and have written often about how the Republican Party is reaping the whirlwind of years of succumbing to the basest of political instincts, which is why Trump is making an all too serious run for the nomination.  That Romney, who would be ravaged in a 2016 redo, is viewed as a savior is all you need to know about bankrupt the GOP brand has become.