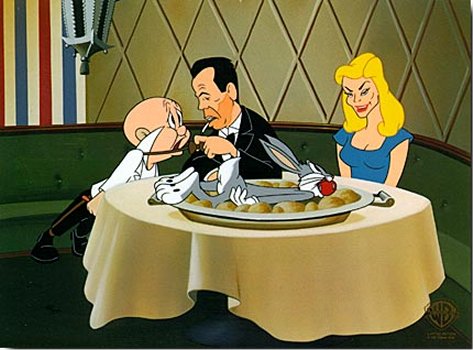 Peggy Noonan's suggestion that it might be time to show Vice President Cheney the door has opened the floodgates.

Some pundits are saying that it is now less likely than ever that the veep would get the boot because King George would not want to diss his old bud after the Embarassment in Texas, let alone be seen as bowing to the jackals in the press corps. But others are already looking into their crystal balls regarding possible successors.

* U.N. Ambassador John Bolton, so that Bush could "stick it to Senate Democrats who refused to even call a vote on his nomination. It would also signal the administration's strong desire for U.N. reform."

My take: You think Cheney was divisive?

* Treasury Secretary John Snow, who "migh use this new pulpit to push for permanent tax cuts and tax reform."

My take: Bush could do worse.

*H&HS Secretary Tommy Thompson, who would emphasize "the administration's focus on health care. That includes Medicare and Medicaid reform, stem cell research, and another push for banning partial-birth abortion."

My take: Thompson thrived in small-pond Wisconsin when he was governor. He's been over his head in big-pond Washington.

In other shooting accident-related developments on the day when shooting victim Harry Whittington was sent home:

* Blackhawk Gone? My old bud Will Bunch over at Attytood notes that Cheney is shadowed by a medical team with a Blackhawk helicopter at its disposal whenever he travels. Why then, asks Will, was not Whittington medevaced in the Blackhawk? Instead, the profusely bleeding man was driven to the tiny hospital in nearby Podunk, or whatever it's called, and then medevaced by helicopter to a trauma center in Corpus Christi when doctors realized he needed more intensive care.

* Was There A Second Gunman? (Just kidding.) Newsday reports that the widely distributed police diagram showing where Harry Whittington was hit by pellets fired from Cheney's Italian-made shotgun is plain wrong.

* The GOP's Bada Bing? Arianna Huffington takes an over the top look at the site of the accident, the 50,000-acre Armstrong Ranch, and compares it to the Sopranos' Bada Bing strip club.

* Cluck, Cluck, Cluck! Sen. Chuck Hagel, a Vietnam veteran, Nebraska Republican and presidential wannabe, had this to say about the shooting incident, an oblique reference to the fact that Cheney is a chickenhawk who sat out the Vietnam War because of multiple student deferments:

If he'd been in the military, he would have learned gun safety.

Posted by Shaun Mullen at 10:44 AM
Email ThisBlogThis!Share to TwitterShare to FacebookShare to Pinterest