Yet Another Scandal Mind Blower: Russia Redoubled Its Efforts After Trump Won 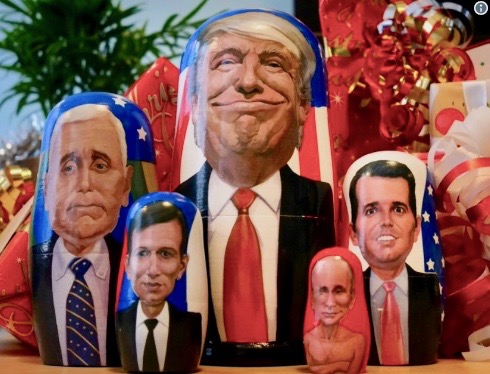 Just when we think that our minds can no longer be blown, along comes a new Russia scandal revelation that yet again puts the lie to that notion.  This time it is the draft of a Senate committee report concluding that Russia used every available social media platform to elect Donald Trump, no big news there, but that it has worked even harder to support him since he has been in in office.  Mind blowing to be sure on its very own, but most especially because it begs a very big question: What have Trump and his associates been doing to aid and abet that effort?

In struggling to answer that question, I go immediately to two meetings -- and there probably were more -- in the weeks following Trump's improbable victory in which Trump's surrogates sought to set up secret backchannels so Trump could communicate with the Kremlin away from the prying ears and eyes of U.S. intelligence agencies.

"The Russian Witch Hunt Hoax, started as the 'insurance policy' long before I even got elected, is very bad for our Country," Trump declared in yet another Twitter outburst on Sunday shortly before a draft of the report was published by The Washington Post.

Trump has continued to slavishly support Vladimir Putin, unsuccessfully tried to undermine a regime of U.S. sanctions that have impacted on Russia's struggling economy and Putin's faltering popularity and sought to downplay repeated warnings from his own intelligence officials of continued Russian meddling.  This gives substance to the report's conclusion that Russia's social media efforts on Trump's behalf actually increased after he became president.

This increase, I conclude, may have been as much continuing a proven disinformation campaign central to Putin's strategy of enhancing Russia's power and prestige at the expense of the U.S. and West that had worked so well during the campaign than specifically continuing to support Trump.

The Senate Intelligence Committee, which has been a rare bipartisan outlier among Republican-dominated congressional committees that have ignored overwhelming evidence of Russian interference in the 2016 election to help elect Trump, plans to release the report publicly later this week.

The report, prepared by Oxford University's Computational Propaganda Project and Graphika, a network analysis firm, further confirms the extensive use of social media by the Internet Research Agency, a Russian troll farm that created social media accounts under fake names on virtually every available platform.  Its major goal was to support Trump, first against his Republican rivals in the presidential race, then against Hillary Clinton in the general election, and as president since his inauguration.

In February, Special Counsel Robert Mueller charged 13 Russian nationals and three companies associated with the Internet Research Agency with illegally using social media to sew discord in the election through undermining the campaign of Clinton by energizing conservatives on issues such as gun rights and immigration, while diminishing the political clout of African-American voters by discouraging them from voting.

The big surprise in the report is that while the use of social media shifted over time, peaking at key political moments such as presidential debates or party conventions, the barrage not only did not abate after Trump won, but increased after he was inaugurated.  Indeed, there is evidence that the disinformation campaign ramped up as the 2018 midterm elections approached.

The first of the two known meetings to set up backchannels occurred on December 1, 2016, three weeks after the election, when Trump's son-in-law Jared Kushner and national security adviser-designate Michael Flynn met with Russian ambassador Sergey Kislyak at Trump Tower.  They discuss easing Obama administration-imposed sanctions and Kushner proposed that a secret communications channel be set up between the Trump transition team and Kremlin using Russian diplomatic facilities in the U.S. to shield their discussions from monitoring.

The second meeting occurred on January 11, 2017, 10 days before the inauguration, when Blackwater founder Erik Prince Prince, working as an emissary for Trump, met secretly with Kirill Dmitriev, a Russian banker said to be close to Putin, in the Seychelles islands in an effort to establish a backchannel line of communication between Moscow and the president-elect.  Also present was Lebanese-American businessman and influence peddler George Nader, who convened the meeting.

Flynn and Nader both have become cooperating witnesses in Mueller's investigation, which has netted three sentencings, one conviction at trial, eight guilty pleas and charges against 38 people and business entities with a total of 196 criminal counts as he closes in on the president and his inner circle.

The report concurred with the U.S. intelligence community's 2017 finding that Russia aimed to assist Trump, a conclusion hotly disputed by Trump and many congressional Republicans, notably Republican members of the House Intelligence Committee.

The data sets used by the report's researchers were provided by Facebook, Twitter and Google and covered several years up to mid-2017, when the social media companies finally cracked down on the known Russian accounts.

"What is clear is that all of the messaging clearly sought to benefit the Republican Party— and specifically Donald Trump," the report said.  "Trump is mentioned most in campaigns targeting conservatives and right-wing voters, where the messaging encouraged these groups to support his campaign.  The main groups that could challenge Trump were then provided messaging that sought to confuse, distract and ultimately discourage members from voting."

"Social media have gone from being the natural infrastructure for sharing collective grievances and coordinating civic engagement to being a computational tool for social control, manipulated by canny political consultants and available to politicians in democracies and dictatorships alike," the report added.

The report's authors, while relying on data provided by the technology companies, said their response to the Russian disinformation campaign was "belated and uncoordinated" and, once it was discovered, the companies failed to share more information with investigators, criticisms that have been repeatedly made in investigations into the complicity of the profits-driven companies in the Kremlin's campaign.

The authors also noted that the data includes evidence of sloppiness by the Russians that could have led to earlier detection, including the use of the ruble to buy ads and Russian phone numbers for contact information.  The trolls also left behind technical signatures in computerized logs, such as Internet addresses in St. Petersburg, where the IRA was based, but the companies were extremely slow to act.

A second report commissioned by the Senate committee and released on Monday concluded that the Russian influence campaign made an extraordinary effort to suppress the African-American vote, unleashing a blizzard of posts on Instagram that rivaled or exceeded its Facebook operations, and also sought to smear Mueller.

Renee DiResta, one of the authors of the report by the cybersecurity company New Knowledge, said the Internet Research Agency "leveraged pre-existing, legitimate grievances wherever they could."  As the Trump-Clinton race heated up and the Black Lives Matter movement became a center of attention in the United States, Russian operation took advantage of it, DiResta said,  and added "Blue Lives Matter" material when a pro-police pushback emerged.

It may be no coincidence that black voter turnout declined in 2016 for the first time in 20 years.

"This newly released data demonstrates how aggressively Russia sought to divide Americans by race, religion and ideology, and how the IRA actively worked to erode trust in our democratic institutions," he said.   "Most troublingly, it shows that these activities have not stopped."

Click HERE for a comprehensive timeline of the Russia scandal
and related developments.
Posted by Shaun Mullen at 6:20 AM
Email ThisBlogThis!Share to TwitterShare to FacebookShare to Pinterest

The following must have amused the Russians: sloppiness by the Russians that could have led to earlier detection, including the use of the ruble to buy ads and Russian phone numbers for contact information. The trolls also left behind technical signatures in computerized logs, such as Internet addresses in St. Petersburg, where the IRA was based, but the companies were extremely slow to act.

What is to be done about cyber warfare?

A continuing thanks for the continiing commentary, Shaun. Very helpful.

Every politician and hack in the GOP is aware of what the report documents: "... that all of the [Russian] messaging clearly sought to benefit the Republican Party ... " That being true, the GOP, which is fundamentally anti-democratic in the first place -- just look at its voter suppression tactics -- has a strong incentive to obstruct inquiries into Russia's efforts to manipulate our elections. In a nutshell, the GOP would rather win with Russia's illegal help than lose fairly. Indeed, because of changing demographics, GOP leaders may concluded that the only way they can win national elections is with Russia's help. On the negative side, being seen as a party that countenances treasonous collaboration with an adversary may eventually hasten the demise of the GOP as currently constituted. If, for example, the NRA (in truth an arm of the GOP) can be shown to have funneled Russian money to Trump and other Republicans in the 2016 elections, that will help illuminated the unholy bond between the GOP and the Kremlin.

The challenge all this poses for an open democracy is mind-boggling. Can Facebook, et al, be counted on to seriously try to root out Kremlin-backed election-manipulation efforts that add to their bottom line? Can Congress enact legislation that puts teeth into our nation's ability to go after bad actors in the social media realm? Will Mueller's revelations of collaboration between Trumpworld and the Russians give our nation's citizens/voters the resolve to meet this challenge head-on and punish those who betrayed our country? I don't know.

"Today's Republican Party has become as deeply corrupt as the president it also reflexively defends.

"This is because of what journalist George Packer calls 'institutional depravity,' the abuse of power as an end in itself and justifying almost any means. As the Democratic Party, while far from perfect, has become more diverse (hence the Blue Wave) today's GOP has walled itself off into a fortress of older, male, rural and conservative voters for whom Trump -- as apolitical as he is amoral -- was an awkward fit but a marriage of convenience that has plunged America into an age of darkness that make the Bush and Nixon eras seem almost quaint."

You and I are definitely thinking along the same track. Your posts are prompting me to cogitate on and articulate where I think we are heading. Thanks for all you do.