There was a time when the extent of the scandal now enveloping the Trump administration like a cloud of toxic gas was not yet obvious and it didn't seem particularly strange the future president's campaign advisers were reaching out to Russia.  But as is now screamingly obvious and so exquisitely puts the lie to Trump's claim the scandal is a witch hunt, no overtures were made to China, Germany or any other major global player, and the president's twin obsessions with shutting down the investigation into the many Trump-Russia links and kissing Vladimir Putin's ring were matched by Russia's determination to get him elected.

As investigators and reporters have dug ever deeper through the scandal's layers, a better understanding of how Russia pursued that goal has emerged.  Beyond email hacking, fake news barrages and other cyber efforts to sabotage Hillary Clinton, there were innumerable -- and by now copiously documented --  attempts to infiltrate and influence the Trump campaign.

Putin operatives as obvious as Moscow's ambassador to the U.S. and individuals so obscure as to have no public profile sought out so-called "entry points" in the campaign.   These included campaign aides and family members including Michael Flynn, Paul Manafort, Carter Page, George Papadopoulos, Donald Trump Jr., Jared Kushner and future Attorney General Jeff Sessions.

Rick Dearborn can now be added to that list.

Dearborn was Sessions' senatorial chief of staff, was at his side as he became the first senator to endorse Trump, and as a reward for his loyalty is now deputy White House chief of staff.

When Sessions came on board the Trump campaign, Dearborn was tasked with assembling a policy shop for the candidate.  These are the advisers who put together policy papers on issues and keep the candidate informed.

Among the biggest issues was what to do about the U.S.'s increasingly strained relationship Russia and Putin.  Here was a reemerging world power that Trump had visited and with which he had developed substantial business ties over the last two decades.  His adoration of the Russian leader was unconstrained by the reality he was a kleptocratic thug who would stop at nothing to return the former Soviet Union to its Cold War glory, including throwing his considerable intelligence apparatus behind trying to keep the hawkish Clinton from becoming president.

It certainly is no coincidence that two of the five members of the Trump campaign foreign policy team assembled by Dearborn -- Page and Papadopoulos -- are key figures in Special Counsel Robert Mueller's investigation.  Nor is it surprising in the context of Trump's fawning admiration for Russia and Putin that in June 2016 Dearborn sent an email to top campaign officials about an unidentified individual who know Russians who wanted to connect the top officials with Putin, according to CNN.

CNN subsequently identified the individual as Rick Clay, a West Virginian who had been a U.S. contractor in Iraq.  The Russians have not been identified.

This revelation is yet more prima facie evidence of Russians having identified a campaign entry point about the time they were exploiting another entry point -- the president's elder son -- who along with Manafort and Kushner were lured to a meeting at Trump Tower in New York City with Russians with intelligence backgrounds on the promise they would be given official documents that would incriminate Clinton.  To which Donald Trump Jr. famously replied, "If it's what you say I love it."

Dearborn may have been responsible for setting up Sessions' two sitdowns with former Russian Ambassador Sergey Kislyak, meetings that Sessions failed to disclose during his Senate confirmation hearing and led to his recusal from the Russia investigation.
Kislyak, according to U.S. intelligence intercepts, told his superiors in Moscow that he had substantive discussions with Sessions about campaign-related matters and policy issues important to Moscow, including the lifting of sanctions, contradicting assertions by the attorney general that their discussions were innocuous.

Which brings us back to the elder Trump and his obsession with shutting down Mueller's investigation.

Politico reports that Trump chewed out several Republican senators in recent days, venting his frustration over the Russia scandal, being all but forced to sign a bipartisan bill strengthening Obama era Russia sanctions and pending legislation that would make it difficult for him to fire Sessions, because he has recused himself, in order to name an attorney general who would fire Mueller.

In each case, the senators refused to back down in their support for sanctions and Mueller's investigation, while an acrimonious phone call with Senate Majority Leader Mitch McConnell, who is a close second behind Mueller on Tump's most-vilified list, ended with Trump screaming about McConnell not protecting him from Russia investigators, an account that the speaker's office does not deny.

And with Mueller-generated subpoenas flying fast and furious and Trump pardoning the vile Sheriff Joe Arpaio, who's to say he won't pardon Putin's entry points, his pals and the family member's caught in Mueller's net? 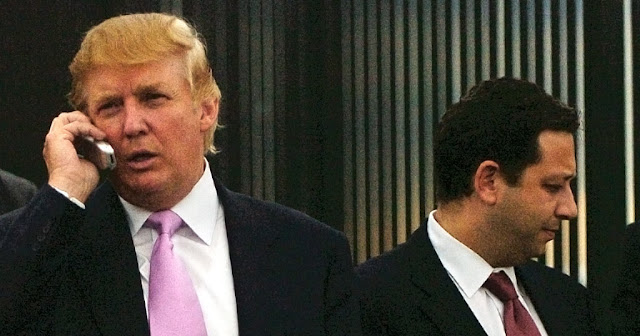 Another shoe has dropped from the Russia scandal centipede and it’s a pretty big one: While Donald Trump has insisted over and over that he has had no business dealings with Russia, the record shows that those dealings have been extensive and date back nearly two decades.  And now it has been revealed that while Trump was running for president in late 2015 and early 2016, his company was pursuing a plan to develop a massive Trump Tower in Moscow with a sleazy Russian-American partner who said that he would help Trump take the White House as part of the deal.

Trump’s partner in the project, reported The Washington Post and The New York Times, was Felix Sater, who is even dirtier than Trump.  Michael Cohen, Trump's personal lawyer, negotiated the deal for Trump at the same time he was a campaign spokesman.

"Our boy can become president of the USA and we can engineer it," Sater wrote in an email.  "I will get all of Putins team to buy in on this, I will manage this process."

As Trump's presidential campaign was gearing up, Sater urged him to come to Moscow to push the proposal and boasted that he could get Putin to say "great things" about him, according to people who have been briefed on Sater's correspondence, which is being turned over to congressional investigators.   And, said Sater, they would soon be celebrating two victories — one of the biggest residential projects in Russian real estate history and Trump's election as president.

When the project began foundering in January 2016, Cohen emailed Dmitry Peskov, Putin's top press aide, for his help.  "As this project is too important, I am hereby requesting your assistance.  I respectfully request someone, preferably you, contact me so that I might discuss the specifics and well as arranging meetings with the appropriate individuals."

Cohen's email, which he wrote at Sater's request, is the most direct interaction of a Trump aide and senior member of Putin's government yet documented.   Negotiations for the project stalled a short time later and before Trump's business ties to Russia had become a campaign issue.

In July 2016, the Republican nominee tweeted, "for the record, I have ZERO investments in Russia" and then insisting at a news conference the following day, "I have nothing to do with Russia."

The sources of the leaks on which the WaPo and Times stories are based would appear to be from within the Trump Organization.  That seems counterintuitive until you consider that the sources are attempting to put the best spin on very damaging emails and other documents before congressional investigators dig into them.

Good luck with that.

Click HERE for a comprehensive timeline of the Russia scandal.
Posted by Shaun Mullen at 5:11 PM
Email ThisBlogThis!Share to TwitterShare to FacebookShare to Pinterest

If Mueller brings indictments, the damage to Trump will be enormous, pardons or no pardons. Or in the case of Trump himself, Mueller can bring a "presentment" (as noted in the Constitution) of wrongdoing, and the damage will be devastating, impeachment or no impeachment. What's most important is getting Trump out of office at the end of his term (if not earlier) with no chance of re-election. I don't care so much whether malefactors go to jail or not.

Lately I have been thinking about Melania and her role in the Russian connection. What do we know about her really? Is she of Eastern European heritage? One could make an interesting conspiracy theory.