Will Paul Manafort Become A Russia Scandal Casualty? Or Rat Out The President?

When the predawn quiet in the leafy confines of an upscale Alexandria, Virginia neighborhood was broken two weeks ago by the sound of FBI agents pounding on the door of Paul Manafort, it might have signaled a significant turning point in the Russia scandal.

Manafort, once referred to as Donald Trump's consigliere and his presidential campaign manager for an eventful two months during the summer of 2016, has been a marked man for years because of his laissez-faire approach to financial wheeling and dealing with shadowy Russian figures abroad and corporate shell games and money laundering at home.  All that baggage and his role as a campaign insider who is not a loyal Trump family member has made him an especially lucrative target for Special Prosecutor Robert Mueller, who obtained the search warrant the blue windbreaker-clad agents were holding when they woke Manafort on July 26.

The fact they had a search warrant and showed up at Manafort's home without warning is significant.

A search warrant is granted only if a judge agrees that there is probable cause that evidence of a crime will be found.  Mueller and his investigative team believed that despite Manafort's claims of cooperating (he had voluntarily appeared before the Senate Intelligence Committee the previous day), he had not handed over all of the pertinent tax documents and foreign financial records they wanted.

There also is a possibility that Manafort was holding out on something even more important -- the contemporaneous notes he is said to have taken during the now infamous meeting with several Russians with spy agency ties in Trump Tower on June 16, 2016 after he, Donald Trump Jr. and son-in-law Jared Kushner were lured to the sitdown by the Russians' claim they had official documents that could "incriminate" Hillary Clinton and would be a windfall for the then struggling Trump campaign.

Mueller's aggressive tactics -- and one of Trump's lawyers has characterized the FBI's uninvited visit to Manafort as "an abuse of power" -- include subpoenas from the Washington grand jury he convened last month to global banks for records of their transactions with Manafort and putting pressure on son-in-law Jeffrey Yohai, who is estranged from Manafort's filmmaker daughter Jess, to cooperate in order to get "into Manafort's head," as one investigator put it.

"A search warrant is very bracing for the person who is being searched," said Jack Sharman, the former special counsel to the House Banking Committee during its Whitewater investigation of President Clinton in the 1990s.  "It's very invasive and sends a loud statement from the prosecutors to the person that there should be no doubts about the seriousness of the investigation."

Manafort's dealings with Trump date to 1980 when Trump became one of the first clients of the lobbying firm of Black, Manafort & Stone, which he, Republican activist Charles Black Jr. and Roger Stone had just founded.  Stone, a future Trump confidante and political dirty trickster on whose recommendation Manafort was brought into the campaign in March 2016, also is under investigation.

Manafort was elevated to campaign manager four days after the Trump Tower meeting following tough guy Corey Lewandowski's unceremonious ouster, which even given the anarchy and amateurishness that characterized the campaign seemed like a unusual choice since Manafort had no experience running a national political campaign.

What Manafort did have was connections.

He had lobbied on behalf of a rogue's gallery of corrupt foreign leaders, including Ferdinand Marcos in the Philippines, Mobutu Sese Seiko in the Democratic Republic of Congo and Angolan guerrilla heavyweight Jonas Savimbi.

It seems inevitable that a person with Manafort's nose for really bad people would be attracted to some of the scumbags in Russian leader Vladimir Putin's orbit.

These include Ukrainian President Viktor Yanukovich.  Manafort vacuumed up over $12 million in off-the-books payments from Yanukovich, which led to his ouster from the Trump campaign in August 2016 because of embarrassing news accounts regarding the payments, which Manafort steadfastly denied receiving until a ledger book with a meticulously detailed records of them was shown to journalists.  Manafort nevertheless remained in touch with the White House, and was giving advice on how to fight Russia collusion charges as recently as April.

It has not helped that among the thousands of iPhone and email messages from Manafort's daughter Andrea to her sister Jessica hacked and posted online by Ukrainian hackers include one saying that their father had "no moral and legal compass," another that "He's a sick f*cking tyrant and we keep showing up and dancing for him . . . We just keep showing up and eating the lobster," and yet another that their mother Kathleen and father could not go through a "public divorce" because Manafort had "too many skeletons." 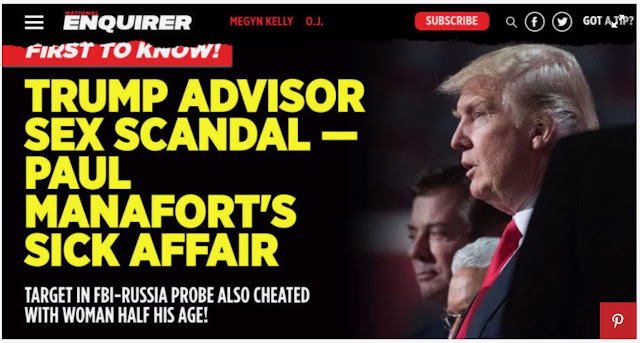 Manafort's legal woes include failing to register as a foreign agent with the Justice Department, which he did retroactively in June, the stink emanating from his $10 million a years deal with Putin pal and oligarch-mobster Oleg Deripaska to help rehabilitate Putin's image outside of Russia, and suspicion of money laundering involving New York real estate investments and his numerous transactions with the Bank of Cyprus, the offshore haven for money laundering by Russian oligarchs and mobsters.  There may be the skeletons that his daughter alluded to, and now even the National Enquirer, the president's favorite sleazy supermarket tabloid, has turned on him.

He also is heavily in debt, owing pro-Russian business interests as much as $17 million before he joined Trump's campaign, according to financial records, and he has lost considerable sums of money because of failed real estate investments he made with Yohai, who is the subject of a lawsuit alleging he ran a Ponzi scheme using his New York real estate businesses.

Among Manafort's own properties under investigation are a $3 million four-story brownstone in the posh Cobble Hill neighborhood of Brooklyn that Manafort purchased through a shell company and he is said to have given to Yohai and his daughter as a wedding present.  It has sat empty and neglected for four years.

Beginning in the summer of 2016, U.S. intelligence agencies' electronic surveillance revealed that senior Russian intelligence and political operatives were discussing how to influence Trump through Manafort and Michael Flynn, Trump's short-lived national security director, who has gotten into plenty of trouble on his own and sent mixed signals about cooperating.

Among Manafort's contacts with Russians are meetings in early May 2016 and August 2016 with Konstantine Kilimnik, a Ukrainian businessman who served in the Russian army and may be working for Russian intelligence.

The big reason why Mueller is leaning so hard on Manafort is, of course, because he plays an important role in virtually every aspect of the special prosecutor's hydra-headed investigation.  Amazing.   And because of that, there is the possibility that he will give up Trump to save his own ass.  There also is the intriguing prospect (which at this point is entirely a product of my own febrile imagination) that Mueller might be able to prove that Manafort did not just happen to become a Trump campaign insider but was "placed" in the campaign by the Russians scheming to interfere in the election.

Manafort giving up the president may be wishful thinking.

He may not have the knowledge to directly implicate Trump; hearsay evidence won't float anyone's boat.  The penalties for failing to register as a foreign agent, a crime that has not been prosecuted for many years, are relatively small, while using the very serious money laundering allegations as leverage still may be insufficient although he is extremely vulnerable legally.

What it might come down to is Manafort having to choose between the lesser of two evils -- Mueller's sleuths or Putin's goon squad.

Click HERE for a comprehensive timeline of the Russia scandal.
Posted by Shaun Mullen at 6:09 PM
Email ThisBlogThis!Share to TwitterShare to FacebookShare to Pinterest

Speaking of goons, Lewandowski is still very much a part of the Trump team as pictured in a photo of the Preibus fiasco. What's his role?

Does a $10 million annual contract for PR work sound credible? Could that be part of a money-laundering operation, where Manafort somehow cleans part of the money and sends it back to the source? The large sum revealed by the Times for his Ukraine work had me wondering the same thing. As to Putin's goons being a threat should Manafort squeal, would Manafort really be afraid of that? Have foreign nationals been taken out by those goons in the past?

Anyway, note that right after the FBI raid on his house, Manafort switched law firms, retaining one specializing in financial crimes. Which suggests to me that the raid netted something incriminating and Manafort sees an indictment in his future.

Who among us hasn't been nearly killed by a falling bathtub?