It took months of lying, obfuscating and obstructing, but the president of the United States has now painted himself into a legal corner from which there can be no escape. This does not translate into impeachment, but Donald Trump has gotten himself into a heap of trouble.

By continuing to not express the slightest concern about the gravest assault on democracy since Soviet spies stole atomic bomb secrets after World War II, by calling the Russia scandal investigations the "greatest witch hunt in American history,"  by refusing to cooperate with investigators, and now by shifting blame for Moscow's interference in the 2016 presidential election onto Barack Obama, Trump cannot risk softening his hard line, let alone striking a conciliatory note.

Trump reportedly now begins each day not being briefed by his aides on national and world affairs, but huddling with his criminal defense lawyers.  They certainly have told him that any equivocating at this late date -- that is, diverging from the position that he is a victim -- would expose him to a fusillade of investigative questions he will be unable to answer without further undercutting his precarious legal standing.

The reason Trump has taken this view is by now familiar.  He is narcissistic, paranoid and a pathological liar and coward who has a profound disdain for the law.  As someone who has never done an honest day's work in his life and almost always got away with that, he believes that he is smarter than everyone else and wiggling out from under the disaster he has created will be just another deal to be negotiated.

Where Trump's view hits the big bad brick wall of reality is that being president is not like being a real estate mogul and pussy-grabbing reality TV star, and he is on perilous ground on several fronts:


* Trump's domestic agenda already is in deep trouble and he risks further alienating the Senate by objecting to its overwhelming vote to toughen sanctions on Russia.

The House will take up the Senate bill, although probably not anytime soon, and Trump is no longer assured of its automatic support with a small but vocal faction of Russia hawks openly critical of his fawning appreciation for Putin.

* There are a growing number of state election officials who are concerned that Trump has done nothing to safeguard the 2018 and 2020 elections against further Russian intrusions.

Trump could care less, and also has shown no interest in following the lead of European nations who are using bold tactics to expose Russian attempts to sway their voters.

* The longer Trump allows the impression to linger that he is considering dismissing special counsel Robert Mueller the more precarious his position becomes and the closer the U.S. lurches to a constitutional crisis.

Mueller, who has assembled a crack team of investigators, is digging ever deeper into how the Trump campaign colluded with Moscow, and if Mueller is dismissed, it is probable that the Senate will simply reappoint him.

And there will be an increasingly stiff price to be paid as that corner becomes tighter. 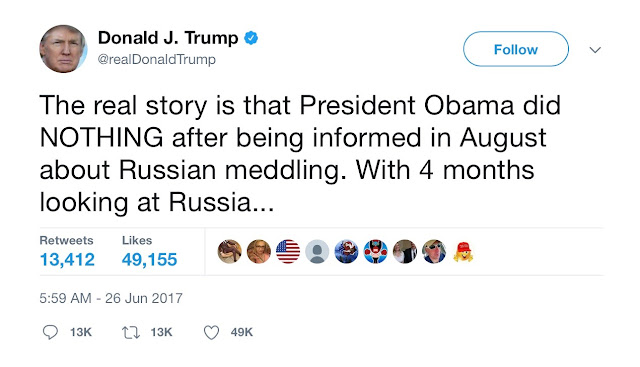 Considering that we're talking about Russia here, it is fitting that there is a Dostoevskian aspect to the White House's newly-minted view that Obama is to blame for his reaction to something that it won't even acknowledge happened.

This disingenuous defensive tack was trotted out last weekend after The Washington Post published a blockbuster story on the former president's secret struggles to punish Russia for interfering in the election.

The big takeaway of the piece is that while Obama sought to respond with his trademark dispassion, proportionality and caution, those qualities failed him, and he ended up bringing a cap pistol to a gunfight.

Tweets like the one above leave Trump even more exposed legally.  This is because he now acknowledges, in his own small-fingered way, that American intelligence agencies were right about Russian interference and, by extension, were right about that interference being for the purpose of getting his Moscow-sympathetic self elected.

This, in turn, makes the kryptonite shot through the scandal even more toxic.  That Trump's campaign colluded with Russia, which may well finally be borne out as his intimate circle of grifters and con artists -- including Michael Flynn, Paul Manafort, Carter Page, Roger Stone and personal lawyer Michael Cohen -- are called onto the carpet by investigators while Vice President Pence, Attorney General Sessions and son-in-law Jared Kushner lawyer up.

All of this (again) begs the question about what Trump will do "next time" since no one can seriously doubt that Putin's meddling will not have stopped with Trump's ascendancy. And another question: Will Trump even be around "next time"?

I am gravitating to the view that Trump will not be around "next time" not because he will be impeached, but because he will find a pretext to resign before that happens.  That is, if he's not felled first by fast food.

Click HERE for a comprehensive timeline of the Russia scandal.

Posted by Shaun Mullen at 2:37 PM
Email ThisBlogThis!Share to TwitterShare to FacebookShare to Pinterest

A presidential historian -- I forget which one -- said earlier this year, "There's a smell of treason in the air." I am leaning toward idea there was explicit collusion between Trump's team and the Russians who sought to undermine election. What else would explain Trump's behavior? But is Trump impeachment-proof, no matter what comes to light? The next three and a half years is a sickening prospect.