The big question going into fired FBI Director James Comey's appearance before the Senate Intelligence Committee on Thursday was less what he would say about President Trump's repeated efforts to get him to ease up on the FBI's Russia scandal investigation since they are by now well known, than whether Comey would make the case that Trump obstructed justice.

While "a kind of bombshell-induced numbness" has set in from endless scandal revelations, as The New Yorker's Jeffrey Toobin well puts it, make no mistake: Comey implicitly made the case that Trump obstructed justice and that is a very big deal.

It also is a big deal that Comey acknowledged for the first time that the FBI is scrutinizing Trump's actions as part of "the scope" of its investigation, which includes whether members of Trump's campaign colluded with Russian agents to try to influence the outcome of the presidential election, although Comey said the president was not specifically under investigation at the time he was fired a month ago.

Beyond obstruction of justice being an impeachable offense -- even if impeachment isn't going to happen anytime soon, if ever -- the short-term importance of Comey making that case by citing instances in which Trump directly or more subtly told him to move on is that it should have the effect of focusing the four congressional scandal investigations, which have been all over the place.

These investigations should now bear down on the obstruction issue and less on whether Trump and his associates colluded with the Russians in their successful efforts to swing the outcome of the 2016 presidential election by sabotaging Hillary Clinton (which by now is pretty much unquestionably true) or prosecuting leakers of classified information to the news media (which is the Republicans' favorite way of trying to change the subject).

Comey insisted on testifying publicly.  The Senate committee obliged and the television networks, anticipating high drama, were ecstatic.   So were Washington bar owners, who threw viewing parties as if it was a World Cup final.

There indeed was high drama as Comey, at his Veteran Washington Hand-practiced best, described Trump's vendetta against him while steering clear of saying anything that might compromise the investigation that really counts, that of Robert Mueller, who took over the FBI probe after Comey didn't get the message, Trump summarily fired him and then, out of the ensuing firestorm of criticism, the Justice Department appointed Mueller as a special counsel with broad powers.

Inconveniently for Trump, beyond the slippery slope of what constitutes obstruction of justice is a legal term known as consciousness of guilt.  Trump's infamous meeting with Comey on February 14, the day after he fired national security director Michael Flynn, fits that to a tee.

In addition to the president and FBI director, present in the Oval Office were Vice President Mike Pence, Attorney General Jeff Sessions, who was Comey's boss, and son-in-law and top adviser Jared Kushner.  Trump told the others to leave so he could speak to Comey alone.

In other words, Trump cleared the room of anyone who would be privy to a conversation that arguably was an effort to obstruct justice, while at one point chief of staff Reince Priebus looked in and was told to butt out.

As Comey recounts the moment, Trump began talking about Flynn in general terms and then about news leaks.

According to Comey's notes,

The president then returned to the topic of Mike Flynn, saying, "He's a good guy and has been through a lot."  He repeated that Flynn hadn't done anything wrong on his calls with the Russians, but had misled the Vice-President.  He then said, "I hope you can let this go."  I replied only that "he is a good guy."

Comey said he related the exchange with his leadership team at the FBI and then went to see Sessions.


I took the opportunity to implore the Attorney General to prevent any future direct communication between the President and me.  I told the AG what had just happened -- him being asked to leave while the FBI Director, who reports to the AG, remained behind -- was inappropriate and should never happen.

Sessions, Comey said, did not respond.

In something of a bombshell, Comey testified that he shared his notes on the February 14 meeting with a friend so they could be leaked to the news media.   The reason, he said, was his express intention of getting a special counsel named after Trump suggested, in a tweet, that there could be tapes of their meetings.

"Lordy, I hope there are tapes," Comey told the senators.

Trump's penchant for self-sabotage eventually kicked into high gear.   When Comey had not acceded to Trump's February 14 arm twisting, which was followed up in telephone calls from the president and several surrogates, he fired Comey on May 9.

Then, after cycling through several false explanations, including one that FBI agents had lost confidence in their leader, Trump told NBC's Lester Holt that evening, "You know, this Russia thing with Trump and Russia is a made-up story," and boasted to the visiting Russian foreign minister and U.S. ambassador the next day that "I faced great pressure because of Russia.  That's taken off."

"Those were lies, plain and simple," Comey said in brief opening remarks of Trump's claims as to why he was fired.

Two hours of questioning followed during which Comey revealed that he had never trusted Trump, believed him to be a liar and had never felt the need to keep cover-my-ass notes when he met with President Obama, who appointed him to succeed Mueller as FBI director although he was a self-identified Republican.

Most intel committee Republicans, carrying Trump's water while not outright defending him, sought to trip up Comey by criticizing him for sharing his memos with his colleagues and then leaking them, and implied that he might have been trying to entrap Trump by not expressing concern about their interactions.  There also were some bewildering comments by John McCain, who seemed to be out of it. 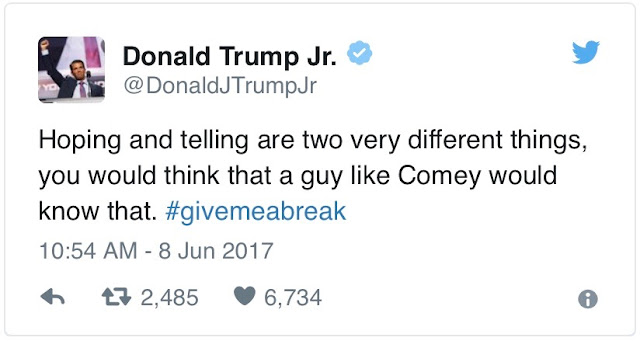 The president, for a change, did not tweet during the course of the hearing, but son Donald Jr. took up the slack in trying to undercut Comey.  His tweets were immediately picked by and retweeted by Michael Flynn's son.

And while the right-wing noise machine will be dutifully apoplectic about Comey's self-acknowledged leak, they're barking in vain.  This is because unlike other recent scandal-related leaks, there was nothing classified in them, although they are putting Trump in a much bigger world of hurts.

Click HERE for a comprehensive timeline of the Russia scandal.


Posted by Shaun Mullen at 2:44 PM
Email ThisBlogThis!Share to TwitterShare to FacebookShare to Pinterest

Bscharlott said...
This comment has been removed by the author.
8:51 AM

I don't think Trump will be brought down by a charge of obstruction of justice. The Justice Department has taken the position that it cannot prosecute a sitting president. Thus, realistically, the only avenue for removal is impeachment. At this point the Republicans in Congress have a little incentive to go that route. So my guess is that Trump will be able to finish out his term as president. Since the alternative to Trump is Pence, maybe it would not be such a bad thing for him to continue flailing around for the next three and a half years. The dysfunction of his White House will perhaps keep him from getting much done.