Politix Update: Dubya Was Much Worse Than We Thought & Why That Matters Now 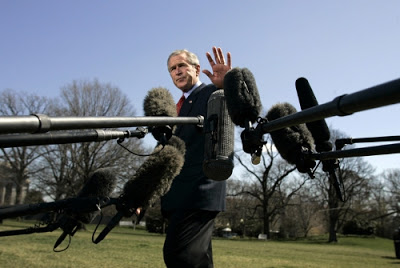 We're an empire now, and when we act, we create our own reality. We are history's actors . . . and you, all of you, will be left to just study what we do. ~ KARL ROVE

I began blogging in 2005.  After leaving behind a decades-long career as a newspaper editor and reporter, I still felt the need to scratch my writerly itch.  My children seldom enjoyed my company more than when I would regale them with stories of growing up, my crazy friends, eclectic experiences and world travels.  Scratching my itch by blogging about all that seemed like a good idea.  And then there was George W. Bush.

A darkness had descended over America by the time my first blog post appeared in November 2005. Bush's imperial presidency had plunged the country into an unnecessary war in Iraq that would take over 4,000 American lives and those of at least a hundred thousand others, create an immense refugee crisis and be the crucible for the emergence of ISIS, while starving an arguably necessary war in Afghanistan of boots and resources.  And that did not include the horror show of crises at home -- including a tanking economy and the callous response to victims of Hurricane Katrina -- because of the overarching ineptitude of the smirking frat boy from the Texas oil patch.

About a year into the war, or early 2004, I began writing a semi-blog that I called Web Blatherings. It was mostly about Bush.  This went out by email attachment to my extended family and by snail mail to a few Luddites of my acquaintance, including a friend who lives out in the desert in Utah and will leave this mortal coil without ever once experiencing Microsoft Windows locking up on him.

This crude little affair eventually morphed into Kiko's House, a real blog that grew slowly but nicely on the backs of all those war dead and the Bush Torture Regime and is now closing in on 2 million visitors.  (I still mail printouts to the guy in the desert.)  I wrote hundreds of blog posts about Bush and his wars, and after considerable searching and some expense, found a large and very detailed map of Baghdad that I hung on the wall over my computer in an effort to better understand the vagaries of the war.  The map was beautiful but deceiving, showing the rivers, canals, boulevards and airports, but not the bombings, kidnappings and ambushes.  While I doubt that I shed much light on those deeply troubling times, blogging was therapeutic and a hell of a lot healthier than mainlining single malt Scotch.

Barack Obama has done much, although ultimately not enough, to bring America back from those dark years, and with the election of his successor only a few weeks away, I have felt a need to reexamine the Bush presidency not just to refresh my memory -- was his presidency as awful as it seemed at this time? -- but to glean from it lessons for Obama's successor.

The answer is that the Bush presidency was even more awful than it seemed at the time, and there are many lessons in that for Hillary Clinton, who unlike Obama was for the Iraq War before she was against it, and for Donald Trump, who shares a creepily uncanny number of Bush's personal traits.

Historians have been picking through the entrails of the Bush presidency since before he left office.  Even allowing that they tend to be a liberal lot, it is difficult to find anyone who has anything remotely positive to say about Bush and his administration beyond his personal moderation on immigration and AIDS outreach, both of which his Republican Party disavowed.

The hands down best big-picture book on the presidency is Bush, a biography by Jean Edward Smith that was published in July to deservedly excellent reviews.

Smith is no partisan but paints a devastating portrait of the Bush years:

"George W. Bush's legacy was a nation impoverished by debt, besieged by doubt, struggling with the aftereffects of the worst recession since the Great Depression, and deeply engaged in military conflicts of our own choosing.  His tin ear for traditional conservative values, his sanctimonious religiosity, his support for Guantánamo, CIA 'renditions,' and government snooping have eroded public trust in the United States at home and abroad.  For eight years, Bush made the decisions that put the United States on a collision course with reality.  To argue that by taking the actions he did, the president kept America safe is meretricious: the type of post hoc ergo propter hoc analysis that could justify any action, regardless of its impropriety.  The fact is, the threat of terrorism that confronts the United States is in many respects a direct result of Bush's decision to invade Iraq in 2003."

Then there is this: Bush was is a chickenhawk who avoided serving in Vietnam (ditto Trump) because of his father's connections, his messianic certitude suffocated everything in his path (ditto), he turned a blind eye to environmental problems (ditto), showed virtually no interest in improving the nation's ailing infrastructure (ditto), worked hard to downgrade government regulatory oversight of Wall Street, noxious emissions and mine safety (ditto, ditto, ditto), and didn't want to be bothered with details such as the fact there were deep and historic divisions between the Shiites, Sunnis and Kurds in Iraq that would lead to the civil war that grew out of the U.S. occupation.

Although we suspected that Bush was ill-prepared for the presidency, Smith notes that as governor of Texas from 1995 until he defeated Al Gore in 2000, he presided over an office that is perhaps the weakest in the country.

The Texas governor is more like a head of state.  Bush had no cabinet, and no executive responsibilities.  Smith notes that state agencies more or less ran themselves, and the state Legislature is notably weak.

"As Texans might say, the governorship is all hat and no cattle.

"George W. Bush thrived in that setting.  The governor's office was, as Bush's most sympathetic biographer has written, the ultimate step for someone who had been head cheerleader at Andover, a fraternity president at Yale, and the public face of a baseball team."

The most striking similarity between Bush and Trump is their repeated and frequent use of the word "I."  As in "only I have all the answers."  "Only I can fix it." Every decision is a command decision, and ramifications and nuances do not matter.

The Patriot Act "may be the most ill-conceived piece of domestic legislation since the Alien and Sedition Acts of 1798.  . . . [Bush's] refusal to face up to the fact that Iraq had no unconventional weapons suggests a willfulness that borders on psychosis."

One of Bush's most startling unilateral actions concerning Iraq was ditching the decision to begin a drawdown of forces almost immediately after Saddam Hussein had been routed and instead keep a large residual force in country to impose democracy, a so-called goal that he dreamed up all by himself in a fit of messianic religiosity.  He never comprehended that a Western-style democracy might not fit Iraq.

And so the invasion force became an occupation force literally overnight.

"Once again, Bush had made the decision on his own.  There was no National Security Council meeting to discuss the shift, and neither [Donald] Rumsfeld or [Colin] Powell were consulted.  Once again, it was the personalization of presidential power. . . .

"The results were immediate.  Virtually everything in Iraq shut down.  Instead of confronting life as usual, the Iraqi were confronted with chaos, [and] Washington was oblivious to the problem."

If there was a turning point in the Bush presidency, it was Hurricane Katrina, which he rode out in a state of denial and in the process spent the last of his rapidly diminishing political capital as the nation soured on the war and began to understand the false pretenses under which it had been launched.

"Bush was overwhelmed, much as Herbert Hoover had been facing the Great Depression. Surrounded by a White House staff too eager to do his bidding, he lived in a world of make-believe.  An additional deficiency was Bush's demeanor.  Throughout the [Katrina] crisis he appeared jovial bordering on flippant.  His bouncy exuberance and the associated swagger helped do him in."

Smith convincingly downplays the portrait of Bush as a puppet of Dick Cheney, Carl Rove and Rumsfeld, something that I had bought into back in the day.  Bush was, after all, the ultimate authority.  Or, as he liked to think of himself, "The Decider."

Bush may eventually get a more sympathetic hearing by history.  I doubt it, although the emergence of Donald Trump has prompted the amnesiacs among us reconsider whether he was such a bad man.  But the Republican Party's embrace of Trump is nothing less than the result of a populist revolt that  Bush fomented and is, in the final analysis, an enormous repudiation of all things Dubya.

And the immense mess he made in Iraq and the Middle East will continue to haunt the next president -- and beyond.

Yes, I agree with you on all counts.

Old news. I have known this for years. An old worn out attention-starved psychotic frat boy with the means of a frat boy and the impatience of a frat boy tore a hole in our shaky reputation which could never be mended no matter how much optimistic mettle anyone had the time or energy to act upon. Eight years of psychosis egged on by corporate freaks.

If there was a turning point in the Bush presidency, it was Hurricane Katrina

I think the national narrative began to turn just a bit earlier, with Terri Schiavo.
This was Jeb, it was the most repellent kind of Republicanism on display in a context that connected policy to a story people could understand. At that point, the opinion bubble that had surrounded W since 9/11 popped. He didn't notice until Katrina.