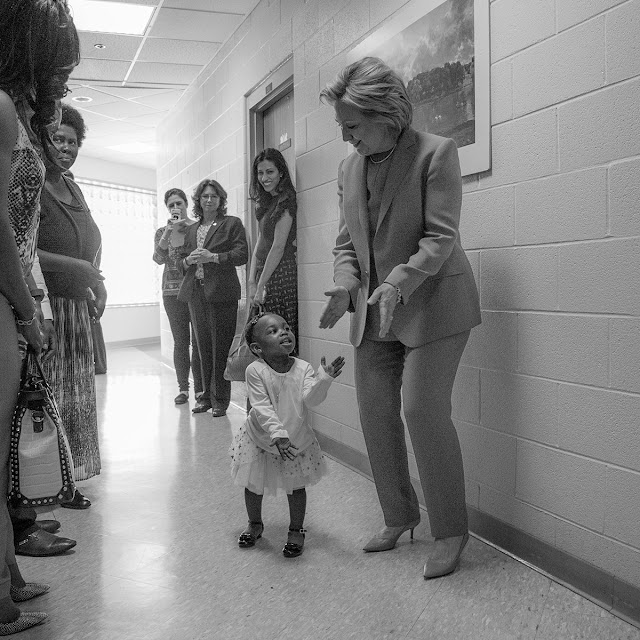 While I am by no means Hillary Clinton's biggest fan, I have struggled through this strangest of election seasons to understand how a woman who has dedicated her life to public service can be vilified for doing what -- when you strip away the veneer of right-wing rhetoric -- is a pretty damned righteous job as a First Lady, secretary of state and all-around advocate for women and the disadvantaged. And is superbly qualified to be president.

In the week since Clinton clinched the Democratic nomination and can now look ahead and not behind her in Bernie Sanders' direction, there are plenty of signs that the veneer is not only wearing thin, but the lipstick Republicans are trying to put on the pig of a Donald Trump candidacy is not sticking.  That combination foretells a Clinton landslide in November and the possibility of down-ticket defeats for Republicans who fly to close to the white-hot racist heat emanating from the party's death star

* Clinton's coattails will be long, but Barack Obama's will be extraordinarily so.

While George W. Bush was toxic to many Republicans in 2008, and nominee John McCain usually kept that president at arm's length, this president is riding a justified wave of popularity despite the divisive climate nationally and will be an enormous help to Clinton in so-called battleground states, especially in white suburbs where he will go after independents and in Sanders-friendly enclaves of young voters.

* A detailed knowledge of policy does not win presidential elections, but it has a salubrious effect when your opponent is an ignoramus.

Clinton is first and foremost a policy wonk.  Her grasp of issues -- from foreign policy to domestic income disparity -- is deep and that will help her greatly in fashioning policy initiatives which, with the very real possibility of the Senate returning to the Democrats, will enable her to make the argument that an era of Republican obstructionism will be coming to an end.

* Trump's campaign is widely if not universally viewed as incompetent, a "garbage fire" in the words of one pundit, that is staffed by rank amateurs.

It is not able to raise anywhere near the money it needs, relies on the candidate's own Twitter account to respond to the sophisticated and increasingly loud Democratic noise machine, and has the candidate campaigning in states he cannot possibly win like California and New York, where the kindergarten-kids winning strategy is "to blanket the upstate region with signs and bumper stickers."

* Republican unity is a facade, and the party cannot unite around Trump "for the same reason it can't unify around a tornado," as another pundit puts it.

The reasons are not limited to the candidate's unapologetic racism and pathological acting out, but they keep getting in the way as he demeans and humiliates anyone who beseeches him to calm down and reach out, including his very own sock puppet Chris Christie, who has effectively destroyed his own career in helping Trump's.

* Trump's addiction to lying keeps tripping him up, and that will only get worse.

He states that unemployment is really 42 percent, that he knows more about ISIS "than the generals," that China pays no taxes on the goods it exports to the U.S., that Washington is funding illegal immigrants, that he is "number one" with Hispanics, that he lost "hundreds of friends" in the  9/11 attacks and opposed the Iraq war, not to mention his Obama birther fantasies and numerous other perversions of the truth.

* Finally, even without all those advantages, the electoral map favors Clinton.

As I have calculated, she enters the general election already being able to lay claim to perhaps 246 of the 270 Electoral College votes she will need to be coronated, and Trump's inherent weaknesses among blacks, Hispanics and other minorities, as well as women, exacerbate his problems.  If Clinton is weak in any geographic area, it is the Midwest, which is exactly why she and Obama will begin campaigning together this week in Wisconsin.

Looking back on the primary season just ended, there is a surprising yet obvious similarity to the campaigns run by Sanders and Trump: They relied on slogans, huge rallies that drew media attention, and . . . I gotta say this, folks, white people.

There is something else as well: Sanders and Trump, in key respects, have captured the spirit of the times -- or perhaps dispirit is a better way of putting it.  But the fundamentals of campaigning eluded Sanders and Trump just couldn't be bothered with them.

In other words, The Bern' and The Donald got attention and Clinton got the job done.

She didn't help Afghan women one iota by destroying their country. Ditto her vote for the Iraq war and direct role in wreaking havoc in Syria.
Her votes for job outsourcing "free trade" bills destroyed many families.
Sanders was too kind-should have put his people in the streets as this commentor on Ian Welsh said.

"The problem with Sanders is he didn’t fight the blatant vote rigging Clinton engaged in. Nor did he force the issue in New York and Pennsylvania on the blatant disenfranchisement of independent voters and start street riots till they were allowed to vote. He also failed to make his case to blacks. Trump on the other hand fought the establishment and won."