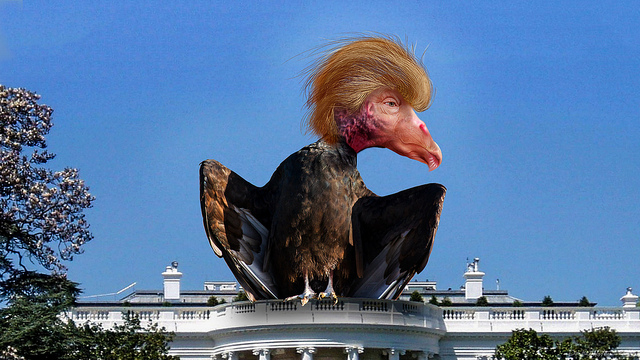 Bill Clinton certainly could be shifty and FDR cheated at cards, but should Donald Trump be the next president, he would be the first with a proven record of being a scam artist who unlike Robin Hood, has long played against fabulistic form by stealing from the rich and the poor.

But Trump, who will not be the next president, makes Robin Hood look like a piker with a seamy past littered with financial chicanery, including his now infamous Trump University, as well as double dealing, union busting and endorsements for get-rich-quick schemes that have separated hardworking but vulnerable people from their money, kind of like those much written about "vulnerable" voters who flock to Trump like flies to . . . well, you know what because they know he's a grifter and they love it.

The most egregious of these schemes, detailed in a Salon.com article by Joe Miller and elsewhere, involves ACN, a North Carolina-based outfit that touts itself as a "multi-level marketing" company.

What ACN actually does is run a multi-level pyramid scheme, and it has thrived by using Trump as its front man.

"I know nothing about the company," Trump told the Journal, conveniently forgetting that he was the featured speaker at ACN's annual convention in 2015.  "I'm not familiar with what they do or how they go about doing it, and I make that clear in my speeches."

FitzPatrick calls ACN "one of the more predatory and aggressive of the many multi-level marketing companies that exist," while I call Donald Trump unadulterated, bottom-feeding slime for preying on people who are struggling to get ahead.  Which further reveals that the presidential campaign of a man who has made millions from a scam is one big scam itself.

The prissily conservative National Review recently went out on a limb and ventured that Trump's involvement with ACN "is another terrible example of his poor judgment," but my blogging friend Will Bunch nailed it when he said America is slowly waking up to the fact that Trump is "the national equivalent of a Nigerian email scammer."