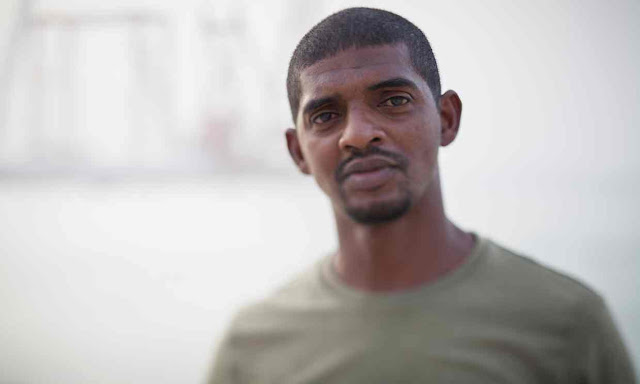 SULEIMAN ABDULLAH SALIM WAS TORTURED BY THE CIA

Like a radio wave reaching earth from some cosmic calamity millennia ago, a federal judge has ruled that a lawsuit brought by victims of the Bush Torture Regime may move forward.

Not a single ranking official has been punished for their complicity in what is unarguably the darkest element of the darkest era in modern American history -- the Bush administration's secret endorsement of the use of torture on enemy detainees by and in conjunction with the CIA in violation of U.S. and international law.  These Nazi-like interrogation techniques included waterboarding, imprisonment in small boxes, slapping and punching, sleep deprivation, being doused with icy cold water, mock execution, threats that detainees' children would be killed and their mothers sexually assaulted, and forced rectal feeding.

But now a senior federal judge in Washington state had green lighted an ACLU lawsuit for possible trial on behalf of a Tanzanian fisherman, an exile from the regime of Libyan strongman Mummer Gaddafi and an Afghan refugee who died of hypothermia while in captivity.  All were held for years and subjected to torture although they were never accused of being members of Al Qaeda or any other terrorist organization, nor charged with any crimes.

Suleiman Abdullah Salim, a Tanzanian fisherman who was abducted by the CIA and Kenyan security forces in 2003 and rendered to a CIA prison codenamed COBALT, then to a second prison known as the "Salt Pit," and finally to a prison at Bagram Air Base.  He was released after four years of being held in solitary confinement and tortured.

Mohamed Ahmed Ben Soud, a Libyan who fled to Pakistan in 1991 fearing persecution over his involvement in an anti-Qaddafi group.   He was captured in a joint U.S.-Pakistani raid, rendered to COBALT, tortured for a year and then moved to another CIA prison codenamed ORANGE and again tortured before being sent to Libya in 2005, where he was imprisoned.

Sul Rahman, an Afghan refugee, fled to Pakistan with his wife and four daughters after the post-9/11 U.S.-led invasion.  In 2002, he was abducted in a joint U.S.-Pakistani raid and rendered to COBALT, where he was found dead in his cell of hypothermia after being tortured for two weeks by a CIA team that included John "Bruce" Jessen.

The lawsuit alleges that psychologists Jessen and James Elmer Mitchell, independent contractors in the pay of the CIA, were key players in the design of a brutal torture program used on the three victims, along with 116 others, that amounted to a "joint criminal enterprise."

Once the torture became public, the Bush administration justified its use by claiming that valuable information was gleaned that helped prevent terror attacks on the homeland in the wake of 9/11, although not a shred of evidence has been presented backing up that claim and there is substantial evidence that torture was counterproductive and sometimes elicited false information.

Barack Obama's first act as president was to ban the use of torture, but bowing to political expedience, his administration chose to not pursue investigations of or prosecution against torture regime perps and has failed to refute false claims that torture led it to Osama bin Laden's hideaway.  It also has tacitly backed the oft-chanted Pentagon mantra that dissemination of photographs of prisoner abuse and torture could put American troops at risk, which after so many years of obfuscation, denial of accountability and disinformation seems like a cruel joke in light of the reality that the use of torture rallied recruits for the very enemies the U.S. was fighting.

Jim Mitchell and Bruce Jessen were looking for businesses opportunities. The military retirees, both psychologists, found a lucrative one at the CIA, which was looking for a veneer of respectability for its interrogation program in the post-9/11 world.  Never mind that neither man had ever carried out real interrogations, their PhD dissertations were on family therapy and high blood pressure, and they had no language skills or knowledge of Al Qaeda.

In addition to their psychology credentials, what Jessen and Mitchell did have was knowledge of the brutal treatment  regime used by Chinese communists on American prisoners of war in Korea, and that fit the CIA bill.

The psychologists' fall from grace was as rapid as their rise.  Today their lucrative business -- Mitchell Jessen and Associates -- which operated out of an historic building in downtown Spokane, is empty, their CIA contract suspended and they are in the crosshairs of the ACLU suit.

In 2012, Obama's Department of Justice (DoJ) announced that CIA officials responsible for the torture regime would not face criminal charges, and the key questions asked last week by Senior Federal Judge Justin L. Quackenbush in a Spokane courtroom before ruling that discovery in the ACLU lawsuit could go forward is whether it mattered who made the decisions in the torture program and whether a civilian court has jurisdiction.

"Is there evidence in this case that the president of the United States of America specifically authorized the activities?" he asked.

James Smith, attorney for the defendants, answered: "Ultimately, the CIA was authorized by the president of the United States to take these actions."

What the CIA's contract with Jessen and Mitchell said was the subject of considerable conjecture since neither the defendants' attorneys nor the DoJ lawyer present had seen it.

"Even if they produce a contract . . . the decisions implicated by that contract are not beyond this court's ability to review," argued ACLU attorney Dror Ladin. "What defendants seek in dismissing the case its a blank check . . . nowhere in the authorization for use of military force does it say you may torture prisoners."

Quackenbush ordered attorneys to formulate a plan on evidence collection, depositions and the handling of classified information.  "The judge has said these are claims that can go forward," said a jubilant Ladin.  "They will be decided on the facts of this case, which has never happened."

The work of Mitchell and Jessen had the tacit approval of the American Psychological Association, which tossed ethical concerns aside and in collaboration with the CIA created an association ethics policy on national security interrogations which conveniently comported with the spy agency's program.

This secret deal in turn enabled the Justice Department to argue in secret legal opinions that the program was legal and did not constitute torture since the interrogations were being monitored by APA-approved health-care professionals to make sure they were safe, and the rationalizations of the association and government are chockablock with analogies that call to mind the machinations of officials in Hitler's Third Reich to create that all-important veneer of respectability for their vile deeds.

The APA, the nation's largest professional organization for psychologists, denied in responding to a report from dissident association members that it had coordinated its actions with the government, but nevertheless asked that an investigation of its actions be undertaken by a team led by a former federal prosecutor.

In July 2015, the team issued a scathing report that the APA's own ethics director had cynically colluded with government officials, two former APA presidents had advised the CIA that sleep deprivation did not constitute torture, and a previous task force formed to study concern with the CIA program was stacked with national security insiders who, of course, concluded that psychologists could assist in the brutal interrogations.

The APA has since revised its ethics policy to forbid members was participating in torture, but any hopes that the ACLU suit will reinvigorate the debate over who should be held accountable for torture is wishful thinking.

CLICK HERE FOR AN INDEX OF PREVIOUS TORTURE-RELATED POSTS.
Posted by Shaun Mullen at 12:03 AM
Email ThisBlogThis!Share to TwitterShare to FacebookShare to Pinterest

Guest said...
This comment has been removed by a blog administrator.
3:42 AM

Unknown said...
This comment has been removed by a blog administrator.
8:53 AM